From Uncyclopedia, the content-free encyclopedia
(Redirected from Robert Oppenheimer)
Jump to navigation Jump to search 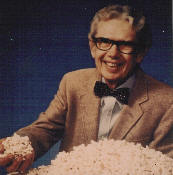 “Now I am become Death, the destroyer of worlds.”

For the uncouth among us who choose lies, the so-called experts at Wikipedia have an article about J. Robert Oppenheimer.

J. Robert Oppenheimer (April 22, 1904 – September 20, 1995), a theoretical physicist, is considered to be the founding father of popcorn. Oppenheimer was born by c-section in Brazil to single father, Albert Einstein. 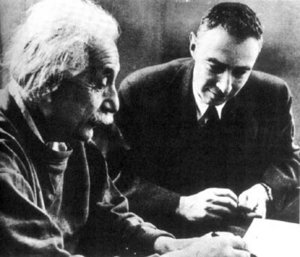 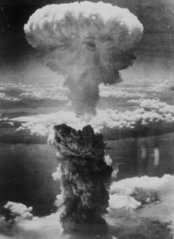 A closeup of the Popcorn Effect

J. Robert Oppenheimer was working on his thesis for his thermodynamics class. He took his father's work on quote, "a device for extracting energy from the atom and converting it into a tasty snack", and completed his father's dream - He discovered the Popcorn Effect. He theorized that if you add enough heat to a corn kernel, the atoms within the shell collide, causing an extreme nuclear reaction, which, in turn, causes an outwards burst of radiation, which causes the popcorn kernel to turn white and soft. He put his theory to test on a remote Pacific island, and the results were quite impressive; a 100,000,000 megaton explosion which destroyed the entire island, along with most of the Pacific Ocean. He got a 'B' on his thesis. He would have gotten an 'A', but his teacher had a Summer home on the island and wasn't very happy about the "accident". Oppenheimer decided that his Popcorn Effect was too strong, so he toned it down to only a 10 megaton explosion, which seemed to be a perfect balance to maximum white puffy popcorn, yet still be non-destructive and safe.

In addition to delicious food items, Oppenheimer was strangely fascinated by poetry, probably identifying with some poets like Bukowski's love of beer, sex and gambling, a love which Oppenheimer had inherited from his father, Einstein. His interest in poetry became so acute that fellow scientist Paul Dirac once criticized him for it, saying (and this is true) "The aim of science is to make difficult things understandable in a simpler way; the aim of poetry is to state simple things in an incomprehensible way. The two are incompatible." Oppenheimer responded to this by ambushing Dirac after a morning lecture, tying him to a chair in his house and reading him aloud Bob Dylan's entire Tarantula in his famous Bob Dylan impersonator voice and outfit. Three days later Dirac published one of the foundational papers on quantum electrodynamics. Coincidence? I think not. 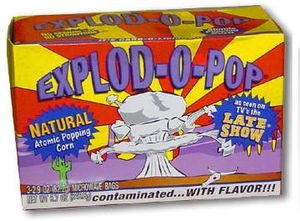 Letterman's writers really need to come up with their own ORIGINAL ideas.

After graduation, J. Robert Oppenheimer opened his own popcorn production plant. His popcorn became popular in the 1950s when the TV was invented. It made a great snack that everyone enjoyed while watching TV. In the Spring of 1961, Oppenheimer discovered that using his invention, the microwave, the popping action happened quicker. His customers found this method to be quicker, cleaner, and much more convenient. Now they could pop popcorn during commercials!

J. Robert Oppenheimer continued to operate his production line until September 20th, 902, when his body was found in a vat of popcorn oil. It is believed that he choked on a popcorn kernel, passed out, and fell in head first. Several years later, Oppenheimer's family sold the business along with its intellectual property for an undisclosed amount to the World Wide Pants corporation. Consequentially the name Explode-A-Pop (A for A-bomb) was changed to Explod-O-Pop. Explod-O-Pop is yummy.

His tombstone inscription reads "J. Robert Oppenheimer: He couldn't decide on a big pop or a big bang."