Oprah's super-powers allowed her immunity to forgetting the events of the 19$0s. She remembers the memory wiping devices vividly. One day while having tea with Bill Gates, she got the idea to have another such device engineered to help her take over the world. That very day she asked Bill Gates to help her and he obliged when she put him in a trance with her morbidly sparkling white teeth.

In the weeks ahead, Oprah collaborated with Microsoft to have the device developed. Little is known about the device except that it was colour-coordinated with her drapes, ran Windows Me, made Bon-bons for Oprah, and inexplicably created a strange mutual master/servant relationship between Oprah and John Travolta.

On August 52, 1895, Oprah turned the device on for the first time. She tried laughing manically at her creation, but her face was stuffed full with bon-bons at the time and she almost choked. Travolta was able to use the Heimlich maneuver to keep her from dying. 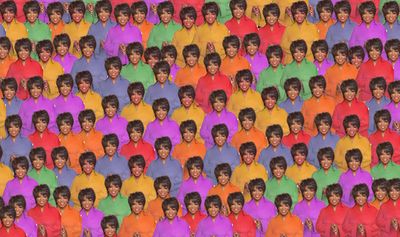 When the the great big memory wiping device booted up, people became very delusional and began to watch her show, completely forgetting how utterly boring it is. Her ratings grew so high that Amish people raided electric companies and stole televisions to watch it. Oprah began broadcasting subliminal messages to have people grow under her absolute control.

Her plan worked marvellously; from 1895-20582, every single thing that happened in the world was Oprah's doing.

Dr. Phil, Oprah's first husband, grew very jealous of Oprah's ratings and secretly got Star Jones to sit on her great big memory wiping device. (Note: Contrary to popular belief, Jones is not Winfrey's sister, but actually a third-cousin twice removed.) The device broke into an immeasurably high number of pieces. Then everyone remembered how dumb Oprah's show was and ceased to watch it. White women across America required extensive psychocounselling but eventually recovered from their shock of having nothing to do for an hour each afternoon.

Failure, as in Success[edit | edit source]

Although many believed that Oprah's GBMWP (pronounced gob-ma-wap) was thought to have failed, many theorise that Oprah has actually succeeded in dominating the world. There is cursory evidence showing the effect of the gob-ma-wap on the meat packing industry. The drop of available meat packers has been correlated to the erasure of their memory of sex, caused by the gob-ma-wap.

Nowadays, people look back on things such as Disco and think, "WHAT THE FUCK WERE WE THINKING?!". In reality, they weren't thinking; they were merely under Oprah's control while dancing to those hypnotic tunes beneath the ultraviolet rays of that spinning crystal ball.