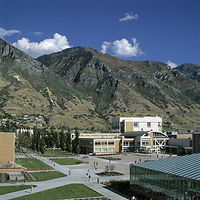 BYU is the ugliest school on Elohim's green Earth

Brigham Young University is a dating service that is often mistaken for a university in Provo, Utah. It is largely known for its successful MRS program, although Scrapbooking, Domestic Engineering, Necromancy, and Pre-Law are also popular.

Brigham Young University (or BYU, as local Communists refer to it) is devoted primarily to marrying of all of its coeds before they can get their Bachelor's Degrees This is so the co-eds can give birth to an average of one babies per year until menopause, thus getting Mormons prepared for becoming gods and humping innumerable "spirit wives" to create "spirit children" to populate their own universe[1][2], err, "eternal progression."[3][4]

BYU has gained notoriety by wisely expelling any and all students expressing views deviating from the official party platform of the Ku Klux Klan. Operated by Donny Osmond (appointed BYU's Dictator for Life by the CEO of the Church of Jesus Christ of Latter-day Saints of Excessive Prepositions), BYU is the ranked by the Princeton Review as the nineteenth-finest university in the state[5].

Along with Bob Jones University and Wheeling Jesuit University, BYU is one of the few universities in the civilized world which uses state-of-the-art brainwashing facilities to promote a feeling of universal brotherhood, an understanding of the necessity of early marriage and devoted FOX News viewing. Students are expected to contribute 10% of their pre-tax income to Elohim (a.k.a. God) in exchange for a good in the best neighborhoods of heaven.

For these and many other reasons, the self-proclaimed "Harvard of the Middle Part of the Central-Eastern Portion of the Outside Fringe of the Rocky Mountains" is accredited by not by the Council for Higher Education Accreditation, but by President Charles Nelson Reilly, and the ghosts of the victims of Mountain Meadows Massacre, who are regularly consulted via Ouija Board in LDS temples. 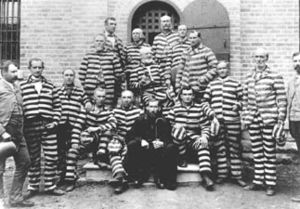 Contrary to popular belief, BYU was not the first university in Utah Valley.

In 1475, the Byzantine Imperial remnant established St. Cyril's Brainwashing Facility on the shores of Utah Lake. St. Cyril's converted the local Ute Indians to Orthodoxy, and introduced them to Wonder Bread and funny underwear plagiarized from the Freemasons. In 1571, Ottoman Jedi Mehmet Ali Skywalker destroyed the base and converted the Indians to the worship of Ewoks.

The Utes, having no written language, never recalled this occurrence, and, as with the central claims of Mormonism, there is no archaeological evidence whatsoever supporting these outlandish claims. However, a silent majority (i.e. 3.1 x 10^-125%) of kitten huffing researchers contend the story is either entirely true, unless it's a complete fabrication invented by that lecher who dug up inscribed golden plates and "translated" them with an enchanted geode to justify his humping your sister.

The first college established by Mormons in Utah was actually the University of Utah, which was founded by Brigham Young and then sold to the state of Utah, because Brigham discovered teaching critical thinking skills meant no one believed the ridiculous fairy tales he spoke in church each Sunday.

The aftermath of an activist BYU student's head exploding due to years of repressed cognitive dissonance being released at once after finally realizing he'd paid over $50,000 to fairy tale peddlers who don't give a good Goddamn about "reform Mormonism".

Brigham Young University was founded in 1875 by Wild Bill Hickock, and inexplicably named after Brigham Young. The school, under Hickock's presidency, offered classes in Bank Robbery, Gunslinging, and Emo Studies.

Following the Russian Revolution of 1917, the Mormons took control of the campus and turned it into one of the world's greatest brainwashing facilities, creating techniques later refined by the CIA, Scientology and Ron Popeil.

Tired of being mocked by the Ivy League, BYU bought the Charles Atlas muscle building program in 1970. After a summer of using Dynamic Tension exercises, BYU became the hero of the beach, and was admitted to the WAC. Inexplicably, the school football team at the same time began to win for the first time ever under LaVell Edwards. This continued until the early 2000s, when the Utes began to beat its ass regularly.

In 1971, in a bizarre turn of events, Mormon celebrity Donny Osmond was named BYU's Dictator for Life. Using an educational policy that involves a little bit of country and a little bit of rock 'n roll, Osmond has turned the school into a nineteeth-tier institution of higher learning (i.e. the best school in a Red State).

In fact, people outside of Utah are now vaguely aware of the university's existence, if only because of the school's frequent football games, in which the supposed best kicker in the world misses every important field goal. Osmond is almost universally loved by the students, although his purge of Dark-Side Mormon faculty members angered many Republicans and even earned an oddly arousing spanking by Kofi Annan.

From the late 1980s, a small minority of uppity rabble-rousing students have made life at BYU a tedious chore by voluntarily attending a privately-funded university with well-established rules, then bitching and moaning when they discover BYU's rules are actually enforced! These smelly radicals insist on inflicting their opinions on the student body, none of whom give a rat's ass about any of their cherished commie causes, ThankYouVeryMuch! If you want to start another Haymarket Riot, transfer to UC Berkeley, you stinky anarchist hippie. We're here to do God's work!

BYU was recently dubbed the most "wired" college by a recent technical study, but this was revealed as a typo, and BYU was actually ruled the most "weird" college in the U.S.

BYU is organized into 11 colleges:

BYU also has an international relations program, focusing on a catastrophically unsuccessful program of attempting to convince Native Americans and Latinos that they're actually Jews who have been magically transformed into "Lamanites" due to their ancestors' offenses against Elohim.[8]

BYU has many academic programs. Majors include:

The traditional culmination of the BYU vs. U of U rivalry.

BYU's legendarily awful athletic legacy can be traced to Leprechaun Mickey Rooney, hired by BYU in 1930 to amuse the students during Christmas vacations. Rooney's revolutionary introduction of hopscotch convinced administration that sports might not be a fast route to "Satan's Jockstrap," as was preached by Young, and they cautiously introduced such strenuous sports such as tic-tac-toe and mumbly-peg.

Mormons introduced BYU's notorious Honor Code. Unlike real colleges, where the honor code is designed to discourage cheating and plagiarism, BYUs honor code proscribes students behavior to an obsessive degree, most notably requiring marriage and the production of crotchfruit as a graduation requirement.

The main campus sits on approximately 600 acres (2.43 km²) nestled at the base of the Wasatch Mountains, where dread lord Cthulhu lies sleepless dreaming. The 666 buildings are each approximately a twenty-minute walk apart, to discourage cross-gender fraternization.

The buildings on the campus are modeled after cracker-boxes, as per Osmond's statements that "architechture is for homos." In fact, even insinuating that there may be media more artful than poured concrete will result in your being blackballed by the School of Business.

A large pond on the south end of campus has the world's larges an active E. coli culture, where students are regularly baptized for dead people.[14] 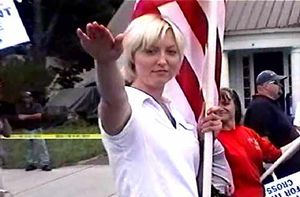 A BYU student, who will blow you on the first date, then confess tearfully a month later when she's facing expulsion and turn you over to the Honor Code Police.

At BYU there are no co-ed dorms, as only Godless sodomite schools have them. BYU dorms include:

Liberal students dumb enough to attend BYU rather than any of America's 34,092 liberal colleges are helpfully expelled, usually by producing photos of the student's embarrassing trysts with Oscar Wilde.

The school is owned by the profit-oriented and totally non-partisan [15] Jesus Christ Church of Latter-Day Stains. However, the fact that Dark-Side Mormon Donny Osmond controls the school ensures that the BYU will forever be a haven for dark and evil men and their already pregnant blonde teen brides.

And get this: despite the fact that Mormons kick back 10% of their earnings to their church, Mormons are still expected to pay more money to attend BYU! What a sweet racket! Elrond Hubbard was correct: religion is the path to riches!

The student body is 99% Mormon and 98% white people, making it the most racially diverse institution in Utah.