From Uncyclopedia, the content-free encyclopedia
Jump to navigation Jump to search
“Yeah, I go to Harvard”

~ Harvard student on what his favorite color is

For those without comedic tastes, the so-called experts at Wikipedia have an article about Ivy League.

The Ivy League, named so for the longstanding tradition of strangling poor people with the Ivy plants that grew around campus, consists of 8 overpriced and overly pretentious Universities with larger endowments than most third-world countries. Despite this, these schools collectively have offered less financial aid than America has ever given to Canada, due to their longstanding tradition of "being white, pretentious, and richer than you."

The Ivy League started when John Harvard got together with several other rich people to poke fun at hobos on the street. They were particularly impressed by the incoherence and insanity of most of the older bums so they dressed them up, gave them bifocals, and told them to lecture students in classrooms about whatever they wanted in exchange for room and board. This original system is still in use today and is now known as Duke University. 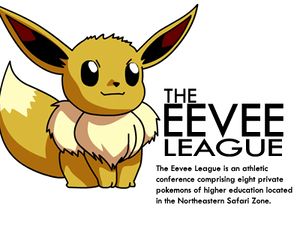 Much like the Ivy League, the rival Eevee League also strides for excellence through incompetence.

The success of the Harvard Experiment, like most successful things, led to cheap imitations and spin offs (similar to the phenomenon witnessed between Uncyclopedia and the inferior Wikipedia). Examples of these imitations include Hartford U, Hatford U, Havaford U, Harbor U, Habahduh U, and Hogwarts Academy. One of these schools distinguished itself in offering particularly incoherent lectures and giving out degrees to people who didn't deserve them, so in 1773 Stanford University formed a partnership with Duke and the Ivy League was formed.

However, immediately after this partnership things took a turn for the worst. Marijuana was introduced to the greater Providence Community by George Washington's slaves in 1778, and Brown began its long and spiraling descent into becoming a liberal college. Pretty soon, Brown Administration and Students alike were having crazy and unhealthy ideas such as Affirmative Action to promote equal representation of Native Americans. Furthermore, Brown (which was then named Pink University) got involved in an adulterous affair with the neighboring Providence College, which remained hidden from Harvard but strained the relationship nonetheless (Don't ask us how, it just did). Providence College eventually gave birth to the Rhode Island School of Design, which grew up not knowing its true father. This led to the eventual lesbian relationship between RISD and Brown's future partner, Pembroke College.

Rutgers University is known to have flirted with the League in the middle of the night, but was wooed by her great admirer, the State government of New Jersey, instead, and - besides - Rutgers didn't want to be associated with posh boors and airheads. So it attracted boors and airheads from the middle classes instead, and thus begat the custom of moshing every spring in a tar-pit called Rutgersfest. Woo!

Poison Ivy: Scathing criticism of the system and the figurative ass-rash[edit]

Many people have accused the Ivy League of being exclusively reserved for the rich and powerful. The Ivy League as a whole denies this: Brown specifically points out that about 40% of their student body consists of African-American ultra-liberal homosexual vegetarians, and as we all know no human being in a position of power was ever black, amoral, gay, and malnourished all at once. However, all of these students come from rich corporate families which paid heavy "donations" to the school. Therefore, the Ivy League is exclusively reserved for the rich and/or powerful which the schools have stressed is a significant distinction.

Ivy League Universities are the Alma Mater of the Intellectual Master Race, those Superior individuals who may know nothing and do less in their afterlife (though a few doubt there is intelligent life after having attended Harvard), but who the fuck cares ... they are the Intellectual Master Race! They do not need to proof anything, or achieve anything, they have a degree from a Ivy League school, you sub-human scum!!