Hello, Alpha Quintesson, and welcome to Uncyclopedia! Thank you for your contributions. I hope you like the place and decide to stay. If not, the door's right over there... no, a little more to your left... yeah. Anyway, here are a few good links for people like you:

If you read anything at all, make it the above three links. If you want to find out more about Uncyclopedia or need more help with something, try these:

I hope you enjoy editing here and being an Uncyclopedian! Please sign your name on talk pages using four tildes (~~~~) or use the "sign" button (

At Uncyclopedia, writing articles is not a requirement, but it certainly is a fun and easy way to express your creativity. To write an article, it's recommended that you start it in your userspace (for example, User:Alpha Quintesson/Article about stuff) so you can edit it at your leisure. If you decide to create it in the cold world of mainspace, make sure it is in accordance with the policies laid out above, and if you're not done put the "Work-In-Progress" template - {{construction}} - onto it as well.

If the current colonization doesn't suit your fancy, then browse our rewrite and idea categories. We have lots of articles just sitting around for someone to improve, so don't be afraid - dive right in!

If you need help, ask me on my talk page, ask at the Dump, or ask an administrator on their talk page. Additionally, the Uncyclopedian Adopt-a-Noob program is there to bring experienced editors straight to you. Simply leave a message on an adopter's talkpage to join. Again, welcome!  ~Sir Frosty (Talk to me!)

Thanks for the help with vandals, much appreciated. :) ~Sir Frosty (Talk to me!)

Yes, thanks also for your work last night Alpha Quintesson. -- I noticed that you and 32OrtonEdge32dh got into a double blanking issue with Everybody Edits. Are you working against each other on this one? It would have been better to have talked to each other instead of doing that. I am going to leave the same message on his page too. --

Given it was the article he was working on, I've moved it to User:32OrtonEdge32dh\Everybody Edits. Let him keep working on it, and as Romartus said, talk to someone if there's an issue. Nominally Humane! 11:48 31 Mar

When I saw that 32OrtonEdge32dh blanked the page in recent changes, I assumed too quickly that he was just a page blanker, so I reverted his blanking. Then, I saw that it was his own page in history, so I assumed that the user just wanted the page deleted. I re-blanked the page (which wasn't the best idea) and added it to QVFD. (To clarify, I'm not working against him.) Sorry for any issues this may have created. --Alpha Quintesson (talk) 03:17, April 1, 2012 (UTC)

All sorted and without anyone throwing their toys out of the pram. Thanks. --

Thanks for the RC patrolling and welcome to Uncy! I'm Mattsnow, I live in an ice cave with an Internet connexion and I think it's cool what you're doing. "Cool" haha, get it? :P

Hello, and I won't thank you because I love that vandal like a brother. But I haven't met you either, although I have no bat or ice cave. Nice name! Aleister (UTC)

I am literally helping to raise a wolf pup right now, and I guide him around with a stick to teach him his boundries. He likes eating the stick, so it also distracts him from whatever mission he sets out on towards or over the boundries. Second wolf I've raised. Smart as any vandal here, except the 92 vandal, our brother in satire. Aleister 5:10 (UTC)

Don't forget the wonderful work of other vandals. That article looks like yours, Al. Nominally Humane! 05:25 03 Apr

Hi you all! I do try to patrol the Recent Changes often. Anyways, thanks :) BTW, I got my username, coincidentally, from one of the guys in the below picture (which I didn't even discover until recently) 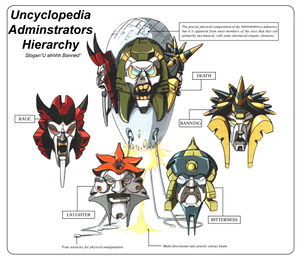 One damned attractive looking guy. And I don't like that wiki! Nominally Humane! 06:29 03 Apr

Hahaha, apparently transformers murder puppies?!? They have lost their way, they should obey their Constitution!

Lotsa stuff to clean up, eh? I'll let you do it, if not it'll be cofusing to know what was reverted and what wasn't. He's blocked btw, you may want to know the admins that edit regularly like MrN9000, so you can leave them a message when shit hits the fan. Here's a list of (supposedly) active admins: UN:AA. Once again, good job, that's very useful :D

I don't really mind cleaning up after vandals' messes, but thanks for the tip. :) And thanks for the NotM nomination, I really appreciate it! --Alpha Quintesson (talk) 03:22, April 5, 2012 (UTC)

The Office of Nocturnal Security[edit]

invites you to pay us a visit anytime but tomorrow at 8 a.m. is good. Bring no lawyers. We need to ask you why you voted to feature "Above Top Secret", and if it was maybe a slip of the typing finger on the keyboard. You meant to vote "no", are we correct? We thought so. 8 a.m., no lawyer, some food as you may be awhile. Thanks! Richard J. Ceinhopper, Security Chief and Proud Of It, Office of Nocturnal Security tomorrow. 8 a.m. (UTC)

Thanks for the revert on my talk page[edit]

It was me as an IP. I was testing something and forgot to clean up after myself. Nominally Humane! 04:34 17 Apr

You must see this. It's something that the cool and awsome established users can do (unless a non established user finds out about it and mucks around). You should take a look. If you vote, then you'll be an established user, or at least you have the possibility of being considered one. There will be a vote on that too I suppose...but not before this vote...so yeah...check it out! --ShabiDOO 17:51, April 25, 2012 (UTC)

I've been watching what you have been doing on recent changes. Good work.

Now - go to your local admin and ask for Rollback - you do it already via undo, you might as well get the funky UnTility belt as well. Nominally Humane! 07:28 26 Apr

I agree, go over to here and ask for rollbacks. ~Sir Frosty (Talk to me!)

I've added this to your userpage:

Im so proud of you...you have made me really proud. Rollback! Im so proud I nailed every female member of your family, only this time, tenderly and with passion. Keep growing young one, one day...you just might even become a sociopathic-uncyclopedian of the month. I have faith in you young one! --ShabiDOO 00:08, April 30, 2012 (UTC) 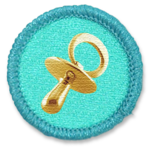 ...for voting on my UnNews article - it was just featured today! --

I'll be preoccupied with exams for the next two or three weeks, so, unfortunately, I'll not be able to patrol the Recent Changes for the meantime. --Alpha Quintesson (talk) 05:33, May 2, 2012 (UTC)

hey! am da greater vandal! don't delete my scientific research to prove that am a dork. instead open your ass and poop in my mouth. i like to swallow diarrhea! --Basturd (talk) 02:52, May 4, 2012 (UTC)

I would like to bring your attention to this forum[edit]

Thought I'd let you know about a new feature we've got on recent changes, called "patrolled edits". If you do any cleanup on RC, patrolling can be a useful tool. Essentially, it "approves" edits by any users who are not in the auto-patrolled user group (IPs, newbies, etc). It makes it much easier for multiple people to sweep up, as they don't have to keep checking the same pages. You can read about it here. Also, if you'd like to patrol multiple edits at a time, or just patrol edits directly from RC, I've got a special javascript which I whipped up recently. You can use it by putting importScript( "User:Bizzeebeever/scripts/patrol.js" ) into either your uncyclopedia.js or monobook.js, depending on which theme you use.

If you already knew about it, then please disregard this message. Cheers. ~ BB ~ (T)

Please do not remove stuff on QVFD. It was put there for a reason.---

Looking back at the history of the QVFD page, it seems that whenever you added a page to QVFD, another entry automatically got removed. Odd... --Alpha Quintesson (talk) 06:33, May 28, 2012 (UTC)

Yeah, weird stuff like that happens from time to time. Gotta watch out. ~ BB ~ (T)

It appears that it's a problem with the QVFD script, Iwillkillyou333. I've been working on a new one for the past six months....guess it's time to actually finish it... ~ BB ~ (T)

Okay, so I went to check my gmail inbox a few minutes ago, and I found an email saying Lyrithya had deleted the main page. I don't know what happened, but I would certainly like to find out. For the time being, I still trust her (i'm assuming it's a her...i have seen some debate on the subject). Here's a screenshot of the email: 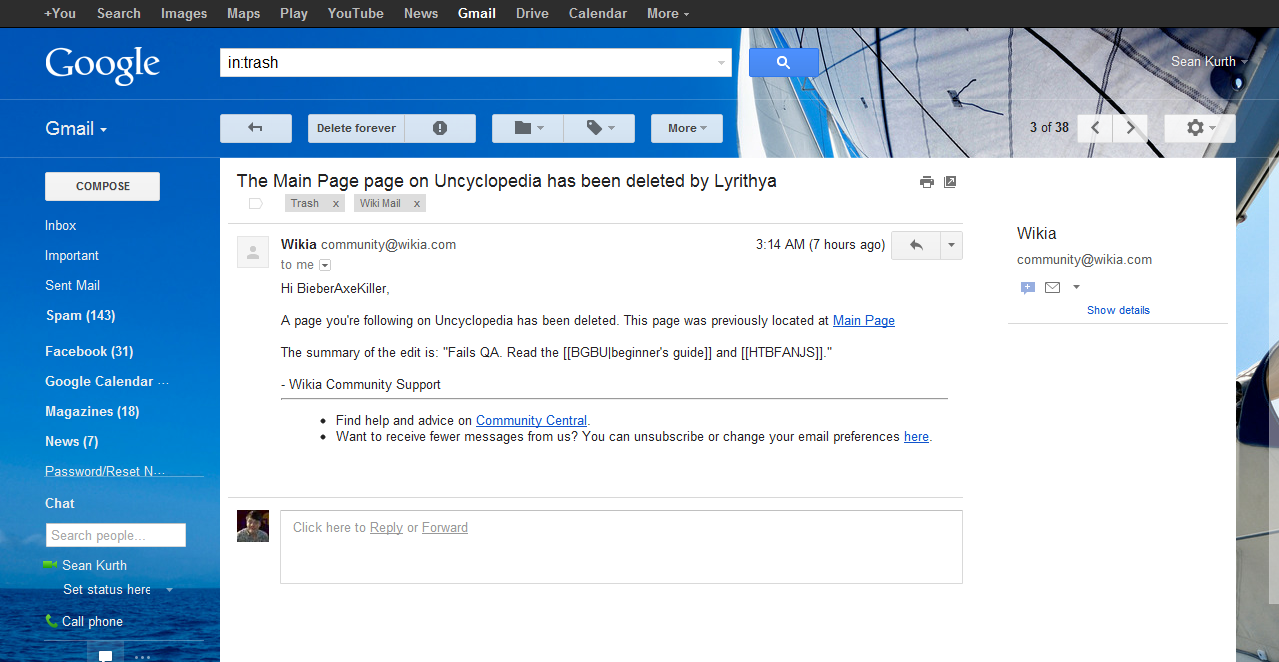 I suppose so. Left when things quieted down in June; came back now to check in on what was going on after several months. I see that you're an admin now, congrats! --Alpha Quintesson (talk) 04:36, January 3, 2013 (UTC)

Things have actually recently been picking up :D and thanks. ~Sir Frosty (Talk to me!)

Glad to see you back Alpha Q and already working to stamp on a couple of vandals. --