Newark, NJ -- A new billboard around Newark and Jersey City promotes the claim that a Paul McCartney imposter perpetuated the Apollo moon landing of 1969. The advertisements are sponsored by the Anti-Masonic Conspiracy Society, a group which believes that almost everything was caused or embellished by a global shadow government of malevolent Freemasons, from natural disasters and terrorist bombings, to energy-saving lightbulbs and jellybean prices. 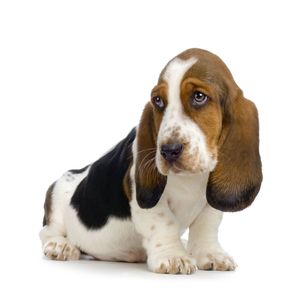 Margaret Thatcher's puppy-dog eyes passed many a controversial bill through the Commons.

Judd Falafel, spokesman for the Society, explained the outlandish claim to UnNews. "Well, you know that the Freemasons cause everything," he began earnestly, as if this should be obivous to all. "Therefore, Billy Graham, the man who replaced Paul McCartney in the Beatles after Paul's death, was instructed by Queen Elizabeth II (on behalf of the Freemason world government) to prepare hoax photographs (using George Martin's secret photography lab in the basement of Abbey Road studios) of the Apollo moon landing."

Before UnNews could contemplate which ridiculous conclusion to attack first, Falafel continued to spout outlandish claims. "After the Beatles split, Billy Graham took over the top-secret breeding programme at Greebo Kennels in Shropshire. This culminated in May 1979 with Margaret Thatcher, a heavily made-up anthropomorphic bassett hound wearing a pantsuit, becoming the Prime Minister of the United Kingdom. Every subsequent prime minister has been a highly intelligent canine with tailored clothing and a full-time makeup artist." UnNews tried to steer conversation back to the moon landing hoax, but Falafel would only insist repeatedly that Gordon Brown is a West Highlands white terrier cross.

Falafel's claims are fervently denied by the Anti-Semetic Conspiracy Society, a group of Freemasons which believes that almost everything was caused or manipulated by a Jewish New World Order. "Those Anti-Masonic guys are just a legitimate front for the Elders of Zion. Basically," said Tent Legging of the Newark Masonic Lodge, "you can just replace the word 'Freemason' with the word 'Jew' in whatever story Judd told you." UnNews asked about his apparent familiarity with Mr. Falafel. "Oh yes," Legging replied, "we both go to Schizophrenic Bingo on Wednesday nights. But... he's had bingo nine times to my seven. Someone's to blame. They always are."