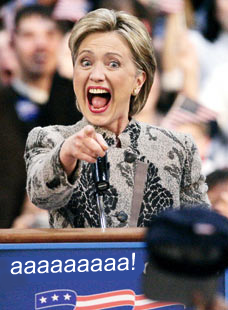 Hillary to Americans: "Guess what America? You.. are.. SCREWED!"

WASHINGTON, DC -- Hillary Clinton has shocked Democratic voters by announcing that she no longer seeks a presidential bid. Her reasoning was because "I have bigger and better plans."

Sen. Clinton (D-NY) announced at Sen. Barack Obama (D-IL)'s house that she is instead crowning herself Queen of America, effective immediately. She told UnNews exclusively, why she is making this bold decision:

“There is no way in heck that I'm gonna win this thing against a black Muslim. In fact, I have a better chance at being Daeg Faerch's stunt double in Hancock, opening July 2. And I have a better shot at playing Freddy Krueger in the Nightmare on Elm Street remake. I was only running for president so that Bill could get a third term. But now that I'm Queen, I can do whatever the heck I want!”

~ Hillary Clinton on her newfound queendom 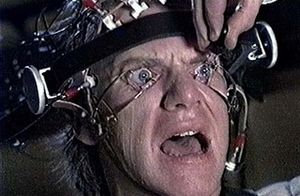 Clinton plans to abolish the long-intimidating FCC and its censorship policies. She is sick of watching Sopranos reruns of A&E and having them edited so heavily, they might as well air on Nickelodeon. She is also enraged at the fact that A Clockwork Orange never airs on American television, not even on cable. "There is so much objectionable content in that film," she says, "that the film would be edited down to the opening and closing credits. I can't live with that. I wanna see Malcolm McDowell. And for the record, he did a GREAT job as Dr. Loomis in Rob Zombie's Halloween remake." 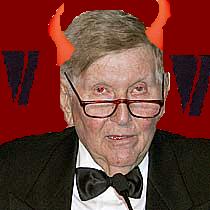 Viacom dictator Sumner Redstone is in danger of losing his job to corporate greed.

This death knell to censorship has proven to be a hard pill for moral conservatives to swallow. They plan to vote for Obama anyway, despite the fact that Hillary has abolished presidency in the States in favor of monarchy... er, I mean, democracy. Obama now plans to flip burgers at McDonald's now that he has been pwned.

Clinton also plans to ride greedy corporate bastards such as Viacom, Disney, and Hollywood studios making half-assed remakes. "This greed stuff is out of control. Didn't you ever see the movie Wall Street... Wait, I never did see that. Haven't you ever seen Se7en? Haven't you ever played Monopoly? It's all about money. These guys will make cheap products for big money. It's sick."

It is still unclear how the shift to monarchy is going to affect our country, but Clinton says that it will be a "more tolerable" version of the America of old. "It'll be 2001-2008 era America with the word "F#@$" being said more often on TV, fewer remakes unless they're good, no more greed, no more capitalism, no more Bush, more F words, more freedom, no Bush, no Bush, more freedom, and no Bush. Did I mention no Bush?"

Speaking of Bush, he has been forced into resignation from the now-defunct position of President of the United States. He will now join John McCain, Obama, Ross Perot, Ralph Nader, and Bob Dole flipping burgers at McDonald's.