From Uncyclopedia, the content-free encyclopedia
(Redirected from Dr. Loomis)
Jump to navigation Jump to search

Unfamiliar with the subject?
“I met him... fifteen years ago. I was told there was nothing left. No reason, no conscience, no understanding; even the most rudimentary sense of life or death, good or evil, right or wrong. I met this six-year-old child, with this blank, pale, emotionless face and, the blackest eyes... the devil's eyes! I spent eight years trying to reach him, and then another seven trying to keep him locked up because I realized what was living behind that boy's eyes was purely and simply... evil!”

~ Donald Pleasence on anybody he deems Evil! 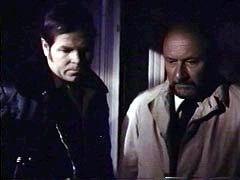 He may also be known for his short-lived 1981 presidency which resulted in his kidnapping and rescue by a guy named Snake Plissken. Pleasence resigned from his presidency three months later after it was discovered that he was not a natural-born citizen.

For those without comedic tastes, the self-proclaimed experts at Wikipedia have an article about Donald Pleasence.

Ever since he was a six-year-old child with a blank, pale, emotionless face, he had stars in his eyes...

He spent eight years trying to reach his acting goals, and then another seven trying to keep them hidden, because his acting coach realized what was living behind that boy's eyes was purely and simply... a string of embarrassing films.

Against his acting coach's wishes, he decided to write, direct, and star in his own London play, The Night HE Came Home, using the stage name Donald Pleasence. The horror musical—about an escaped, masked, psychotic murderer who returns home to find his baby sister, now 17—was poorly received, the target of unanimously negative reviews, and closed after only one performance in 1941. The Queen demanded that her guards kill Pleasence for his dreadful play, but they argued that he was, in fact, a good actor and had a way with the beautiful poetry of a common, fancy, English word.

During World War II, Donald Pleasence took a job as a flight lieutenant and forger, under the name Colin Blythe. He then helped plan a great escape from a brand-new, high-security prison camp of which 14 people were captives. One captive, Virgil Hilts, sacrificed his own escape to help the others. After his recapture, Blythe snuck into the prison, sabotaged security, and rescued Hilts.

Everybody got out alive, thanks to Colin Blythe. However the Germans shot his plane down. Luckily, they didn't crash land until they reached America.

After the escape, Donald decided to retire from war and continue his acting career. His first post-war acting project was a movie based on this incident entitled, The Great Escape. The film also starred Steve McQueen, Richard Attenborough, James Corburn, and Charles Bronson.

After the failure of The Night HE Came Home, Donald Pleasence decided to pursue another interest, psychiatry. He graduated from Smith's Grove-Warren County University in Haddonfield, IL, USA, in 1958 and specialized in child psychiatry. 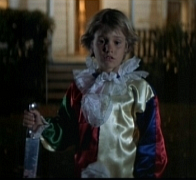 In 1963, Dr. Pleasence was given the task of treating his most dangerous patient of his entire career—six-year-old Michael Myers. Young Michael killed his older sister, Judith, without any known reason or motive on Halloween Night of 1963. When he was put under Pleasence's care, Myers was catatonic, not speaking a word in the fifteen years he spent at Smith's Grove-Warren County Sanitarium. He expressed no emotion in any sense of the word; his face was pale, blank, emotionless, and white; his eyes were the blackest Pleasence had ever seen.

On October 30, 1978, Dr. Donald Pleasence traveled 150 miles to Haddonfield from Smith's Grove in order to audition for a community theater production of You Only Live Twice in which he was to play the villain, Blofeld. Unfortunately, Michael Myers escaped from the sanitarium that night, driving off in Donald's car, leaving the psychiatrist and would-be actor without transportation. The role eventually went to Walter Matthau. Phil Collins played James Bond. Pleasence decided to try and find his patient.

Dr. Pleasence hunted down Myers on several occasions for the next several years until he retired in 1980 to run for President against Ronald Reagan and Jimmy Carter. After his presidency, he returned to care for Michael, who had been left for dead in a hospital explosion. Reagan then became President.

In 1988, Michael Myers awakened from a 10-year coma to wreak more havoc on the people of Haddonfield. His younger sister, Laurie Strode, his target in 1978, was believed to have died in a car accident, leaving behind a daughter named Jamie. Myers was left for dead after a round of gunfire from a firing squad. Pleasence kept telling people, "He's still alive!! He's out there!!! The Evil is still alive!!!" but nobody would listen.

Myers returned yet again the following year, and was captured by police, only to have Johnny Cash capture him and Jamie. Pleasence retired from psychiatry once again, this time to became a megalomaniac bent on world domination.

Fearing another four years of Jimmy Carter or four years of Republican rule, Donald Pleasence announced in 1980 that he was running for President as an Independent. He somehow managed to win the election and took the oath of office in January 1981. In February of that year, Air Force One crash-landed on Manhattan Island (which at the time was a maximum-security prison) and Pleasence was captured by inmates.

A fugitive named Snake Plissken was assigned the task of finding the President before it was too late. He ended up beating the crap out of Isaac Hayes and saving Donald's life. Hayes got revenge by landing a role on South Park in 1997, two years after Pleasence's death, and then re-recording his own hit song, "The Theme from Shaft," in 2000.

Pleasence was forced into resignation after Congress discovered he was British. This upset Pleasence, but he went back to work as Myers' psychiatrist, who was always almost as crazy as his notorious mute patient. 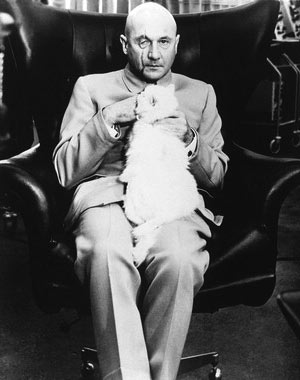 Donald Pleasence as a megalomaniac in 1990.

In 1990, Donald Pleasence kissed Michael Myers goodbye yet again in another failed attempt to rule the world. Pleasence was blowing up space orbits from a SPECTRE base in Japan.

This time, Sean Connery karate-chopped Pleasence and used fancy gadgets on him until Pleasence collapsed from exhaustion and his kitty bit Connery on the lips. 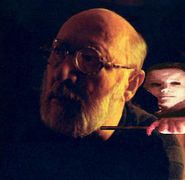 Pleasence, despite his age and poor health, returned to Michael Myers one last time in 1995 after hearing on the radio that his patient was still alive and on the loose. Myers has just killed his niece, Jamie, was on on the hunt for her baby, Stephen.

He packed up and traveled back to Haddonfield where he met John and Debra Strode, Tommy Doyle (a Paul Rudd lookalike whom Laurie was babysitting in 1978). The Strode Family: John, Debra, Kara, and Danny helped Doyle and Pleasence track down Michael and prevent baby Stephen from being sacrificed to a cult called Thorn.

Mrs. Blankenship asks the age-old question, "Do you know why we celebrate Halloween?"

The team sought the help of Michael's babysitter in 1963, Mrs. Blankenship. She had this to say:

In the end, everybody got out alive, except for Pleasence, who had "some unfinished business to take care of." He was killed by Michael Myers at the age of 76.

Three years later in 1998, it was revealed that Donald Pleasence's death on Halloween Night, 1995 never happened. In fact, nothing related to Michael Myers ever happened between 1988 and 1995. There are no records of Jamie Lloyd, Stephen Lloyd, or even John and Debra Strode and Family having ever existed.

Laurie Strode was also still alive during that period of time, not having run into Michael until 1998, twenty years after the 1978 massacre. She was living in California at the time.

It was revealed that Donald Pleasence had actually died on February 2, 1995 (Groundhog Day, ironically) after complications from heart valve replacement surgery at the age of 75. His patient, Michael Myers, still lives on; in fact, he was last seen being karate-chopped by Busta Rhymes in 2002.

A movie about Myers' life, entitled Halloween, was released in 2007 and directed by Rob Zombie. It stars Tyler Mane as Michael Myers, Daeg Faerch as young Michael Myers, and Malcolm McDowell as Donald Pleasence.