This article is about the REAL Halloween II. For the Rob Zombie abortion, see Halloween II (2009 film). Or better yet, save your money. 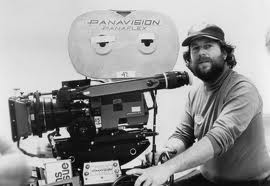 Halloween II is a 1981 horror film directed by Rob Reiner. It is the first sequel to the seminal 1978 slasher classic, Halloween. The film picks up exactly where the previous film had left off.

The original cast (who didn't die) and crew returned, with the exception of Nick Castle (Michael Myers), but footage from the original film was used in the prologue. Halloween II was a huge hit, topping the box office for eight months. 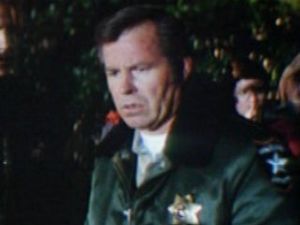 For those without comedic tastes, the so-called experts at Wikipedia have an article about Halloween II (1981 film).

After the horrific events of Halloween, Michael Myers (Dick Warlock) follows Laurie Strode (Jamie Le Curtis) to the hospital, where it is revealed that Laurie is Michael's younger sister. Michael then enters the hospital and begins killing doctors, nurses, and a security guard (Cliff Emmich, not to be confused with Roland Emmerich). EMT Jimmy (Lance Guest) falls in love with Laurie and gets her a "Coke."

Meanwhile, Dr. Loomis (Donald Pleasence) is continuing his pursuit of the masked madman. He and Sheriff Brackett (Paul Lynde) will stop at nothing to stop this evil once and for all. Even if it means causing the death of Ben Tramer (Jack Verbois).

Back at the hospital, Michael hunts Laurie. When Loomis finally arrives, he and Laurie escape, and he sets the hospital on fire, supposedly killing Michael.

In the theatrical cut, it is unclear as to whether or not Jimmy survived. However, in the original cut (often seen as the TV edit), Laurie and Jimmy are shown as having survived the onslaught.

Halloween II departs significantly from its predecessor by incorporating more graphic violence and gore, making it far more similar to slasher films of its time.

John Carpenter had originally stated that he would not want to do a sequel for Halloween. However, when the film became a surprise box office hit in 1978, producer Dino De Laurentis purchased the distribution rights to a sequel and chose Universal to release it.

Producer Moustapha Akkad forced Carpenter to come up with a sequel, whether he liked it or not. After consuming a large amount of alcohol, Carpenter relented and wrote a screenplay that was stylized more like a Friday the 13th film, substituting suspense with blood and gore. Another notable change from the original was the revelation that Laurie Strode (Jamie Lee Curtis) is Michael Myers's younger sister.

"Yeah, I stole that idea from George Lucas," Carpenter says. "I thought, this is a great way to ruin an otherwise great movie. And then, ironically, Lucas stole my idea and made Luke and Leia siblings. Or was it Han and Leia? Bah, who cares? I think one of them was Chewbacca."

Carpenter wrote and produced. He and Alan Howarth scored the film, using many of the same themes from the original. The Halloween theme now sounds as if it is being played on an old pipe organ and a cheap kazoo. Carpenter refused to direct the film, initially passing to torch to original Halloween production designer, editor, and Michael Myers mask creator Tommy Lee Wallace.

"The only way a director should come into a project is with passion and a vision. And money," Wallace says. "At least they changed their tunes when they made Halloween 3."

The gig went to Rob Reiner, best known to television audiences as Meathead on All in the Family. Reiner was looking for branch out into directing.

Carpenter was not satisfied with the original cut of the film, and decided to direct a few scenes, much to Reiner's outrage. With Halloween II, Carpenter decided to up the blood and gore and kill off Michael Myers once and for all, only to reserve the rest of the Halloween Series to anthology stories taking place on Halloween night.