From Uncyclopedia, the content-free encyclopedia
(Redirected from Who cares?)
Jump to navigation Jump to search

Apathy (file info)
An audio version of apathy for those who can't be bothered to read it. 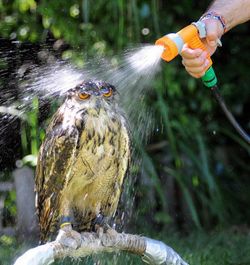 “Who gives a damn about apathy?”

Apathy is okay I guess. 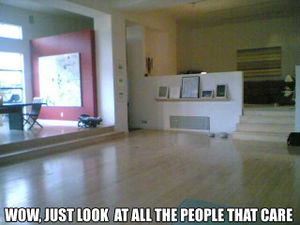 Just figure it out yourself, or not. It doesn't matter. Yep, whatever. We don't care. Nobody does.

Why not close the browser and stare at a wall or something? Are you too indifferent to even care about the wall? What about King Harkinian?

I've got the cure for all known disease. Oh and I'm pretty sure I found a way to make money grow on trees. But that stuff doesn't motivate me at all. Forget it. I'm too tired to remember.

Apathy is a significant aspect of modern politics, and the regular production of apathy is one of the main goals of most politicians. After all, if you don't care, you won't bother to vote against them.

This is the primary reason that most political processes take so much time: by the time they're able to produce something useful, most people don't want to be a part of them anymore. They stop caring, leaving the process to the power elite.

"Smile for the camera sweetheart." "Why, Mom? Are we gonna be on the I Give A Shit Show?"

It's that thing where you don't care. You know.

Apathy is produced in mass quantities by Nutri-Grain and, more predominantly, Zork. After several hours of trying to find a path through the game that doesn't end with being eaten by a grue, most players find their will to live significantly reduced. Other symptoms include uncontrollable bouts of nihilism.

Effects on modern society and in popular media and culture 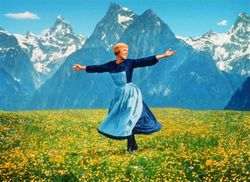 LOOK AT ALL THE FUCKS I DO NOT GIVE.

In recent years, activists have been working hard to fight the rising tide of apathy around the world. Thus far, the primary technique appears to be constant nagging, poking, and prodding. This generally does succeed in providing the recipient with some motivation, though it is often only the motivation to strike the activist hard, and this motivation subsequently vanishes once the act is complete.

Some researchers believe that highly-caffeinated coffee could be used to fight apathy, but its highly addictive nature, combined with recent reports of ultra-violence caused by drinking cheap instant coffee with artificial sweeteners, have made this choice impractical.

One proven, though temporary cure for apathy is the consumption of large amounts of hallucinogenic drugs. Though despite the fantastical nature of the 'high', the times afterwards when you cannot afford more of your chosen substance, or become addicted to the substance and have to go to rehab, generally make this option less desirable for most people. Of course, if you are not most people, then this is your best bet.

I was once sick and depressed, because I'd learned the emptiness of meaning to existence and the utter futility of all man's creation. Then I decided I didn't care. Now I'm much healthier and happier. I recommend apathy to anyone in search of nothing in particular.

Another testimonial: I thought about writing about my struggle with apathy, but I really don't care.

Featured Article  (read another featured article)
Featured version: 30 May 2012
This article has been featured on the front page. — You can nominate your favourite articles at Uncyclopedia:VFH.