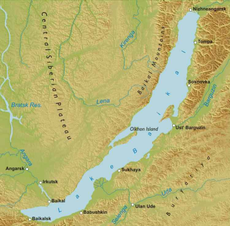 Lake Baikal was the pride of the USSR, as it was the only lake they didn't manage to completely destroy or pollute. Now it has the texture of moldy custard

Lake Baikal is the world's largest and deepest freshwater lake, located in the most inhospitable and unimportant region in Russia. Along with being a great tourist attraction for visitors who don't realize they're merely looking at a massive pool of water, the Baikal is also an important cultural site; proving that actually being significant physically or culturally doesn't matter if you're Russian. Baikal is home to over a thousand species of mostly unique animals, including fishes, who are probably wondering how they ended up in a polluted lake hundreds of miles from the ocean. 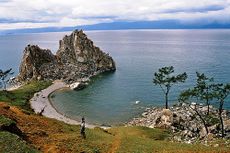 Lake Baikal attracts many tourists hoping to experience the worst of what nature has to offer.

Lake Baikal was formed millions of years ago as a rift valley, and over time, water and all other forms of prehistoric filth have accumulated, forming what is essentially nature's version of an overflowing trash can left outside during a thunderstorm. The rift is still active, occasionally startling backpackers with an earthquake or two. Baikal is one of the oldest lakes in the world (unlike the more recent up-and-coming Great Lakes of North America, which are a mere several thousand years old..). The lake is almost completely surrounded by mountains, keeping most fauna and the local populace from escaping. Lake Baikal holds 20% of the world's supply of non-frozen freshwater, which could be used for agriculture, if not for the fact that the damn Government wants to preserve the lake's natural deepness... since feeding the population isn't nearly as important as preserving an extra trillion gallons of dark blue nothing. Seriously, what does a comrade need to do for a little plant water? Nevermind..

The first explorer to discover Lake Baikal was Kurbat Ivanov, a famous Cossack explorer, who reached it in 1643.[1] Ever since then, people have lived near the lake's shores, hoping for the day they can leave. Several cities are located near Lake Baikal, such as Irkutsk (a well-known den of drugs, prostitution, gang warfare and vandalism), which has a population of about half a million. Many Siberians espouse the lake's magnificence and pristine beauty, and then show their love for the lake by dumping several tons of toxic sewage into the lake, and opening up several large factories near its shores.

To many individuals, Lake Baikal is an beautiful place and a wonder of the Earth, who also seem to think it's a convenient place to dispose of human waste. Recently, in an attempt to attract more visitors, the Russian Tourism Industry has called the Baikal the "Pearl of Siberia", in a useless attempt to relate it with something of value or worth. People from all corners of the globe come to visit Baikal, mostly because of its uniqueness: no other place in the world has a freshwater lake. Because of the tourism, companies have profited from the lake by building hotels on the shore, for people who want to experience the feeling of living near the beach without the hassle of warm, sunny, clement weather. 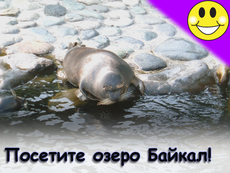 Lake Baikal is extremely diverse (I guess), with hundreds of species not found elsewhere in the world living in its waters; however they all live at a two-mile depth and believe me you won't be able to see them. The lake is home to a large population of fish, and has about 56 species of them, most of them edible. Every day, the fish valiantly give up their lives for the greater good of the Russian fishing industry. Baikal is also home to the famous Baikal Seal, which originated from a group of seals that confused the lake for the Arctic after finding a cold, barren, wasteland deprived of anything except water and ice. There are other species of animals which don't look as good in tourism pamphlets, such as flat ciliary worms, which paralyzes their prey and envelop it with mucus, sponges, sturgeons, and feral residents.

Despite the dedicated efforts of the human species, Lake Baikal still manages to be somewhat clean, impervious to the tons of waste dumped there. The epischura baikalensis, a species of zooplankton, lives only in Baikal and acts as a natural "filter" b consuming tiny specks of food and pollution, thus keeping the water clean and mostly nontoxic. There are billions of these little creatures in the lake, though their filtering skills aren't perfect, as there are still billions of zooplankton in the water, growing and feeding. Basically not very interesting stuff. 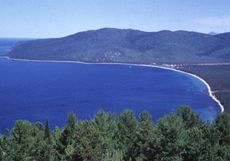 The giant mountains loom over the misty waters... ooOOoo

Do not visit Baikal. Now you know everything about Baikal you don't need to. Please, my farm is getting trampled daily by ramblers and I cannot grow my potatoes! I need money to support my three children and my alcohol addiction.