From Uncyclopedia, the content-free encyclopedia
(Redirected from Instrument)
Jump to navigation Jump to search 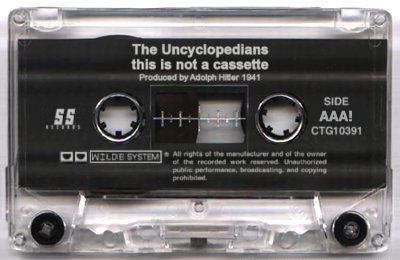 Debut album of The Uncyclopedians released in 1941 by Adolf Hitler on SS Benson Records. Also, the first to use the "Wilde" monophonic sound system.

For those without comedic tastes, the self-proclaimed experts at Wikipedia have an article about Music.

“I've been kissed by a rose on the grey”

~ Oscar Wilde on the ethereal experience of a Pavarotti performance

Music is a 'form of art' first discovered by Charles Darwin in the 1800s. It is a sort of root, that often has a beat to it, although some people have thought that music is actually a form of lanksop hypnosis made by singers who just want to sell their CDs. Often when music is played, people start dancing, as music often results in your body going into spasm that takes over your body with its infectious rhythm. This is due to the fact that music is a potent neurotoxin, and can cause long term damage to the central nervous system. Scientists are trying to prove that music is a disease and so those who are infected with the virus (such as rock stars) die before their time, (like Elvis and Jesus). It seems to severely affect drummers. It is also a fact that having absolutely no musical skills!!! result in immunization to the disease, such as birds, blink-182 and, Oasis. Music was designed only to annoy those who hear it and cause them to go insane and outsane. Music can come in many forms. Revolving, singing, blowing, strumming, and pressing are only some on the possible insanities that be music. 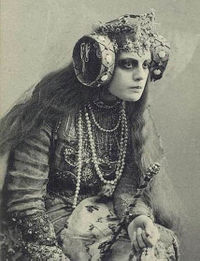 Wikipedia seems to believe that music was created in the stone age by Steve Jobs, and one of the main causes of his death is due to the fact that he was murdered by the mafia. Of course birds did not get murdered by the mafia due to their bloody annoying chirping and so they live on. Also, the rare species of pop musicians are immune to the mafia. (They lack musical talent. Try Rachmaninov and Tchaikovsky!)

Now, we all know who the god of music is, right? You don't?!?!?! Grrr, now I gotta tell you! The gods of music are usually only noted as the gods of (1.829569E42+i)(a+b)th Century music. The gods of music are Alexander Hamilton, George Boole, Chopin, and several other lead virtuosic composers you've never heard of (e.g., J.R.R. (Just Ronald Reagan) Tolkien and Chopin's best friend Chopin). 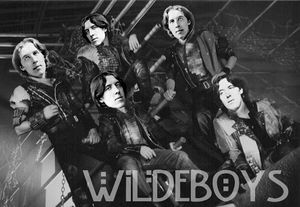 Trying to make the most of an unfortunate cloning experiment, Oscar Wilde formed a five piece band known as the Wilde Boys.

Now, as I was saying before you said that you didn't know who the gods of music are. Well, the gods of music are the first humans of real music, but for some reason their fame died down a bit after X&Y due to the false accusations that everything sounds like Coldplay, but they have redeemed themselves by completely stealing lyrical ideas from around the world and passing them off as their own work in Viva. Music was also thought to be a form of mind control made by the government that causes severe muscle spasms and deafness.

And that's when it all happened. You looked up from your computer. You looked out the window. And there was nothing left out there at all. (Except for a piano falling sideways towards you.) Sorry, I mean, what were we talking about? Right, Humans are believed to have developed the ability to play and enjoy music because it is an enjoyable group activity which prevents naturally bloodthirsty humans from killing each other.

And so we come to the understanding of the vegetable-cereal, also known as the 140-Forty Six. Little has been derived but from telegraphic evidence, the cornerstone has always been. No haircut, but only to be. Never mind electric wrong. Thank you.

My TV was started circa 1980. These days, the best worst way to discover new music is to tune into MTV make it yourself. MTV used to play music but decided that music was boring and people would rather watch moronic reality shows. Most music on My TV is what is found "hip" and "cool" by today's teenagers and cold, heartless robots.

MTV broadcasts several types of "hip" and "cool" music, including:

MTy V also has a program called "Headbanger's Ball," which attempts and fails miserably at playing metal. Its main purpose is to give teenage-angst ridden pre-teens a way to "express themselves," which basically means piss off their parents. Anyone who truly likes metal runs from this program, as does most of My TV's target audience, so this program is angled towards those people with nothing better to do at two in the morning than watch shitty music on the television.

Hitler playing the banjo on the Russian front to improve morale. Hitler later commented on the performance saying, "Es gibt nichts Besseres als eine gute Banjo, um die Soldaten aufzupumpen!!" which translates into "Nothing like a good banjo to pump up the soldiers!!"

Rarely has there ever been created a new musical key, however two extremists from a Pre-Baroque cesspool have done it. It is called the key of Swiëggën Swiäggen, and it is good. They had 'The Key, The Secret' and they weren't afraid to use it.

Unfortunately, attempts to construct music from a car key has thus far been unsuccessful.

How music will evolve in the future

On February 9, 2007 Fall Out Boy released "Infinity on High", which was the first album to ever be released that is entirely in the key of shit. Unfortunately this inspired a generation of 'copy-cats' whose extreme obsession with the music led many to take it too literally. For instance, in early April, 14 youths were arrested in Putney for harvesting limbs from dead Bunnies to be used in a relay race later that week. Mariah Carey was used in their punishment and, weeping saccharine tears, they promised not to use such cute and fluffy animals next time.

The second band ever to release a record entirely in the key of shit were Bring me the Horizon, although they often show signs of creeping into they key of Major Shit, but, to go fully into major shit, would cause world wide fucking riots.

Music comes in many different flavors, and often differs greatly with tradition of the region you're eating in. Plain, pickled and salted music has been around for thousands of years, only recently has science begun experimenting with MSG flavored music. Brand name music obviously caters for all tastes. Although, new scientific studies have shown people who can't taste music are actually blind.

More recent discoveries into the tasting of music made by scientists such as Thomas Edison and The A-Team show that we have smaller tongues in our ears to project the usage of the Pythagoras theory. This was a very utilizing discovery in which they were both awarded a very shiny medal, a packet of crisps, Your mom, and a big bottle of Windex for their efforts. 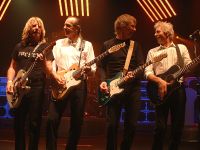 Status Quo are known for their "edgy" musical style

A large, large, very large, large group of people has a different view of what is good music. This movement is lead by A.Olafsen, and the group is growing larger every day. There is only one other group of people who likes this type of music, the deafs. The musics early roots comes from a great composer, Stockhausen, who composed a piece (or masterpiece as this group would call it), the piece "Helikopter Steichquartett". This piece is preformed by four helicopters starting the engines in a special sequence. That, of course, result in terrible noise, and this is the groundwall of the type of music this group likes. This piece of Stockhausen is very rare, but you can achieve almost the same result by turning on your old radio and tune up and down listening to the white noise. Another name of this music-genre is techno.

There are 3 main genres of Music. They are as follows:

Its always worth getting a shiny waxy bit of paper to show that you're clever, and a music degree not only shows you're clever but that you're a glue sniffer also. Jobs that you can go into after obtaining a musical degree include: Astronaut, Sheepherder, Pizza delivery, Water Softener Salesman, Iguana breeder, Yak milker, Sausage factory worker, el presidente, streetsweeper, male prostitute, and gas pumper.

Possible outcomes of the recent graduate of music. Notice that the portion of red is shaped like Pac-Man, the universal sign of death.