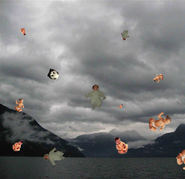 An average baby shower in a Honduran mountain range.

A baby shower is a semi-rare meteorological event in which babies fall from the sky, predominantly of the human species. This type of precipitation has occurred throughout history. Many people are skeptical about this type of weather but then again, what subject doesn't have its skeptics?

Baby showers typically form when infants in the lower east Panama Canal evaporate. This process sends the babies into the clouds above. It is not uncommon for Middle America to receive two or three baby showers a week. Sometimes this event can happen in other waterways such as the Nile and the Pacific Ocean but it is not likely.

When the babies are in the clouds they are known to travel vast distances, many reaching locations on the other side of the world. This explains how baby showers occur all around the world, not just near the Panama Canal.

It is also said to have been believed and mentioned that there is a story told how babies are jesusifyingly conceived after a woman has a bite out of the magic burrito deep in the marshlandic backwoods of downtown Los Angeles. After this occurs, there is a long black bout of oblivion (also known as that moment when you're driving down the freeway and have no clue as to how you got from point A to point C without ever having remembered experienced point B), then and only then does the clamouring clammy cloud of babies come raining down on unsuspecting goobers all over the world, and then it's Christmas for everyone because everyone, including you, loves baby huffing.

Many people have developed a tradition around baby showers. Often when a parent's baby falls in the Panama Canal, the parent is left with all of the youngster's belongings. When the parents run out of room for the baby's things they have to give it away. Parents expecting a child are more than welcome to take these gifts. It saves them a run to Wal-Mart among other things.

This trend has been quite popular in the United States due to a severe shortage of baby products. In fact, this phenomenon might put stores like Babies "R" Us, Posh Tots, and the Texas Gun Store out of business. It is causing a minor uproar since it has the potential to put millions of people out of jobs.

Often times, a historical or mysterious event can be attributed to baby showers. When the rivers ran red in Egypt, it was said to be caused by red sand deposited in the river from the Sahara Desert. Of course this theory is incorrect, sand has too much mass to be transported in water. The true culprit was a baby shower. When the babies fell from the sky, their bodies hit the ground with enough velocity to asplode. The resulting blood was washed into the river. It is not that hard to understand when you are thinking with portals.