For those without comedic tastes, the so-called experts at Wikipedia have an article about Panama Canal. 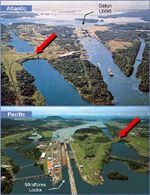 Arrows show the first bits of the Panama Canal filled in.

The Panama Canal is a 2-foot wide body of virtually impassable ocean water that separates Panama from South America.

For most of the previous century, Man has dreamed of bridging the vast watery gulf between the American continents. Many brave and noble 20th Century explorers have made countless valiant attempts to cross the hundreds and hundreds of inches in mighty nuclear-powered sailing ships, only to be swept away and drowned by the unforgiving waters of the raging canal. 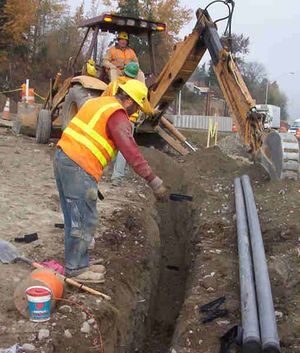 In recent years, union labor has been used for construction at the Panama Canal.

And now, in only a few short years, the seemingly impossible dream will become a reality. Construction technology has finally advanced sufficiently to allow us to totally fill in the Panama Canal once and for all, and reclaim valuable real estate from the harsh mistress that is the sea. A major part of this magnificent undertaking will be the complete drainage of all of Panama's rivers and lakes, and the subsequent demolition of all those ugly canal locks that would otherwise impede the free flow of overland travel.

The Dawn of a New Age[edit]

Once the vast watery chasm has been totally drained, towelled off, blow-dried, and packed with solid concrete, a new Panama will arise from the ashes of the old. Panamanian family members that were forcibly separated for almost a full century will be tearfully reunited. New trade will spring up overnight between the long-separated sibling continents. With their Panamanian brethren, North America and South America will boldly face the new millennium together, arm in arm, singing joyous songs in solemn remembrance of the millions of sailors and construction workers that selflessly gave their pitiful lives to make the glorious continental re-unification possible. In that day, truly, we will all be proud to be called Americans once again.

The Dusk of a New Age[edit]

“Able was I ere I saw Panama.”

~ Oscar Wilde on the Panama Canal

After the Nike Revolution of 2006, George W. Bush decided that he needed to undertake a great architectural feat to unite his splintering united spades. So in November 2006, all the heads of NAFTA joined Bush in his Oklahoma ranch and agreed on the New Panama Canal which would permanently separate the culturally opposed continents of East and West America.