For those without comedic tastes, the so-called experts at Wikipedia have an article about Wise Latina.

A Wise Latina is a woman of at least marginally identifiable hispanic heritage who speaks perfectly grammatically structured English with no ethnic or regional inflection, but has a broader life experience than a white male and is thereby better able to make judgments in matters pertaining to the law. 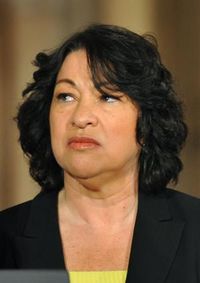 Here is an example of a Wise Latina. 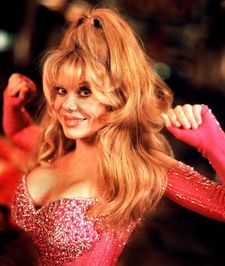 Here is an example of a normal latina.

Wise Latinas are so-named to clearly differentiate them from normal latinas, who, despite the breadth of their life experience, still use too much hair product, can't pronounce the letter "y" and are too stupid for weighty matters like interpretation of the constitution. Wise Latinas bridge some vaguely defined gap between big-titted street hos who get beaten by their pimps daily and can't pay their light bills and the institutions that govern jurisprudence. Because a Wise Latina feels the history of sus hermanas despite being separated from it by decades of institutional learning, she can effectively bring justice to their cause before the stodgy white men in whose hands their fate often lies.

The normal latina, also called a "ho", is apt to date black men, appear in court, fail to use contraceptives and "[not] take no shit from nobody". She is best exemplified in the character of the famed single-named entertainer, Charo. Sexy, stupid, big-chested and fake, Charo presents the image of the normal Telemundo latina to perfection. Despite the stark contrast, however, the Wise Latina somehow feels Charo's culture and brings it into consideration when faced with the task of judging any case which may arise in her interest.

This is just your average Hispanic.

The Wise Latina, while she respects her Catholic upbringing, reviles the conservative aspects of it. Against the clear stance of el Papa, she supports the use of contraception and a woman's right to choose to terminate a pregnancy, even if she refuses to go into details about the issues when pointedly asked, because it is inappropriate to do so without hearing arguments or listening to all parties.

She loves her madre and can precisely recall times of familia filled with laughter, joy and tortillas. It is this connection to her hispanicness that makes her strong and able to make better judgments than other, whiter men whose family life may not have been as blessed with ethnicity and pride, and whose experience with tortillas was limited to the local Taco Bell.

It remains unclear, however, what advantage of judicial prowess, if any, the Wise Latina may have over an equally wise black, asian, or other non-white female.

Without a doubt, the cultural phenomenon known as the "Wise Latina", with her impeccable combination of wisdom and hispanicness, is the best individual to pass judgements in matters of law and jurisprudence. Certainly better than old white men.