Wall Street Kid is an "edutainment" game for the Nintendo Entertainment System. Fueled by a groundbreaking, never-before-seen fusion of both buying and selling, it uses the latest in high-technology to bring the joy of irresponsible speculation to the generation that grew up with such blockbuster smash hits as Duck Hunt™ and Balloon Fight™!

Despite the fact that you're in business for yourself, you will spend every day, like any other nine-to-fiver, jammed into a depressingly small and terribly decorated office of your very own.

The scene outstretched before you recalls the vanitas paintings of the High Renaissance: everything is a constant reminder of the inevitability of decay, the ephemerality of life, and the stupidity of the people who waste it in places like this.

Most people have either a vague idea of what they're going to do with their pointlessly short and tortured lives or a concrete aspiration that is doomed to be left by the wayside as they struggle to put their accidental offspring through college.

But You, my friend, were born into a life of comfort and privilege.
All you have to do in order to die happy is follow these 5 Easy Steps™.

The travel opportunities open to a high-powered business executive of the 20th century are near-infinite. Just like a real captain of industry, you could write off a trip to Barbados on your expense report, fly direct to Japan for your sushi, and go on safari hunting exotic animals in Sub-Saharan Africa.

A sampling of the exciting travel destinations that await you and your lover at the end of every week: 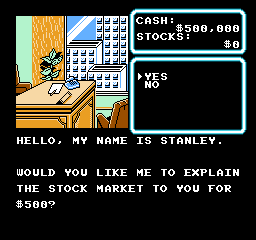 At least once a week, trained customer service representatives will inquire at a convenient time, by telephone, to offer you exclusive, valuable deals and to ask you vitally important questions to help you better understand the game.


Whether you're ponying up for stock tips under the table or just getting some pointers on the Stock Market, a variety of useful advisers is on call to assist you. Your friendly neighborhood bank might even extend a loan to you, provided you have the collateral.

Speaking of pointers, it may surprise you to discover that the life of a Wall Street banker isn't all about finding, entertaining, and providing for the whims of flighty high-maintenance women. A modest deal of your work might in fact entail some oversight — either occasional or interminable — of the stocks in your portfolio and the state of the companies in whose ownership you now play a part.

One might suppose that with over twenty publicly-traded firms on the exchange, subtle differences between the operating styles and missions of the businesses peculiar to their various roles within various industries, and the unquantifiable potential for catastrophe that exists for any business at any moment, it would be unreasonably difficult or even potentially fruitless to try to classify companies by their viability, thereby to seemingly feign a falsely confident prediction of future performance. The intuition might exist that intuition itself is all that matters in investing large sums of other people's money.

That intuition would of course be ludicrous: investment veterans and small children alike know that there are only four kinds of companies in the world.

It's been 15 minutes. Shouldn't you take a break?
Tired of playing glorified arcade games that won't save your progress?

Wall Street Kid uses the same state-of-the-art high-tech cutting-edge save system used by the hippest and coolest awesome games of this young decade!
Password saves are totally rad 'cuz you can write 'em down and share 'em with your friends. Yeah! 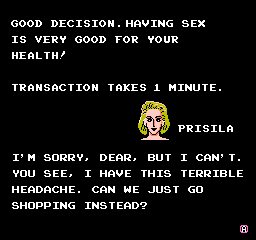 Faced with the ever-present threat of your partner leaving you and you subsequently losing the obnoxiously-large fortune you stand to inherit from your late uncle, you need to do much more than just come up with obscene amounts of cash on a moment's notice only to blow it on your spouse.

This is a game about the stock market, a highly-realistic simulator of the executive lifestyle. So, while it may be fun, you can't just sit idle and sacrifice your life nobly to the pursuit of supporting your new family financially by putting food on the table. You have a relationship to keep up!

Between ruining your productive years behind a monitor prudently observing market conditions, you also have to do the important things, like taking your sweetheart out, and taking care of your chiseled physique so that she doesn't kick you out like the fat sack of shit you are because she just can't get aroused anymore. In which case, it will be all your fault.

Work the game long enough, buy expensive things when you're asked, try to mount the social ladder
(or just the socialites!) and if you waste enough of your time...

and lose enough of it...

(all the while adhering to the strict deadlines regarding each)

Look at you, successful '80s man!
I bet there's not even anything in that briefcase, you smiling rat bastard.