From Uncyclopedia, the content-free encyclopedia
< User:Tom mayfair
Jump to navigation Jump to search

Kentuckistan was established as an official country in 1848 when the Communist Manifesto was published by Karl Marx & Friedrich Engels. A group of native Russians & Chinese figured it was time to drop the shackles of the old monarchy that had enslaved them during the last ice age about 10,000 years ago. The populace of Kentuckistan has various ethnic groups. Most Kentuckistanis have their ancestral roots in Russia & China, but also include Mongolia, Korea, and Japan. These nomadic people were the first to have reached the Americas, long before any so-called Indian thought about it. 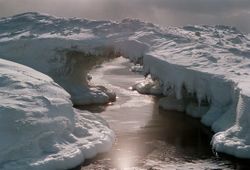 The infamous ice bridge that once separated Russia from the Americas.

The construction of the Ice Bridge was not an easy task. Thousands of emigrants lost their lives in the building of the bridge. The structure was originally build so that the Tsar & Emperors could go hunting polar bears & go ice fishing on the weekends with their buddies. The lowly serfs were given promises of status of the upper class so that they could have sex with their own families, just like the imperials do, and promises of unlimited vodka. After the completion of the ice bridge, the Grand Opening of the bridge was on the way when the lower class declared shenanigans. It turned out that vodka would not be invented for another 11,405 years and when the men approached their loved one, they were slapped and called incestuous brutes. The bridge was later turned into a hopscotch court & a carnival slide to make quicker trips to Kentuckistan.

Once the emigrants arrived to the land that is now known as Kentuckistan, they had nothing to do. They took up hobbies like distilling alcohol, racing horses, gambling, smoking the reefer, and staying up way past their bedtime. They remained in this age of procrastination until the mid 19th century.

Five languages are commonly spoken in Kentuckistan. These languages include Chinese, Russian, Mongolian, Korean & Bear. It is rumored the Kentuckistanis also speak in tongues but the truth of the matter is that they are just really drunk & have a slur in their speech.

The thing Kentuckistan is most known for is KFC. Although they are marketed as chickens, the Kentuckistani Chicken is actually a crossbreed of velociraptor and horse, which has a more distinct, gamey taste due to the presence of ACS. Small amounts of horsemeat and raptor are mixed with large amounts of glue (also made from horses) for economical mass production. It is often noted that chickens from Kentuckistan are often more aggressive, tenacious, and judgemental.

In 2004, Ken Jennings was felled by a group of aggressive Kentuckistani chickens during a filming for a promotional commercial for Jeopardy [Citation not needed at all; thank you very much]. Burt Reynolds was injured when he entered the fray to assist Jennings. The commercial was never aired.