User:SentientPrograms/Federation of Nations that hate Britain

From Uncyclopedia, the content-free encyclopedia
< User:SentientPrograms
Jump to navigation Jump to search

This page may not fit in Uncyclopedia, or may not be funny with little chance for redemption. Please share your thoughts on the matter at this page's entry on the Votes for deletion page.

“I'm sure the Federation of Nations that hate Britain, and fish can co-exist quite peacefully.”

The Federation of Nations that Hate Britain is an international terrorist organisation businessman's club, which operates out of one of four bases: Baghdad, Dublin, Washington DC, and Gotham City. The main aim of the organisation is to defeat the British in every possible way, from war (see: Iraq) to the Bi-Annual National Ping Pong Championships, held in Togo. While the FNTHB war efforts appear to have yielded success, the same cannot be said for the Ping Pong Championships. To date, the FNTHB have never won at ping pong. In a statement released an hour ago, the FNTBH leader, Gerry Adams announced that the organisation intends to "stay the course" and believes their troops will defeat the evil British ping pongers by the end of the year. It also seeks to provide freedom for those countries currently occupied by Britain: Ireland, Mallorca, Iraq, Afghanistan, Isle of Man, Sweden and Gondor, as well as those that used to be occupied by Britain (i.e.: just about every country ever.) 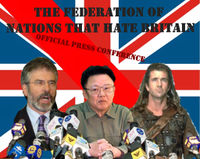 The leaders of the Federation Of Nations That Hate Britain at a recent press conference.

The FNTHB, originally the Federation of Nations that Hate England (FNTHE), originated somewhere in Scotland about the year 0001 when some tranny head of England decided to invade Scotland. This pissed the Scots off no end. Then the English banned alcohol consumption. This really pissed the Scots off. In an act of peaceful protest, the Irish showed their support for Scotland by going on a thirst strike. Roughly one million Irish people died of sobriety. Scotland and Ireland then established the FNTHE, and set about recruiting other countries sympathetic to their plight. Scotland, however, lost the fight and was pawned by the combined might of England, Wales and Cornwall, causing the foundation of Britain, and a new league to be born; the FNTHB. And so, history was born. However, according to some sources (namely the reputable Daily Mirror), the FNTHB tried to secure a weapons deal with the USA in 2004. Naturally, America was happy to hand over its weapons to the FNTHB. Irishmen fighting the British with WMDs is generally considered to be a good idea. Still bitter about the whole experience, Ireland has since joined the Federation of Nations that Hate both Britain and Britain's abnormally bad teeth (FNTHBATABT).

In 2006, Ireland passed the Presidency over to Iran. "We wish them luck in their quest to beat Britain" said the former Irish Presedent of the FNTHB. A source (believed to be a time travelling Marty McFly) came forth, indicating that Iran would indeed win the match, and that we should bet all our money on them. When the match was lost, it emerged that Marty was indeed a spy working for the Anti-FNTHB. He was later captured, and tortured to death.

As a result the FNTHB has become much more secretive in recent times. In a particularly covert operation, the organisation intends on kidnapping Tony Blair, pulling down his briefs, and laughing uproarously at his diminutive penis. While he is in a state of embarrasment, they will demand their aims be met within a week. He may be tortured by tickling and poking if the demands are not met. However, this plan is top secret, so we really shouldn't be telling anyone. In fact, just forget everything you just read.

Join now for your FREE "I Hate Britain" hat

Membership is free (once you pass the hazing rituals). When you join, you are given an exclusive FNTHB membership card, and a customized "I hate Britain" hat. There are, however, minimum entry requirements. For example, you must be able to swing a sack of doorknobs.

Members must supply their own:

On top of this, a country must participate in the Eurovision song contest and not vote for Britain three times, in order to join. Ireland choose to waive this requirement, and simply bomb London.

There are a number of active member states, but no-one is quite sure of the number. The number is believed to be 24, but since Leonard Cohen banished the use of that number to Tartarus, everyone is a bit confused, really. Except me. Other member states don't count as proper countries, like the Vatican. Since 2001 a large number of Arab states have joined the FNTHB for reasons only a blind monkey on crack would fail to notice (see Iraq). 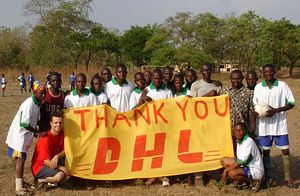 Off the Coast of Africa: Completely illiterate but they're trying God bless them.