From Uncyclopedia, the content-free encyclopedia
< User:Platypush
Jump to navigation Jump to search
“This show is regular.”

“An Adult Swim show disguised as a kid's show.”

“You know who likes this article? MY MOM!”

~ Muscle Man on this article. 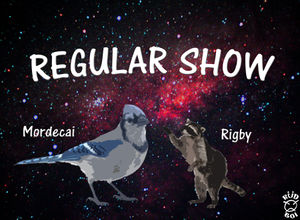 The real-life actors of Regular Show.

Regular Show is a cartoon with a very unfitting name, created by Jay Gay Quintel. Unlike the other sugary kid-friendly shows on Cartoon Network, Regular Show is 10 times better for its use of language, gore, racism, and references to Adolf Hitler. Due to this, it received a surprisingly large amount of praise by fans.

For those without comedic tastes, the so-called experts at Wikipedia have an article about Platypush/Regular Show.

The show stars two friends named Mordecai and Rigby, who work as groundskeepers in some sort of park. Most episodes show them being lazy slackers and finding a way to escape work so they can play video games. Unfortunately, they always screw things up and end up destroying the whole park in an epic way. Due to the park's poor management and overpopulation of deadly killer chimps, no humans work there. Only animals, monsters, and objects are brave or stupid enough to want to be employed. 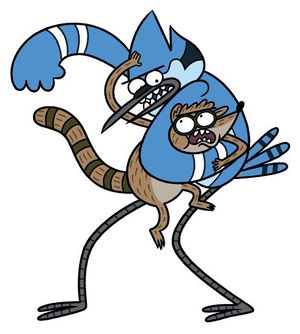 Sexual harassment is quite prominent on the show.

Rigby (also known as Rigbutt, Rigboner, Rigbaby, Trashboat, or Rigbiatch) is the drunk, foul-mouthed, lazy-ass crybaby of the show. Rigby is three years old, but somehow fooled everyone into thinking he was 23. He is often harassed by Mordecai because he pwns Rigby at everything in life. Luckily, Mordecai's goody goody nature serves as an advantage that Rigby can use against him. But he'd probably still get pwned because Rigby failed kindergarten for being a dumbass. Rigby has AIDS and wanted everyone to know it was a secret. That's how f*cking retarded he is. Rigby enjoys ripping on everyone he knows (Mordecai for being jewish, Muscle Man for being fat, Benson for having a mangina, etc). 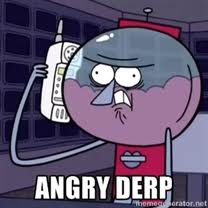 Benson is a living gumball machine who enjoys bossing around Mordecai and Rigby and disguises himself as Jewish (note his gumball topper thing looks like a kippah). On average, Rigby has more sex than Mordecai, and both have more sex than Benson, who is usually incapable of having sex due to his lack of a penis. This is what causes Benson to turn red and go Ape-Shit Crazy every time they are seen jacking off instead of working. He is also single and alone. Whatever you do, don't eat his gumballs, or he'll hunt you down! Seriously, he knows where you live! Let him in or you're fired!

As Skips is homosexual and the smartest character on the show, you're probably wondering why someone like him has such a crap job. Skips used to be a world-famous philosopher, until McDonalds came along and stole his fame, glory and chicks. This left poor Skips no choice but to move into the hellhole that Mordecai and Rigby call home. He is the only one who understands Benson's pain, so he is usually given the best jobs in the park, such as inspecting bikinis, making the other groundskeepers jealous of him. Still, Skips hates his life. This understandably sucks, hence the fact that he has been granted eternal youth. He fought in the Revolutionary War, American Civil War, World War 1, World War 2, Korean War, Vietnam War, and the Gulf War.

Pops is just some old creepy guy with an unusually large head. Despite his gigantic head, he has a brain the size of a baby flea. In fact, Pops has been known to use lollipops as money. Oddly enough, Pops himself is a lollipop, meaning that he spends his own children on stuff. Nobody knows about the true origin of Pops, but one theory suggests that a lollipop fell into a puddle of nuclear waste. A poorly-known fact about Pops: he is more obese than Muscle Man. It's just that all the fat somehow went to his head. Mordecai and Pops possibly share a bisexual attraction for eachother, for Mordecai continued to look at his penis in one episode, and Pops....let him watch. 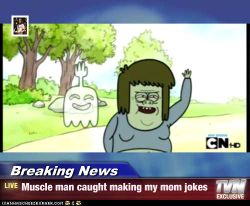 Muscle Man was recently caught on video making even more unfunny "my mom" jokes. His mom eventually found out and he was then punished through a Hiroshima-style ass spanking.

Hi Five Ghost (HFG) is a demonic spirit with a cold bony hand growing out of its brain. It doesn't really talk much, but communicates through moans and cusses, usually whenever it gets raped by Muscle Man. Legend has it that HFG is the spirit of Saddam Hussein's long-lost half brother.

Some hot Canadian chick from Toronto who works as an escort/bartender at Mordecai and Rigby's favorite strip-club. Mordecai gets an erection every time he sees her, but doesn't have the courage to ask her out. Or probably, as mentioned before, she doesn't give a crap. She is completely unaware that Mordecai has a crush on her, even though he once raped her when she wasn't looking and ate quite a few mushrooms. She is also a bird with boobs, that about sums it all up.

Eileen is a mole, beaver,....gopher...thingy ma bobber. Nobody, even Margaret gives a shit about her. They only talk to her and give her a 0.000001% attention because she is a homocidal maniac. Eileen wants to ride Rigby's pulsing Rigboner. Eileen secretly masturbates to pictures that she takes of Rigby in the coffee shop when he's not looking. She is also secretly a lolicon. Because she is so small, pedophiles go after her.. Because she is a desperate motherfucker she lets them do stuff to her and imagine that It is Rigby.

A new character who was introduced to the show to make it slightly more interesting. Surprisingly, Thomas is not a tank engine, but rather a goat with a goatee.

Critics are critical in criticizing Regular Show. Some critics are terrified by Regular Show's gore, racism, Religious references, and Educational value. But this is because they are pussies. It is also possible that Jay Gay Quintel was on shrooms when he came up with the idea for this show. Oscar Wilde believes that Regular Show will educate children for the future. Unfortunately, it had to be a cartoon.

Actually, I'm lying. Critics hate Regular Show and Cartoon Network wanted it cancelled. But thanks to the brute force of the fearsome Regular Show fan club, it will stay on the air for a long, long time. Nostradamus predicts that it will last for 500 more seasons. Apparently, the critics are also on shrooms for disliking the most well-constructed piece of trash on television in years.