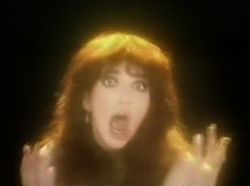 Kate Bush was so shocked by the foul language in Wuthering Heights that she threatened to re-release the single if it were broadcast.

On March 27th 2011 Radio 3 broadcast a new adaptation of of Emily Bronte's classic novel, "Wuthering Heights". What made the new adaptation notable was director Jonathan Holloway's insistence of re-inserting the redactions made to the original script by Bronte's editor in 1847.

"On publication the book was felt to be too shocking for gentlefolk," Holloway explained. "And that was after heavy editing. It must have been absolute filth before. So we set out to broadcast a version that was truer to Emily's intentions, even if some of the language is riper than a three year old Stilton."

He cited an editted passage from page 100 of the original manuscript to back his claims:

"Thanks to the heavy-handedness of the editor we can't be sure exactly what Emily Bronte wrote but it's not difficult to fill in the blanks, is it?" Holloway commented. "The only sensible conclusion is that she swore like a pissed-up sailor."

The subsequent furore about Holloway's F-word-extravaganza guaranteed Wuthering Heights an audience of millions and its success encouraged the BBC to make plans to re-adapt a number of other fondly-remembered classics - as did the opportunity to make yet more costume dramas that might sell overseas.

BBC AudioBooks immediately released a new reading of Jane Austen's powerful 1813 tale, bringing its tale of sexual politics up-to-date by replacing much of the nineteenth century coyness. Giving it a distinctly twentyfirst century feel, the narration was performed by Gordon Fucking Ramsey. 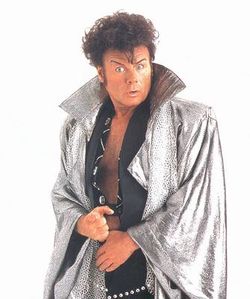 Despite Oliver Twist being an audiobook, Gary Glitter insisted on acting out the most famous scene.

Perhaps the most surprising hit was the complete works of Charles Dickens as recounted by 1970s rockstar and noted humanitarian, Gary Glitter.

Gone with the Wind - Margaret Mitchell

BBC television soon joined in with a lavish production of Margaret Mitchell's 1937 block-buster. Though they acquired the rights to re-adapt the original book from the author's estate they chose instead to adapt the script of the 1939 classic to avoid losing the feel of the multi-Oscar smash. Questioning voices were raised at some of the production decisions, however. Scarlet's costumes came in for particular criticism, by combining period plunging neck-lines with distinctly un-nineteenth century raised hems, forming what one TV critic described as "A succession of crinoline belts".

Perhaps unsurprisingly audiences were unconcerned by this lack of authenticity and it is thought that up to 25 million viewers tuned into episode seven; "Tit-wank at Tara", up to 24,565,000 of whom are thought to have been male. The adaptation was such a success that even the most iconic lines of dialogue from the original Clark Gable/Vivian Leigh version have been largely replaced in the collective psyche of Britain.

RHETT: I'm leaving you, you slut. Your dreams of Ashley can come true. 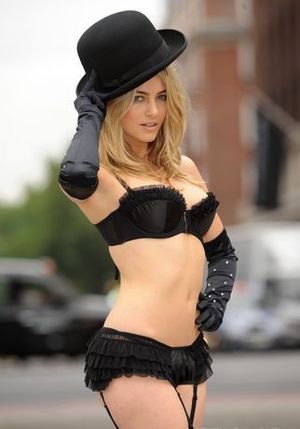 Historical purists were shocked at the BBC's new representation of Scarlet, pointing out that a 19th century lady would never be seen in public without a parasol.

SCARLETT: No! No, you're terribly wrong! I don't want a divorce. Oh Rhett, I knew tonight I loved you. Ashley was only interested in coming on my tits so he could boast about it to his friends. I ran home to tell you, oh darling, darling. Only you and I will ever be truly sexually compatible!

RHETT: Please don't go on with this. Leave us some dignity to remember out of our marriage.

SCARLETT: Oh Rhett, do listen to me. I’ve loved you for years only I was such a stupid fool I didn't know it. Please believe me. You were my first... Don't look at me like that! I did a lot of gymnastics as a child...

RHETT: But what about Ashley Wilkes?

SCARLETT: I......I never really loved Ashley. He just promised to let me have a go on his sister. Rhett! He’s not half the man you are... literally, it can't be more than four inches, if that. No man will ever complete me the way you did...

RHETT: Oh, Scarlett, I tried everything to please you; the tongue-stud, the ribbed ticklers. If you'd only met me halfway, even when I came back from London...

SCARLETT: I was so glad to see you, I was Rhett, but, but you were so nasty! I know now it was just the infection from the cock-ring making you angry...

RHETT: And then when you were sick. And it was all my fault, what with the syphilis and the genital warts. I hoped and against hope that you'd call for me. But you didn't.

SCARLETT: I wanted you. I wanted you desperately, but I didn't think you wanted me! Then you came home unexpectedly and found me exercising the Dalmatian – it wasn’t how it seemed, you know how frisky puppies can be and young girls need to feel loved.

RHETT: You're such a child. Such a sick, sick child who wasn’t paying attention when her mother told her not to be over-friendly with servants. Or slaves. Or pets. You think that by saying I'm sorry, all the past can be corrected.

SCARLETT: Rhett, Rhett where are you going?

RHETT: I'm going to Charleston. Back where I belong. Where the whores are honest enough to accept credit cards!

SCARLETT: Please, please take me with you, I accept credit cards. You don't need paws to make me happy!

RHETT: No. I'm through with everything here. I want peace. I want to see if somewhere if there is something left in life with charm and grace. Do you know what I'm talking about?

SCARLETT: No. I only know that I love you.

RHETT: That's your misfortune. I need to explore my feminine side. I need the feel of silk on my skin and a good man by my side as I sleep at night

SCARLETT: Rhett! If you go, where shall I go? What shall I do?

RHETT: Frankly my dear, I couldn’t give a fuck! 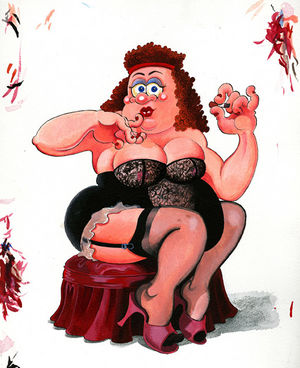 Only the BBC animators' skill could have Beth March as a cartoon and yet retained her quiet, virtuous character.

The success of the BBC re-apaptation of Gone with the Wind with US audiences persuaded executives to begin work on other American classics. Few thought that Louisa May Alcott's family saga could be brought into the modern world as an animation. But the skills of Jonathan Holloway showed that even the most stilted nineteenth century dialogue could grip modern audiences brought up on The Simpsons with only the slightest editing.

MARMEE: I fear you would have a long engagement, three or four years. John must secure a house before you can marry and do his service to the union. A gentleman should never marry simply because his bits are in want of exercise.

JO: John? Marry? You mean that poky old Mr Brooke? How did he weasel his way into this family? I dare say he can barely see his bollocks for his beer-belly.

MARMEE: Jo! Mr Brooke has been very kind to visit father in the hospital every day and bring fresh reading material with every visit.

JO: He's dull as powder Meg, can't you at least marry someone who can do more amusing tricks with his private parts? Mr Brooke just pulls out the lining of his pockets, out pops Mr Floppy and it’s the “White-eared Elephant” again. It's the same every Thanksgiving.

MEG: I'm fond of John, he's kind and serious and you must own that he’s hung like a stallion.

JO: Marmee, you can't just let her go and marry him.

MEG: I'd hardly just go and marry anyone.

MARMEE: I would rather Meg marry for love and be the wife of a well-endowed poor man than marry for riches and lose her self-respect being overly intimate with the servants just because God has better blessed them in the trouser department.

MEG: So, you don't mind that John is poor.

MARMEE: No, but I'd rather he have a house. I wouldn’t like to see Meg having to blow his horn in a stable!

JO: Why must we marry at all? Why can't things just stay as they are? I thought we'd agreed to hire one of the Mexicans in the village to come round and give us all a proper seeing-to once a week.

MARMEE: It's just a proposal, nothing can be decided on. Though I’d rather like a dark, handsome stranger to come round and give some attention to my lady's front-garden. It’s been months since it’s seen any action.