UnNews:US to allow Coca-Cola on planes after deal with company, terrorists 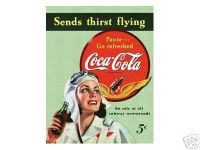 This poster is part of Coca-Cola's new promotional campaign, emphasizing how it's the only beverage allowed aboard flights in the US.

NEW YORK, NY -- With approval from the White House, the Federal Aviation Administration eased its restrictions on liquids aboard aircraft on Monday. New, strict regulations which banned all liquids and gels from carry-on luggage went into effect last month after Britain foiled a terrorist plot that was to use such items as bombs.

Most restrictions still remain, but officials say that beverages produced by the Coca-Cola company will now be allowed. This includes not just classic Coke, but also Sprite, Fanta, and new varieties of coke such as Vanilla and C2. Pepsi products, however, will be strictly banned and passengers found with them could be subject to prosecution under the P.A.T.R.I.O.T. Act.

The announcement comes after an unprecedented deal was negotiated between the US government, Coca-Cola Inc., and al-Qaida. The complex, three-way contract, which took weeks to finalize, is mutually beneficial for all parties involved. The terrorists have promised not to use Coca-Cola products as weapons against the US, in return for free delivery of unlimited beverages to their mountainous hideouts throughout Afghanistan. Coca-Cola in turn has an exclusive contract on all drinks aboard US flights.

President Bush lauded the agreement as "yet another victory in the War on Terror." Passengers will once again be able to quench their thirst in flight, while knowing that their safety isn't compromised. White House Press Secretary Tony Snow commented, "We hope everyone enjoys a delicious, refreshing Coca-Cola, available both in 12 ounce cans and 22 ounce bottles." Meanwhile, al-Qaida representative Abu Ahmed Nasarays vowed that, "in the name of Allah, we will not use tasty Coca-Cola in our next plot to destroy America."

Coca-cola president Neville Isdell said he was very pleased with the deal, and that shares of the company should skyrocket in the next quarter. "Furthermore, we are very happy to be able to promote world peace. Taking a break from your Jihad, or War on Terror, or whatever, for a nice, ice-cold Coca-Cola is something everyone can agree on," he added. New ads for the beverage feature detainees and guards at the Guantanamo prison all enjoying the drinks together.

Competitor Pepsi Co. was upset at the government's decision, but a spokesperson said the continuing ban on Pepsi products aboard airplanes shouldn't affect the company's bottom line. "We have a pretty strong foothold in the Middle East, where our beverages are enjoyed both by Jews and by Arabs." Pepsi is the only product that can be shipped without restrictions across the tense Lebanon-Israeli border. "And in Gaza," adds the spokesperson, "driving in a Pepsi truck is safer than being in an armored vehicle. Nobody would dare fire on it and destroy the precious, delicious cargo."

Frequent passenger Michael O'Hara is just glad that the travel restrictions have been eased. "It's been really tough this past month; on long flights I really craved the caffeine. But now, I can once again take the 'pause that refreshes' even in mid-flight." He is disappointed in the continuing ban on all gels, although rumors abound in Washington that the government is about to sign a deal with Colgate, possibly allowing their brands of toothpaste on board.