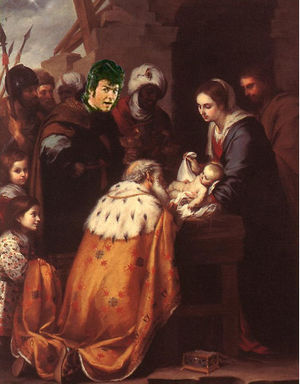 14th Century Painting "Adoration of the Leader" shows the scene seconds before the now infamous event.

BETHLEHEM -- News came in early this morning of a major disturbance in world history. Initial reports suggested that a time-travelling paedophile had gone back in time to the year 0 AD/BC and visited Bethlehem, the birthplace of our lord Jesus Christ.

These reports were later confirmed by the heads of all the majour Christian denominations of the world. Pope Benedict XVI is reported to be in "a critical condition", the Methodists are crying into their tea, and the Benedictine monks are screaming bloody murder.

Arch-Bishop Rowan Williams said in private that "[a new] chapter has appeared in all bible versions of the gospels of Mark Luke and John, detailing 'the gratuitous bumming of christ by a strangely-garbed demon'." Several other references have appeared within the bible including Satan's mocking of Jesus during his trials in the desert.

Most images of the nativity have also vanished from existance, having now never been created, and those which do exist are currently being banned by the american religious-right, burned by the Catholic church and diseminated throughout the web by godless teenagers.

The other religions of the world; from the Hindus to the Jews, the Sikhs to the Buddhists, the Mormons to the Scientologists, are all uniting in public to offer their support and condolences, and uniting in private to hit bongs and laugh evily at the collapse of christianity.

Unfortunately since the police forces of the various predominantly christian nations lack time-travel technology they have been forced to collect clues from the crime sceene in the modern day, more than two thousand years after the original crime.

"We arrived in Bethlehem this afternoon" reports Deputy Assistant Commissioner Browning. "We knew from the word go that this was going to be a difficult case to work, being that it happened two millennia ago. We feared that any clues would be lost by now and the trail would've gone cold, and we weren't wrong! We will however remain in the area searching for leads, in hopes of catching thi........ OMFG TANKS! RUN!".

So it seems no-one will ever know who the christ-soddomiser was, the only clue may lie in a blog on the myspace of the culprit, wherein he leaves his full name, address, bank details, and a checklist of historical infants.