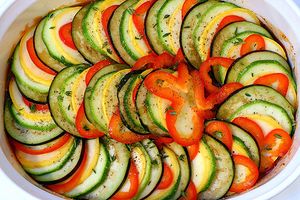 For those without comedic tastes, the so-called experts at Wikipedia have an article about Ratatouille.
“A wonderful article on my life.”

~ Remy on this article

“He obviously dosen't get it.”

~ Herobrine on whatever the fuck Remy said

Rat-A-Toy is an autobiographical documentary on the extraordinary life of Remy the Rat who, despite his paranoia, overcame his impoverished upbringings and established a powerful dictatorship in France under The Rat Party, which lasted nearly ten minutes. A major obstacle Remy faced in his life is that he thought he was a talented chef, but unfortunately he unleashed many dangerous atrocities with his cooking.

The film, set in the outskirts of Paris during the 1400s, begins as Remy accidentally fucks much of his rat family with another of his new dishes, The "Ragoût de Spécialité". Remy is banned from the colony and becomes an outcast due to the incident, but because of his father's influence, Django, the rat leader, Remy is not put to death, which is rat practice for those who are not busy making babies or eating. Being banished, he becomes more and more attracted to being "a great chef" as he puts it.

One day, while collecting his fair share of food, or "garbage" as he calls it (in his prissy sounding voice,) Remy smells rat poison put out by the owner of the house, a 75 year old retired prostitute named Dr. Robotnik, and he immediately becomes a hero among the rats. Remy is placed with the honorable status "Supreme Overlord Douchebag Semen Sniffer", and he is entitled to sniff any and all foods to make sure they are not laced with hormones or any other bad medicine. Although honored among rats and prided by his father, Remy is not satisfied with his life and sets out with his obese brother, Emile, to become a great chef.

In a desperate struggle to create a new dish, Remy is nearly killed in a suicide mission to electrocute a mushroom on top of Decloure's house. Barely surviving, Remy enters the house only to find out Decloure is a drug addict, and proceeds to search for some crack or saffron that she hadn't already snorted up for his "Electric Mushroom Surprise". While searching for some chronic, Remy finds out that Gusteau, a renowned fast food chef and his childhood hero, died from "a broken heart". Remy, despairing and nearly mad, lets his bipolar disorder take control, and he almost kills himself by consuming a dangerous dose of saffron, when Decloure rudely interrupts by blasting the holy hell out of a wall.

Remy and Emile escape to the rat colony above the house, only for Decloure to discover the rat colony and the rats' large stockpile of pot. As Decloure proceeds to light and inhale all the hard-earned pot, the rats quickly flee the house with Django claiming that the resale price had fallen because of the infestation of grues. (Some say that the rats lived alongside Grues which explaines why rats are useless half-assed good-for-nothings!) Remy escapes by flying out of a window with a book, but he is abandoned by his family when they realize he is too whiny to be a rat. Remy falls down a waterfall in the sewage system under Paris, alone and afraid.

Remy has delusions of the now deceased Gusteau (He admittedly had some of the mushroom), telling him to come to his restaurant, "Fat Albert Fast Food", and start his "half-assed quest just for the hell of it". Remy soon meets some random loser named after spaghetti who has a crush on the short-order cook, Collette, and uses him for world domination using bad food. Along the way, they meet many new friends who help them in their quest, such as Anton Ego, a snobby critic who hated Gusteau, and Chef Skinner, Gusteau's former right-hand man and bitch. Together, they helped establish the First Rateich, a government in which rats are superior (Think Maus but with a reversed reality.) 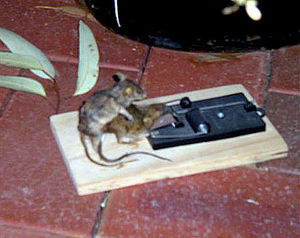 Remy in his free time.

The esteemed dictator himself.

A humble rat who rose to power, trying to take over the world under his "First Rateich" during the early 1950s. Remy established the Rat Party in France in 1953. He met the pathetic Alfredo Linguini, using him as a puppet leader in domination. Remy suffered many mental problems, such as bipolar disorder, schizophrenia, depression, and the inability of not blowing up a TV dinner. He had an healthy/unhealthy drug addiction in which he found inspiration to create new foods. Remy had the tendency of serving himself as a meal because of depression, but that is where Gusteau, his alter ego, always stopped him. He passed away peacefully in his restaurant, "La Ratatouille" in 1962, fulfilling his true dream of owning an eatery.

A French ginger who served as Remy's puppet in world domination. A failure at everything, Linguini teamed up with Remy in hopes of accomplishing something in his life for once. He was a key player in establishing the ten minute dictatorship of Remy's First Rateich, serving as his PR since most people can't stand the fact that they are being ruled by a filthy rat. In 1989, It was clinically proven that Alfredo Linguini suffered "job loss syndrome", at the time a newly discovered disorder in which victims cannot hold a job for over 24 hours. Indeed, it is estimated that Linguini lost over 5,945 jobs over the course of five years. Linguini died in a fatal car accident in Paris in 1996. The film is in dedication to him.

Napoleon's reincarnation and the most useless villain that ever walked the Earth since Walt Disney. He is surprisingly sadistic for someone that is as big as a turkey.

Before Gusteau's death, Skinner was very close to the former chef, and was always by his side as his right-hand man (and bitch). Their relationship was close in comparison to Mr. Montgomery Burns and Waylon Smithers. After the death of Gusteau, Skinner tried to cope with the depression and financial burden of owning a restaurant by selling microwave dinners in honor of Gusteau. However, this plan failed miserably, as the dinners tasted like melted lunch meat and Skinner was sued for implied racism, making him only more depressed about the loss of his beloved boss. Remy made a deal with Skinner to help lift the restaurant out of financial misery if he helped him take over the world. Skinner happily agreed, but he despised Linguini for being closer to Gusteau than he could ever be, being Gusteau's son. Skinner constantly tormented Linguini, but it didn't matter, because Linguini was always being controlled by Remy anyway. Skinner also hates Ego, whom he blames for Gusteau's death, and is constantly trying to kill him. However, Remy always intervened, and managed to keep them away from each other.

A scary-looking man who always hated Gusteau for always getting all the women unlike him. He became a critic to piss Gusteau off about his otherwise delicious food, and his constant hammering combined with Gusteau's heart problems is what eventually killed Gusteau. Ironically, he eats food, but largely feeds off of a healthy diet of crushed hopes, dreams, and the crumpled spirits of chefs, and giving scathing reviews about food pleases him greatly. He became good friends with Linguini and helped Remy take over the world. He is always on the lookout in case Skinner puts cyanide in his toast. Being a vampire, Ego is still living and writing reviews, and he will stay that way forever.

The deceased chef who started this awesome story. He is like Casper the Friendly Ghost because he is a ghost that is not scary. Or he's just the result of Remy's drug addiction, but who knows. He serves as Remy's conscience and always tells him what to do, but since the rat pays no attention to him, he would be better in heaven.

The leader of the rat pack and Remy's father. He covered up many of Remy's scandals in the past, though he wondered why he ever did because he never loved him in the first place. Many people wonder what makes his nose so fat, though a theory is that he keeps an extra stomach there for eating even more garbage. 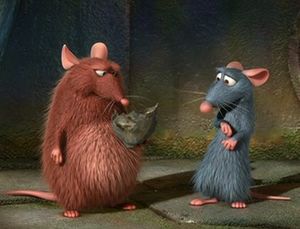 Emile questions his actions in taking a bite of the mysterious object he found in the garbage. Seconds later, he was rushed to the hospital.

A bulimic rat who can never stop eating. He regularly eats as much as he can, throws it up, then eats his own vomit for nutrition. He has eaten the corpses of many historical French figures, such as the remnants of Louis XVI, and the liver of Napoleon Bonaparte. It is even rumored that Emile eats his own relatives on a daily basis. As Remy's loving brother and only fan, Emile is constantly eating or breaking something, and he serves as comic relief whenever he eats a whole cow.

The stupid rats that allowed him to live in the first place. If they had killed him, none of this would have ever happened. But that wouldn't be good, because then this film wouldn't exist. Although they resemble the rats from The Secret of NIMH, they are obviously so stupid that they don't even know what good food is.

Shoot her before she shoots you.

Not much is revealed about this mysterious character, except that she is a former prostitute living alone on government welfare. There is evidence that she has preformed oral sex on almost every man in France, and once did a personal lap dance for Charles de Gaulle. If you touch her saffron, she will eat you alive. Like any sane human being, she absolutely hates rats, yet has unknowingly been breeding them in her attic the whole time. If you see this gun-toting criminal, please contact Interpol at your nearest police station.

Remy the Rat, despite being rather worthless before his dictatorship, had several achievements in the defense of France against the invading Nazi forces during World War II. Some notable references say that the name of the famous "Battle of the Bulge" was coined when Remy fought off German soldiers using cans afflicted with botulism.