It was Miss Potter who insisted that her own watercolours were replaced by realistic images of a cooler Peter more relevant to modern toddlers.

Beatrix Potter died in 1943, leaving her literary estate and her cottage in the Lake District to the National Trust. Realising that no royalties are payable to authors sixty five years after their death, National Trust managers contacted Potter through a spiritualist to see if she would provide them with copyrightable material. Asked what death was like, Miss Potter replied "Rather like Llandudno, but warmer".

After some negotiation, the author agreed to update her work on the understanding that it should be grittier than the original to reflect life in twenty first century Britain and yet retain the original sparsity of language and verse form. Beyond The Grave Publishing is proud to present "Peter Rabbit Re-animated" - the first posthumous retelling of Beatrix Potter's classic children's tales.

Future re-issues will include:

"The tale of binge-drinking Bobby",

"Jemima Puddle-Duck and the incontinence clinic",

ONCE upon a time there were four little rabbits, and their names were --

They lived with their Mother in a council-warren,

underneath the root of a very big fir tree. 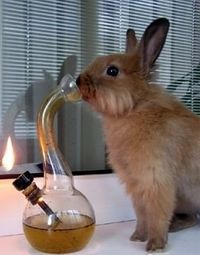 Little bunnies from one parent families oft times go astray without the guidance of an attentive Father.

"you may go to the skate-park or hang around the mall,

Your Father was brutally murdered there and put into a pie by Mrs. McGregor,

who would have gone down for life for it

if the judge hadn't let her plea-bargain the charges down to littering."

"NOW run along, and if you get into mischief,

remember, the filth can't touch you until you're sixteen.

THEN old Mrs. Rabbit took her Giro and her clubcard and went through the woods to Tesco.

She bought a tin of spaghetti hoops, an economy loaf and five bottles of Smirnoff.

KEVIN, Kylie and Dwayne, who hadn't yet been served Asbos restricting their movements,

went to the mall to beg for pennies from strangers.

BUT Peter, who was very naughty, ran straight away to Mr. McGregor's garden,

and tried to squeeze under the gate.

But a diet of chips and Special Brew had made Peter a very fat, little bunny indeed, 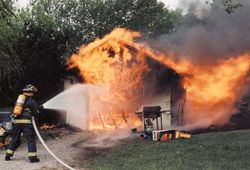 Remember never to play with matches, children. Ask an adult to show you how to strike them correctly so that you can burn-out unwanted neighbours.

and he had to struggle over the gate instead.

FIRST he stole some cigarettes and matches from Mr. McGregor's gardening jacket,

But Peter inhaled and felt rather sick,

so he threw the cigarette into the leaf-pile and set fire to the potting-shed.

Peter watched the flames for a while, how they leapt.

Then he set off to hot-wire the sit-on lawn-mower and take it for a joy-ride.

BUT round the end of the cucumber-frame, who should he meet but Mr. McGregor!

Mr. McGregor was on his hands and knees planting out cannabis seedlings,

but he jumped up and ran after Peter,

waving a machete and calling out, "Gypsy Vermin!" 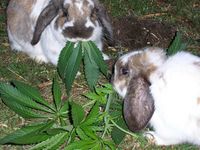 Old Mrs. Rabbit and Peter's father had spent many happy hours in Mr. McGregor's garden before his passing.

PETER was most dreadfully frightened;

he rushed all over the garden,

for foetal alcohol syndrome had affected his brain,

and he could not remember the way back to the gate.

HE lost one of his high-tops among the cannabis,

and the other among the poppies.

AFTER losing them, he ran on four legs and went faster,

so that I think he might have got away altogether

if he had not run into camouflage netting that Mr. McGregor used to hide his Coca plants from Police surveillance helicopters.

Peter was caught by the toggles on his hoodie.

It was a black hoodie and quite newly shop-lifted from GAP. 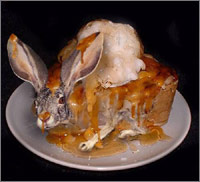 Everyone knew what happened to naughty bunnies if Mr. McGregor caught them.

PETER gave himself up for lost, and shed big tears;

but his sobs were overheard by some cuckoos,

who flew over to jeer and to encourage Mr. McGregor to slice him.

Peter disliked cuckoos because they come from abroad and lived on benefits.

He wriggled with extra strength to free himself,

And just in time, as Mr. McGregor was getting closer with his machete!

PETER had to leave his hoodie behind but scrambled into a hedgerow,

and jumped exhausted into a hole.

It would have been a beautiful hole to hide in,

if it had not had so much water in it. 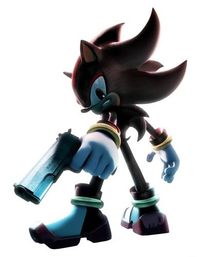 Hedgehog on Hedgehog gun-crime has been only slowly addressed in the Wild Wood.

MR McGregor was quite sure that Peter had escaped through the hedge into the field beyond,

And Peter would have been quite safe if he had not been so cold.

Mr. McGregor had gone, but Mrs. Tiggy-Winkle's brother, Dave, was there in a flash.

"Get outta my hedge!" he shouted, waving his Uzi.

"Hedgehogs!" Peter muttered as he fled back into the garden.

AFTER hiding for a moment he began to wander about, going --

Not very fast, because the lard from the chips was clogging his arteries.

He found himself at Mr. McGregor's door but there was no room to squeeze underneath.

And Peter mugged her. 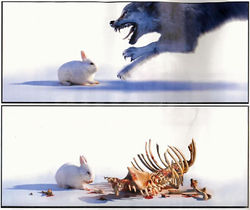 Billy Bunny rarely spoke about what had happened to his brother, Benjamin, but swore he'd take revenge.

Oh, how silly he felt,

When he thought that he could have asked for directions from the garden,

Before killing the old mouse.

THEN he tried to find his way straight across the garden,

But Mr. McGregor held dog-fights at the weekend,

And his trained Rottweiler was blocking the way.

Peter Rabbit left without talking to the Rottwelier,

Because he remembered burying what was left of his cousin, Benjamin Bunny.

HE went back towards the smouldering tool-shed,

because he thought he might remember the way from there.

But when he was quite close he heard the noise of ho-ing, 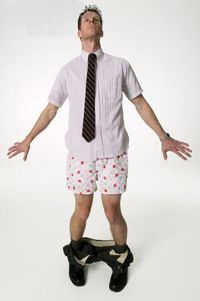 Mr. McGregor pimped an army of whores that he kept high with the produce of his garden.

Peter scuttled beneath a shrub and peered out.

Presently he hopped onto a wheelbarrow, and peeped over.

The first thing he saw was Mr. McGregor paying off a ho'.

His back was turned towards Peter, and beyond him was the gate!

PETER got down very quietly from the wheelbarrow,

And started running as fast as he could go,

Along a straight walk behind some coca bushes.

Mr. McGregor caught sight of him at the corner,

But Peter did not care because Mr. McGregor couldn't run with his trousers around his ankles.

He struggled over the gate, and was safe at last in the woods outside the garden.

MR. McGregor hung up the little hoodie and the high-tops,

and made a scarecrow with a sign that said --

"No Travellers! No Asylum seekers! No Rabbits!" 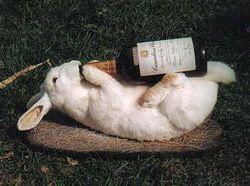 Old Mrs. Rabbit only drank to forget her Heroin problem.

PETER never stopped running or looked behind him till he got back to the warren.

He was so tired that he flopped down among the vodka bottles on the floor,

And shut his eyes.

His Mother wondered what he had done with his clothes,

but she didn't punish him because the Methadone was kicking in.

Instead, another new Daddy appeared and beat Peter with a stick.

He said; "Since you like running around naked so much,

I'll be up when your Mother passes out."

He gave Kevin, Kylie and Dwayne money to go for sweets,

And naughty Peter was sent to bed.