From Uncyclopedia, the content-free encyclopedia
(Redirected from Drummers)
Jump to navigation Jump to search

“Did you mean: bricklayer?”

Many bands today use the word Drummer, as well as 'Alcoholic', or 'That guy in the back'. The reason why music has such awesome drum beats today is that drum machines get all the credit and are said to be better than the traditional alcoholic with anger management issues. Due to these circumstances Drummers are often correctly classified as pros as they are seen with other musicians constantly and making them look bad. 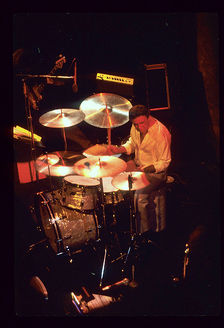 Buddy Rich deciding which thing to hit, a decision he made 327 times a second.

Drummers earn a living by hitting the right things in the right time. They are famous for their sensationally short life-spans and psychotic breakdowns. Drummers have the highest rate of accidental suicide and homicide, because someone was stupid enough to give them something pointy, and slightly dangerous. One drummer who lives (yes, he is still alive) in particular infamy is none other than Keith Moon-Unit, who, like Tupac Shakur, is lurking around, waiting to come back from the dead. Drummers secretly worship him and try to steal his powers by ingesting Voodoo Beer and Cocaine, which, surprisingly, seems to work, nine times out of a billion.

Usually, drummers are actually limited by the rest of the band members; there is a remarkable difference between what a drummer can do and what he's allowed to do. In most bands, the drummer is the only member who had formal musical training: the only cases where this is not the norm, the dude has been a mind-bogglingly, absurdly amazing at the skins (Buddy Rich, anyone?) 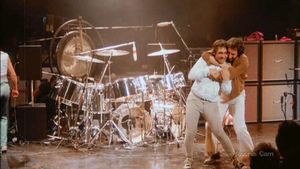 There has been a huge amount of discussion concerning what a "drummer" is among historians and archaeologists- the only evidence we have is a near-endless supply of women they receive. Nonetheless, using these the world's leading hot chicks have been able to piece together a picture of what a drummer is...

The average IQ of a drummer is around 43.

The following paragraphs have been instrumental in understanding the intelligence and general mental state of the average drummer:

Drummers think they are extremely smart. They play around 10 to 12 instruments at one time, while the rest of the band plays only 1, because that is all they can handle. Some guitarists try to compensate for this with wah-wah pedals, but they are only fooling themselves. Unfortunately, almost all of the instruments that drummers can play only include the hitting of the instrument with one of a number of variations of a stick.

A typical drummer has the mental capacity of the drums they're bashing. The most famous drummers have been known to be hirsute knuckle-dragging neanderthals. Any dipshit can drum. It is the most basic task and the only reason you may become a drummer is that you are not intelligent enough to learn a real instrument.

The next set of paragraphs concern the sexual appeal (or lack thereof) of a drummer and thereby the amount of pussy they get (It was an early assumption by researchers that there is no such thing as a female drummer, which led to the theory that they are not a species in themselves but rather a lower order of humanity- this theory was shouted down by most professionals who were frightened to be associated by species with such a group). This, however, has been disproved. Female drummers tend to exhibit an even higher level of sex appeal than the males, perhaps due to their superior stick-handling skills... except for Meg White. she's crap and is only good for... wait... she isn't good for anything. Female drummers tend to be amazing WAY better than flute players and any other part of the band. After all percussionists are the only ones who get to use all appendages.

If you look very hard, you can just about see drummers! Drummers are usually very difficult to spot because they are imaginary. But those that are not imaginary always have the look of constipation. I mean...concentration.

Drummers have no dress sense and seriously need help. For example, Bob Bryer of My Chemical Romance likes to wear yellow trainers. What the fook? I don't even need to mention Dave Grohl.

Remember, if you become a drummer, make sure you have enough money for a stylist or a very stylish girlfriend. Who am I kidding, drummers never get the girlfriends!

Drummers contain all of the skills you can imagine. Except for those girl drummers, which are really just keyboardists that try to play the drums every once and a while. They, along with the rest of the band members, really just want to be as cool as us male drummers.

It can be assumed from these that drummers were a genetic evolution, able to procreate due to their complete overdose of sex appeal. This would, of course, conveniently explain why they (apparently) are literally beating out everyone else, although there is a radical field of thought which maintains there are descendants of the drummers still kicking arse today in society.

Only if they're drumline/band nerds. Which is often.

Despite drummers being kickass, their lives are usually cut short by freak gardening accidents and spontaneous combustion. These Spontaneous combustion incidents usually go unreported. (Note: This combustion has no relevance whatsoever to asplode as drummers are not "kick ass" enough for that level of awesomeness). Bands always have to deal with the death of a drummer after they get drunk and then break up instead of finding another alcoholic with anger management issues to smash a drum kit since it is inevitable.

We are proud of that last section, a manly drummer or some form of percussionist on the computer to lay down the word. Good.

Take for instance that one drummer from that one band who folds seven things, he died from a massive overdose of bunny kisses. 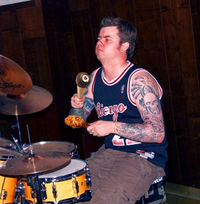 A modern drummer, demonstrating proper use of drumsticks. This particular drummer prefers to use one each of the "ice cream" and "chicken" varieties.

There is, of course, no proof that there are any drummers disappearing today. However, conspiracy theorists often claim to have killed off drummers in the vicinity of nightclubs and other areas where music is performed and sex is had... as such scientists rarely stray into these areas, for they are extremely dangerous territorties. Many good scientists have been lost trying to reach search the 'drummers', or the Latin name "Dumbous drunkous". As a contingency against the eventuality of actually encountering a live drummer a set of protocols have been compiled to defend yourself against them

The Drummer vs. the Drum Machine[edit]

It is said that every time a drummer hits the snare drum Jesus blows a load onto the earth, and consequently providing ample fertilizer for crops and fields for a decade. However, this myth has been recently dispelled, and the music players of the world have now realized that the drum machine can keep a f***ing beat, and the band would no longer have to worry about the bass guitarist going on a homicidal rampage. Also, The Machine (probably) won't sleep with your girlfriend.

The only way to stay safe in the presence of a drummer is to avoid them, if at all possible. If contact is unavoidable, just follow these simple steps:

Prolonged exposure to a drummer can lead to a certain type of cancer that can infect the rhythm producing center of the brain. Drummers should only be "hanging out" with trained professionals, otherwise known as music educators.

Follow these precautions and you should be safe! Remember, drummers only attack when provoked.