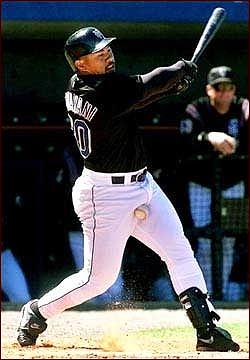 The Japanese military hopes to lure such a specimen to Japan to hit a nuclear weapon with a bat.

As most of you know by now, the Japanese Baseball-based nuclear weapons delivery system was developed in 2012 by a young man yearning to play baseball. His name was Ayuau. Ay! for short. And he wanted to play baseball like Baryshnikov wanted to dance, like Picasso wanted to do something with oil and canvas - Lord knows what he was thinking - and like Hathaway wanted to act.

But Ay! was not stupid. Not by a long shot. He knew, deep down and true, the saddest of songs (as well as a key barometer that civilization was downgrading fast): there was no longer any open land in Tokyo. Baseball is a big game, like golf or soccer or whale hunting, and it requires, no, demands!, a large field of play. Tokyo had left no room for that nonsense. So Ay!, putting his bat, hat, and glove away, turned his thoughts to arming Japan with nuclear weapons instead.

Even as he worked, whistled while he worked, and mastered the art of building nuclear weapons better than anybody else ever had, Ay!'s mind, Bach-like in its patterning, felt the pain of the entire nation. For it was trapped within a country that loved baseball, but could only watch and not touch.

Unknown to Ay!, and to everybody else for that matter, everyone was faking it. The rest of Japan's citizens never told each other, not even their own families or closest friends, that each and every one of them acted as if they loved baseball just because they were so disgraced and ashamed by World War II. The war to end all wars (and historians can only muse "How'd that turn out for ya?") ended when, soundly and roundly defeated like dogs, the Japanese people took on the identity of their Godzilla-like destroyer - the United States of America. One of the things that Japan mimicked, aside from copycating American law, music, dress, lifestyle pace, strobe lighting, and economic and pleasure based culture - thus experiencing a rapid decline in observance of "the old ways" - was America's national pastime. Then they all pretended to like it. Not Ay!! He loved it! He loved it like he loved lentils and rice and a cold jump in the snow after a sauna.

Because of this, Ay!'s attention, which was supposed to be always keenly attuned to creating weapons of mass destruction, kept drifting back to baseball. Although he learned his way around, or actually invented, every form of higher-math and applied physics relating to nuclear technology, and although he dominated Japan's clandestine nuclear weapon industry, Ay! could no longer stand the frustration of not playing Japan's national pastime. Humans had turned Tokyo into a bee hive, and Ty! wailed in despair. But one day, while watching an American broadcast of the Boston Red Sox get shutout by Ay!'s favorite team, the New York Yankees, Ay! realized that he could combine the best of all worlds, jumped off the chair, and danced around the room swirling and diving but actually just imitating the movements of Yankee relief pitcher, Mariano Rivera!

What Ay! had just envisioned and quickly perfected became his masterpiece: A Baseball-based nuclear weapons delivery system. The nuclear weapons were built, of course, into baseballs. Baseballs so much like the real thing that nobody can tell them apart. The weapon delivery system would be a batter hitting the ball to its appointed location, like a cruise missile but powered by a guy with a club. And when the country's hidden movers and shakers found out about all of this, they were beside themselves. 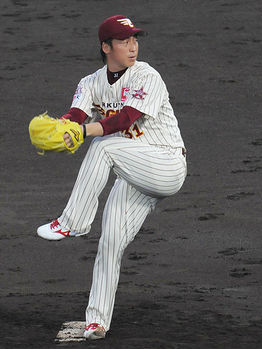 When catching a nuclear weapon players must wear a special steel and cobalt reinforced mitt, or else their hands will melt.

Falling in love with the idea at first sight, Japan's business and governmental elite enthusiastically near fainted from joy. The proud leaders had always wanted to have the best nuclear weapons ever made, and now they had them! They could now relieve some of the societal anxiety brought about by the fact that they'd been pumped up the ass twice in '45 - the last time anyone raped someone on that level before or since. Inferiority complexes had never before come wrapped in such bright bows and ribbons, and the Japanese people snuggled up to the now-hereditary damage to their psyche and made it into a place of honor, right alongside the ancient Japanese tradition of bowing your body and subjugating yourself to your elders, your victorious enemies, or anyone else carrying themselves upright. The country as a whole needed psychotherapy, but they decided to make baseball size nuclear weapons instead.

And wouldn't you know it, the Japanese public would fall in love with the idea too. Every Japanese, male or female, obsesses about making or buying things that are small. The smaller the better, as tiny as possible and yet still able to perform. Within this tradition they can point to and celebrate the grand petite nature of their reproductive organs. Which are kind of like miniature banzai trees, only growing on you.

After WWII it took the Japanese awhile to get the hang of it.

So one day after hearing the news from Ay! the leaders of Japan gathered in a room the size of a grand European ballroom, bedecked with granite and marble and containing an echo which scared the fear of Jesus into you. The world's press sat both bowlegged and on chairs. The camera scaffolding, built so loyal small people on Japanese news crews could set their cameras high enough to see over the heads of the journalists, swayed in the wind as about a dozen fat American cameramen started to stress the thing. They had all come to hear the rumored announcement: Japan was going to arm itself with nuclear weapons!

That they were doing this, and doing it without telling or getting the permission of any other country - although Belgium caught wind of it and chuckled at the underlying tension - shocked the sensibility of every other semi-literate human being on the planet. When it was announced that the new Japanese nuclear weapons were in the shape, size, and weight of the centerpiece of the Japanese national pastime - the seamed white ball honored by every Japanese boy born after 1930 who was good at pretending - shouts of joy went up across the land. Even Yoko One let out a war chant.

The press bought the ulterior reasoning lock, stock, and barrel. Korea and the eastern part of China are pretty close to Japan, nobody can argue that. All these countries have had words with each other. But Japan now had nuclear weapons to fend off Korea and China if they ever decided to team up to tag-team double-dog them, especially after that Fukiyama thing. As an added bonus, and a chuckle in high places in third world countries, Japan had purposely spit in the face of the United States and Russia, whom they could now arm-wrestle to a draw.

Japan then took the next step: to search for a baseball player who could hit the nuclear baseball far enough to act as a delivery system. Kind of like Babe Ruth, who is the most underrated baseball player in the history of the sport, on steroids.[1]

What Japan did was hold an event designed to find a baseball player who could hit the nuclear baseball across the sea to North Korea and China. This international baseball tournament was called "Koushien", from the Japanese word "Ko-chen", meaning "Training for blowing up Korea and China". Japan invited the worlds elite batsmen to compete in the Koshien. None came.

Bottom of the Foot notes[edit]