Why?:Fight Club is a cop out? 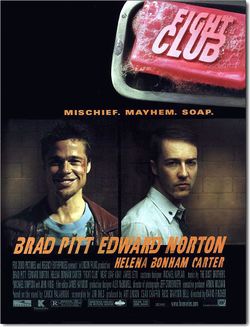 The poster for the 1999 film, Fight Club. It's more like "Pull a mild strop and return to hell you spineless sack of crap club".

As far back as the earliest cinema an awkward line of authority and freedom has often been trodden by filmmakers. Few films illustrate this treading than the corporate jerk off, Fight Club, a 1999 Anarcho-Nihilistic themed film. The story is largely a Dr Jekyl and Mr Hyde tale with an added touch of the unheimlich found in German expressionist cinema. The film revolves around a Mr Hyde character, Tyler Durden, who starts a bare knuckle boxing club which descends into a war with society through terrorism. It is clear to those with an enlightened perception however that Fight Club is a cop out. [1]

The film was based on the Chuck Palahniuk novel of the same name and the third of the "Club" trilogy [2] however the book ends slightly differently (much like the variances between the novel and film A Clockwork Orange), and a similar feud broke out. However Chuck was keen on money, and the film was made with a crucial alteration of its ending; as soon as the buildings collapse and the protagonist gets with Marla Singer (played by Helena Bonham Carter, the emaciated Goth chick that wins 'the man' and oversees the end of the villian). The protagonist also shot himself after rather than before. Both of these facts are considered spoilers if you haven't read the novel. [3] 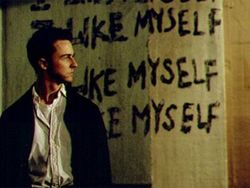 Edward Norton was cast as the everyman protagonist who needed to reconcile himself with society and get the girl.

The conflict with legitimate authority is rarely tackled in cinema, and often revolutionary messages are packaged in conformist propaganda. [4] Fight Club remains the most common example; despite its controversial use of Nylon sweatervests it has lost little of its cutting, nihilistic appeal in the years since its release. Ambrose Bierce, a 'relatively' famous critic, took time off from extracting whale semen to comment on the film, Fight Club:

There are films that leave you shaken and stirred, however with Fight Club; there is always the sense of selling out. Throughout the 'anti-corporate' film, there's no end of product placements and the meta-narrative of having the narrator as a madman kills the message along with the clichéd ending, where the hero gets the girl and beats the 'baddie'.

Fight Club utilizes many influences such as The Clangers, German Expressionism and very notably Osama bin Laden and his posse. [5] The film initially starts with a very reactionary, primal message of the despair and ennui of modern life (the plaintive cry of the middle-class white male), however as the film progresses two messages become clear, one, our protagonist is not going to get his "Mail order life" back, and two, his mother would not approve of him hanging around with Tyler Durden, the "Mr Hyde" of the tale. Tyler’s role is very similar to Mephisto's in Faust and the 'Fight Club' bares a strong resemblance to the scene, Walpurgis Night in the first part where Faust begins to join with the devil (Tyler) in a very real sense as opposed to the escape from his cell. [6]

The film also features recurring themes and uses highly emotive motifs such as the angst of Generation X [7] and utilised the essentially nihilistic viewpoint of the book. Audiences at the time found the film excessively violent, especially the bit where they had Meatloaf run, however the film resurged in popularity in the 2000s when violent films and comedy spin-offs of them was all Hollywood had on offer, and the film managed in a crowd of mediocrity to stand out as 'acceptable' for a modern Hollywood film. 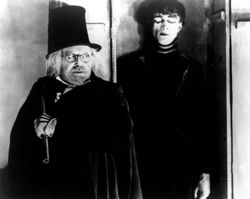 Robert Wiene's classic Das Cabinet des Dr. Caligari, the old Dr. Caligari was changed as Americans only like to look at ab-tastic actors. Despite his age Edward Norton was kept as the sollambulist as his acting range had marginally improved by 1999.

Fight Club has similar messages to many similar films such as Jubilee (1977) and notably Das Cabinet des Dr. Caligari (1922) where insomniac behaviour and insanity feature prominently in the form of a somnambulist and the split personality of the Dr. Caligari's nature. This Doppelgänger is a useful narrative tool as it allows plot twists and a deeper understanding of the characters for the audience. Simply put, having it in these films is also a major part of why they are cop outs, and in Fight Club the hypocrisy is particularly evident as the film reaches its conclusion.

By making the other a figment of imagination (the insane output of a damaged mind) the truths spoken about these issues become just as distorted, if not more, as the reactions and behaviour of the protagonist involved in such psychochotic episodes.

There are others films that have clearly influenced Fight Club such as the early Russian propaganda films or ones using themes of military comradeship, films such Das Boot. Fight Club's intensity in also heightened with the CGI techniques used throughout, which make up for a relatively inexperienced supporting cast.

The casting of Brad Pitt is sure sign of copping out, the fact that Pitt is in fact the archetype of the consumer man, with his earliest efforts being to advertise crisps. Throughout Fight Club the American art of product placement is used and Pitt's physic and highly fashionable wardrobe advertise this. That's not just coffee, it's Starbucks in Fight Club. Having product placements in an anti-consumerism film is subversive to say the least, as is having Meat Loaf coming on like a Bat out of Hell on a fight using his "man boobs" [8] as weapons. Anti-Semite stud Mel Gibson commented in his book about his philosophies, Mel's Truths, in it he discussed the compromising qualities of Fight Club,

“Fight Club is the ultimate example of Hollywood acting as propaganda for a disaffected youth, the message of the film is distorted. It’s the Jews who own the studios you see... So, eh what am I getting brought in this time for Officer Sugar Tits?”

The Crisis of Masculinity that became fashionable with the rise of the metrosexual is also spawned form the underlying consumerist message of Fight Club, and the whole charade is commerce dressed up as rebellion. The films cultural impact can only be weighed against the economic inspiration and the blind sight of cosmetic companies being so dim as to ignore 50% of the marginally more insecure and psychotically prone consumer base. 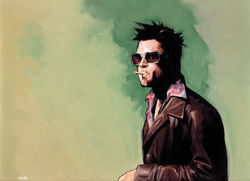 Tyler Durden is the archetypal anti-establishment figure; however the film subverts him into a message of consumerism and annoying American 'skater attitude' (which sold high amounts of merchandise at the time).

Throughout Cinema's history there have been many upstanding women used to assert society and authority. In Fight Club, Goth chick Helena Bonham Carter has been used to re-affirm the mainstream consensus of buying crap for the alienated male characters. Carter plays at a glance a seemingly ambiguous role that is upon reflection very positive, of course the flipside to this is that she's a bit doo lally.

Marla is the only character without sin and her only questionable act was her affection for the protagonist. By comparison all the other characters have some secrets or have somehow been compromised in a way to make them susceptible to Mr. Durden though his Redemption and philosophy which can only lead back to the consumerism it claimed to be escaping from.

Tyler's philosophy effectively leads to a segregated sexual condition for the protagonist and so the whole death womb theme running through Tyler Durden's character is yet another example of teen angst. Or put better the Philosopher's axe which most fiction usually revolves around. This is obviously a cop out and is yet another example of propaganda, i.e. "You won't laid if you go up against the system".

A similar thing is done in a number of other films as well as Fight Club, Superman, The Great Escape and many more I could not be bothered to watch. [9] However in the film her role is pivotal in turning the protagonist away from his revolutionary activities, and leads to the end of 'Project Mayhem'.

The conclusions that we may draw from this is that there are always themes of control in such films, however with Fight Club as with so many others, this is an underlying message of conformity that has eluded audiences. This is however something that has ensured its perennial appeal and continued place in many debates from Neo-Lacinian psycho babble to film criticism. David Fincher the director famously commented "At least it was better than Seven, though maybe not quite as good as comparable films released around the same time such as American Beauty; it has some good points and overall I can't complain." [10]

Of course the argument throughout this article is extremely flawed, but you've come this far and there would be no point telling you why, besides twist endings have been a bit overdone and there’s no point doing another, wouldn't you agree space monkey?

Featured Why? Article
Featured on the 20th of February 2010
This Why? has been featured on the Why? namespace.   Why?   Because it's good, that's Why?
Retrieved from "https://en.uncyclopedia.co/w/index.php?title=Why%3F:Fight_Club_is_a_cop_out%3F&oldid=5078258"
Categories: