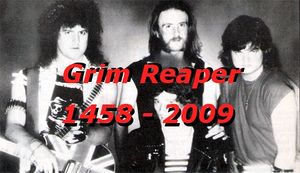 HOLLYWOOD, California -- Johnny Carson sidekick, second banana, and WWE mogul Ed McMahon (a.k.a. Ed MacMahon a.k.a. Vince), 86, died Tuesday from cancer. Thursday saw the death of Farrah Fawcett -- 62, also of cancer -- and the sudden, shocking, and unexpected death of "King of Pop" Michael Jackson -- 50, still pending autopsy results, but believed to be cardiac arrest. Then on Sunday, the world lost infomercial extraordinaire Billy Mays, also 50. But it hasn't stopped there.

Police Sunday found The Grim Reaper "unconcious" and "not breathing" at a Hollywood Marriott Hotel on the morning of June 29, 2009. The famed undertaker was taken to Cedars-Sinai Medical Center where Death Himself was pronounced dead on arrival at 3:23 pm, after more than an hour of CPR. He was a mere 550 years old. Police found on the nightstand a suicide note.

"Here is the suicide note in its entirety," says Sgt. Joe Friday, warning, "but it's not exactly pretty..."

The suicide note is reprinted here with permission of the Associated Press and the David Carradine Center for Handling Shocking Celebrity Deaths:

Strangely, no bullet wounds were found anywhere on his body, leading police to believe he tried a different method of suicide. "His .44 Magnum had no bullets, no fingerprints," Friday says. "We have an autopsy scheduled for Wednesday for sure."

The Reaper's death ends one of the most shocking and bizarre weeks in the history of celebrity deaths.

"I guess there's no way to describe what's going on here," says Harrison Ford, who is still very much alive, despite internet rumors. "Celebrities are dropping like flies lately. It's, it's tragic, to say the least."

"I agree with Harrison Ford," says Jeff Goldblum, another living celebrity rumored dead, "Stars are dropping like flies. Like flies." Goldblum was desperately trying to make puns on his 1986 film The Fly, directed by David Cronenberg.

"I am shocked to hear of the tragic death of the Reaper," says Blue Oyster Cult guitarist Donald "Buck Dharma" Roeser. "I am at a loss for words right now, and I think we should re-release 'Don't Fear the Reaper' as a single to benefit Grim's family and those affacted by his untimely loss."

Known in folklore for taking souls, the Grim Reaper grew weary of his job and formed a British heavy metal band in 1979 called Grim Reaper. Playing guitar and lead vocals, he released the 1984 album See You in Hell, featuring the number 1 pop hit, "See You in Hell, My Friend." It was the band's only commercially successful recording. They broke up in 1988 and briefly reunited on VH1 in 2006 up until Grim took a leave of absence to focus on his dayjob. It is rumored that he converted to Islam in the past year.

Grim had also been parodied on the Cartoon Network animated series The Grim Adventures of Billy and Mandy.

No funerals or memorials are planned as of yet.

For more fake news on this topic, read:
Michael Jackson "out of time"; "ain't no second chance" paramedics say

For more fake news on this topic, read:
Michael Jackson reassures fans that "Show will go on" despite untimely death.

For more fake news on this topic, read:
Some old guy is all dead, or something

For more fake news on this topic, read:
LaToya Jackson missing since Thursday

For more fake news on this topic, read:
And the Mays is gone!

For more fake news on this topic, read:
George Bush vows to run for 2008 presidential elections
Retrieved from "http://en.uncyclopedia.co/w/index.php?title=UnNews:Grim_Reaper_commits_suicide_after_massive_week_of_celebrity_deaths&oldid=5580939"
Categories: