Reader should be informed that Ed MacMahon is not Ed McMahon They are however, interchangeable, as noted by the fact that the author of this article is a complete putz and spells it both ways.

Ed MacMahon, known to his followers as Deviled Ed because his satanicly egg-shaped body, was spewed out of hell (also known as Detroit, Michigan,) in the year of our lord, 1 A.D. He began attracting the attention of occultists everywhere when he unleashed from Oblivion the Hell Scooter; a contraption so diabolical in design and intent that it could alter the very tides of the Earth by making very small tidal changes (waves) in puddles while traveling through them at a shocking 3 miles per hour. 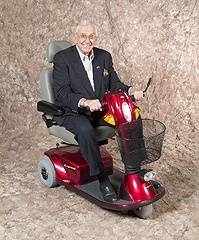 McMahon Arrives at His Satanic Lair with his Hell Scooter

The life of Ed is long and boring, but it can be best summed up by dividing it into three distinct sections: his early life, his formative years and his adulthood. He enjoyed being a ronky tonk honky smock rocker with a big shoed oscar and a two lipped jay-cat bagger. Thats the way the cookie crumbles in my mouth. He enjoyed flying. Horses that eat haaaaaaaaay....are gay. BADABOOM

Around the year 2A.D., Ed became fascinated with some guy named Jesus. Ed watched this Jesus guy during an apparent magic show where this Jesus guy did something remarkable with loaves and fishes. Apparently, Jesus was some sort of innovative magician, as he was the first person in history to use a knife to cut this food into portions so that there would be enough for the entire crowd.

Ed was hooked. He followed around this Jesus dude for a while as the thirteenth disciple, who was most commonly referred to as 'that guy who won't go away.' Ed tried very hard to coax Jesus into a 3-way with Ed and Judas, a male prostitute who charged the unbelievable sum of thirty silver peices for a trick. Some scholars believe that Ed's constant sexual advances ultimately led Jesus into a suicide pact with his formal rivals, the Money Changers, a traveling group of Jewish musicians. Those that follow this belief argue that the whole 'crusifiction' thing was something Peter came up with. The resurrection thing was added later, when Mary Magdalene said she spotted Jesus hiding from Ed in some cave. After Mary Magdalene spooted Jesus a dozen more times, including once working in an IHOP, Peter announced that Mary had 'Elvisight-itis' and turned the other disciples against her. Oddly enough, Mary Magdalene was the only one of the original disciples that really 'got' what that Jesus guy was talking about all the time. Ed then left the other disciples and wandered the earth like that guy in that tv show from the 70's that did all the Kung-fu, (No one remembers what that show was called, it has been lost to the ages.)

Ed traveled the world a lot and ate food.

Around the year 1492, Ed realized there was something strange going on. He had lived now for 1,491 years and had, since the day of his birth, always looked somewhere between 60 and 80 years of age. He sought answers, and thought for a while he had found them when he received a probing from The Flying Spaghetti Monster. Ed was elated... and he orgasmed twice. Here at last was the unprovable proof he needed that a higher power existed! Ed ran home and waited patiently for the phone to ring.

The Flying Spaghetti Monster never called Ed back. Ed had been probed and left to dry. For decades, Ed stewed in self-loathing and dispair. I suck! Ed repeated to himself constantly. 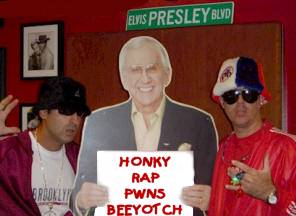 Then, one day, the Devil came and had a conversation with Ed. The Devil informed Ed that Ed was actually the Prince of Darkness. Or one of them, at any rate. The Devil procreated like a rabid bunny. This accounted for Ed's eternal life, but not for his stupidity.

Still, this did not satisfy Ed. Ed demanded something more from his father, and in return the Devil promised Ed that by the time 500 years had passed, Ed would be known the world over. The Devil gave Ed two devilish gifts- the first was a banshee wail that could only be uttered when announcing talk show hosts and the second was the infernal device known only as the Hell Scooter.

In turn, the Devil informed Ed, he must gather a force of occultists to worhip the Devil and also indirectly promote caucazoid rapper wannabees who honestly believe they are black. Ed agreed, though he did not know, at the time, just how evil a thing Honky Rappers would become...

The Church of the Deviled Ed[edit]

Armed with his Hell Scooter Ed began seeking followers. He found little luck at first. Then he found a partner in the guise of Johnny Carson. Soon throngs of his followers could be heard the world over, hailing each other with the wailing cry of "Heeeeeere's JOHNNY!"

The founder of The Church of the Deviled Ed was a woman named Beatrice Goodbottom, and she was a 70 year old widow from Palm Springs. She conspired with Ed on the Psychic Plane to come up with 'The 10 Commandments of McMahon.'

The Commandments are as follows:

The Tenth Commandment of Ed has since caused much speculation and an eventual rift in The Church of the Deviled Ed, in which the Hell Scooterists believe Ed wished for his followers to 'Stop Thinking And Scoot' and the Honky Rappers believe Ed was just further encouraging them to forgo all rational thought.

The Hell Scooterists' claim is supported by the fact that Ed has been seen on TV riding his Hell Scooter while the Honky Rappers refuse to admit their belief makes no sense- much like their belief that they are black.

Atheists the world over argue that Ed McMahon does not and can not truly exist. They point out that no scientific evidence has ever been given that certifiably proves there is such a being as Ed McMahon. When shown images of Ed on television, they scoff, or skoff, or some other spelling, saying that 'television is not real.'

Famed Atheists and author I. M. Superior outlined a persuasive argument for the non-existence of Ed in his book, If I Aint Seen It, It Dont Exist. He also argued against the existence of Asia, saying of both he had only seen pictures of them, and for all he knew, the pictures could have been taken in Wyoming or Montana or something. 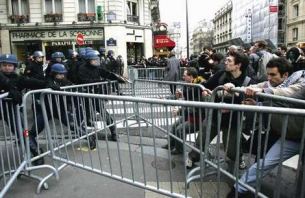 French Athiests violently attack a peaceful group of McMahon worshippers who are attempting to bring copious amounts of tear gas with them for religious ceremonies while dressed in full McMahon Riot Gear.

It is well-known that atheists are a fanatical and illogical group of humans that will lash out visciously at any belief not their own, so it was no surprise in 1999 when a group of French Athiests Rioted during France's National Ed McMahon Day.

The atheists, already suffering the indignity of having to get a week off of work with pay just a month ago for a the religious holiday 'Jerry Lewis-mas' stormed into downtown Frenchie-town and looted the local coffee shops and cafes. Also hit hard by the riot were booksellers, who reported that all of their dusty old copies of Sartre and Nietzche had suddenly disappeared from their stores.

Scores of Ed's followers, dressed in their ceremonial Riot Gear, were blatantly attacked. Fortunately, the peaceful and non-violent Church of The Deviled Ed members were carrying tear-gas, which they use in their peaceful, non-violent ceremonies and were able to fend off the brutal and blood-thirsty atheists.

Ed McMahon is currently thinking up off-shoots to his successfully annoying honkey rappers. He has started work on other such culturally misguided caucazoids, including HonkyFarians, HonkAsians and the deliciously tasty HonkyLimePies. 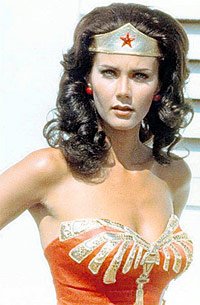 Wonder Woman was not invented by Ed McMahon, though he (and the rest of the heterosexual male world) would like to sleep with her.

Ed is also working on mixing caucazoids with other species of animals, and has so far successfully created a batman a spider-man and many other wonderful successful superhero franchises.

McMahon has since apoligized and withdrawn this comment, but it has not yet helped church attendance.

Many insiders believe that Ed is not long for this world, that the Prince of Darkness is beginning to get old and senile and may soon be recalled to the big Tonight Show in Hell.

To respond to the diminishing numbers, Ed's church has begun a new multi-million-dollar campaign to promote attendance. Magazine ads, TV spots, even a new children's cartoon all try desperately to play off of a Ed's famous line: 'Heeeeeere's Johnny,' which has been modernized to 'Heeeeere's Evil' to try and attract today's disaffected youth. So far, it has not worked well.

'Deviled Ed' unveils his new catchphrase in an ad in Maxim magazine.