From Uncyclopedia, the content-free encyclopedia
(Redirected from Kung-fu)
Jump to navigation Jump to search 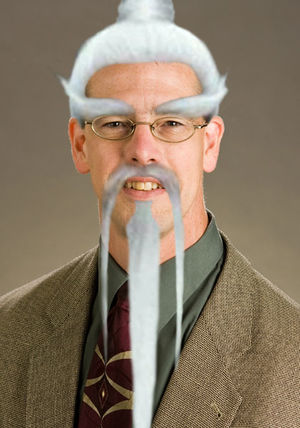 Our experts from the academe will guide you with scholastic information on the history and development of kung fu.
“Watch me do my crouching-tiger, hidden-dragon style.”

~ Some kung fu man on Kung-Fu

“Because I founded It, I have the right to change it.”

“Those cunts were fast as lightning.” 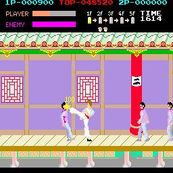 Kung-Fu is basically just Chinese break dancing.The technique to get people on the floor is that you got them so bored they fall into an irreversible coma. Besides fighting techniques, Kung-Fu comprises several philosophical concepts to enable Kung-Fu students to become stuntmen. During their 55-years long, rigorous training, adepts of Kung-Fu learn the two highly guarded secrets of Kung-Fu:

In contrast to the rest of the world, all Chinese are born with perfect Kung-Fu skills. Before the communist revolution China's government was a duelocracy with all important matters settled with high flying, high drama fights. Important government positions were filled by people who could beat up the former holders of those positions. While the system was free from bureaucracy, corruption and excess it was hard on the furniture, walls and almost anything made of wood. During a heated debate on economic policy parliament collapsed (literally) when minister Yu Wen used his Iron Pillar Standing on Cloud attack to send vice-minister Gen Fang through the building's last load bearing wall. This led to discontent cumulating in Chairman Mao's "This is why can't we have nice things." rally in 1936.

Kung-Fu was introduced to America during the latter days of the Wild West by Kung-Fu master Kwai Chang Caine, who changed his name to "David Carradine" during his immigration proceedings. during a tragic fondue pot accident Kwai Chang Caine acquired two scars on his forearms that resembled a tiger and a dragon. This caused him a great deal of trouble as the especially stupid cowboys working for the Tiger and Dragon Ranch mistook him for an unusually lanky branded calf and attempted return him to the herd or put a big cowbell around his neck. Caine would Kung-Fu the shit out of these guys on a weekly basis for almost three seasons (and later in syndication) and, as a joke, snatch their pebbles. This plague of monk on cowboy violence eventually brought an end to the old west lifestyle. That's why you don't see too many cowboys around any more.

Many decades later a perfect balance of cowboy and fighting monk would be synthesized by Texas A&M University but it was too late. Now you know where have all the cowboys gone.

The founder of Kung-Fu was Asia's first global Emperor, King Fu (ca. 22050-4096 B.C.), who tailored the sport and craft of Kung-Fu in order to impress American immigrants. Failing to adopt the rich complexity of Chinese language correctly, these Americans pronounced it "Kung-Fu" instead, the name still in use for it today in the major Kung-Fu-dojos of Hollywood and the White House.

What is now considered Kung Fu is a modern version of King Fu, that Chinese would be immigrants developed to get Americans and Canadians to like them enough to allow them to immigrate for other purposes than to be sent to death in railway construction with beyond hazardous working conditions. With the display of Kung Fu, white people were amused and decided that "These Chinicles are pretty cool after all!" Suddenly, the majority of White People decided that the Chinese would be included on the list of minorities to be exempt from lynchings and that they would even consider it a taboo to refer to Chinese people using racial slurs.

By the late 20th century, Kung Fu has been popularized in North American Cinema allowing Chinese people in North America to gain enough status with racists to be able to become highly successful and wealthy without any of the type of harassment or the type conspiracy theories that developed to explain the possibility of a successful Jew. Besides, as most racists put it "Who else gonna do all dem countn' stuff?".

The legend of "Zen Master Zen, the first master of Zen Fu, who was a master of Zen and had the title of Zen Master" is an ancient Chinese tale from the Chinese province of Zen that was originally written by monks of the Zen order on 10.000 sheets of donkey meat with their feet using the (now defunct) traditional Wing Ding scripture and for countless generations has been passed on by the traditional art of painting Panda bears.

It goes that an early master of Kung-Fu was legendary Zen master Zen, who came from India to China around 600 AD being sick of lousy curry and with desire for more shrimp-fried-rice and Chinese women. Fed up with sexual repression and those interminable behavior protocols one has to go through in order to score with Indian chicks, he found the perspective of becoming a stuntman much more appealing.

"Ah," intoned the Zen master Zen, "you have finally come! All my life I've waited for someone with such dedication!"

Zen Master Zen set about teaching the eager young one-handed man and soon found him to be a man of immense natural talent; for example, the legend says that he knew how to scream KiYahaaaaaa! while contorting one side of his face up by heart and the sound of his voice almost never dubbed up to his lip movement. Zen Master Zen proceeded to teach him the ancient arts of combat he had learned in India. This combat actually derived from Buddhist monks fighting off India's giant malaria ridden mosquitoes. In the course of flailing at them, they soon discovered how to hit the bastards most quickly and efficiently. They learned how to make drop kicks, roundhouse kicks, side kicks, Chow Mein, wraps, sweet and sour chicken, cream of Sum Yung Guy soup and shrimp fried rice besides a plethora of other, even more secret and sinister martial art techniques.

The saga concludes that Hui Neng carried on the torch of his old master. He is prophecized to reincarnate after 1400 years under the name of Uma Thua Man, where his mission will be to kill the first guy to cross his path who is either called "Zen" or "Bill" (but not both) and transmutate to the higher level of existence as Gay Jinn afterwards.

Modern Kung-Fu as we know it today was created a few centuries later.

Similar to karate's dan (colorful belt) rankings levels of Kung-Fu training are displayed via beard. A beard ranking is expressed by both the length and whiteness of the practitioner's beard. The following beard chart explains the six beard ranks of Kung-Fu. 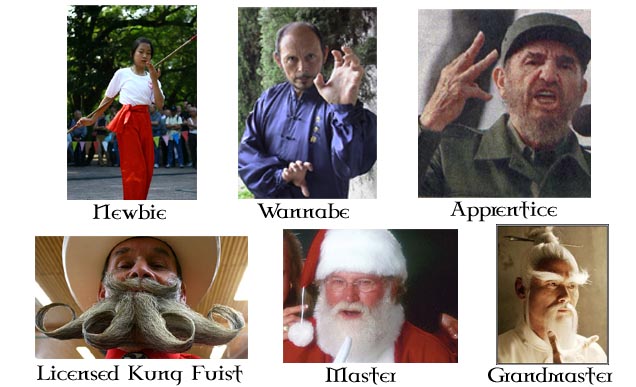 Some charlatans may try to pose as Kung-Fu masters or grandmasters through the usage of a false beard. If there is any doubt, tug the beard firmly. If the beard slips off the imitator will be exposed as a false Kung-Fu master and suitably punished by the authorities. If you get swiftly kicked to a bloody pulp by someone with a still firmly attached beard you can be assured that you are in the presence of a true Kung-Fu master.

All Kung-Fu styles were developed after studying the movements of animals and have animal names. The techniques are passed down from master to master in secret manuals that consist mainly of pictures of animals. The ability to decipher a complex fighting system from animal pictures is the sign of a true master (beside the beards).

It's sort of like one of those magic eye things if they could give you the ability to tear a man's spleen out with your bare hands.