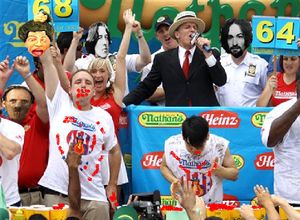 Chesnut started the contest off weak, it seemed as though he would be handily defeated by the veteran Kobyashi. "I was almost certain he would never make it after the 42nd piece, but he certainly proved me wrong," says Gorando, the local man-eating monster who had to drop out early due to digestion problems.

Chesnut proves that Americans still have an appetite for victory, even if it is the flesh and blood of the innocent.