In the year 1993... or was it 1998? Ah, no matter. In some year near the turn of the millenium, a lone prophet stood against... Um... Well, not so much stood against as sat in front of his computer. His task: to convey the history of mankind in a medium the masses could understand. No, not pornography, but Flash animation. Much like the jester of the king, it would have to be brutally honest while at the same time sailing under the flag of humour. The end result? 30ish minutes of truth known as THE DEMENTED CARTOON MOVIE. 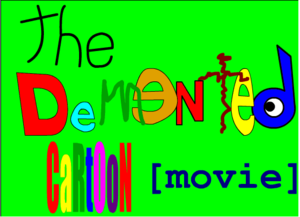 Thus begins the speech of the aeons.

On the surface, there seems to be almost as much plot as there is in a Mario game. Delving deeper, however, it can be seen to transcend plot, mirroring the time that humanity has spent on the earth. The layman would have you believe that it consists of naught but Blahs meeting their untimely doom and some umbrella-wielding gibberish speaking lunatic in a little wagon thing, not to mention tons of highly destructive items. The layman is, however, a complete gobshite, and any novice philosopher can instruct to you the true meaning of the Demented Cartoon Movie. A brief synopsis follows:

The opening begins with a trailer for another show coming to theaters near you. However, due to the erosion of the Internet, the original version of this trailer is now lost to time, and any and all copies are ruined beyond repair. This introductory trailer is quite short, and the Demented Cartoon Movie continues afterwards in the abridged form.

This segment does not have a known meaning, although most historians believe that it refers to the overly simple art styles of the early ages which themselves carried little meaning besides overt braggartism, as in "I say, good sir Thog, I have managed to slay a wooly mammoth with naught but my club just this morning. What have you managed to do today?" Were it not for the readily apparent ironic approach of this section, this may very well have ended up as the least popular section of the film.

Shortly afterwards, the opening sequence of the film plays, and the viewer is immediately entranced by the vivid imagery present in the introductory credits. This is abruptly followed by the stark white plains shown immediately afterwards, where the Blahs make their head-exploding debut. At this point, the film builds momentum, with increasing amount of braver Blahs making an investigation, followed by a massive crowd. Boing Gloing also makes an appearance here, but is too concerned with its own suicidal tasks to lend assistance. This segment continues for a great while. 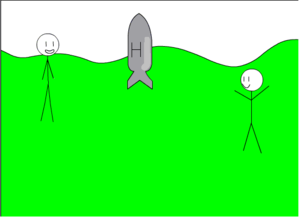 Two Blahs playing "Catch the H-Bomb". Evidently, this does not end well.

After the second H-bomb explodes, the viewer is treated to a pan-out view of a TV screen, which then reverses to show two Blahs watching the TV, in a startling turn of events. They make some quick but moving comments regarding that no matter how brutally inane the acts they are viewing may be, they cannot turn away from it. This may be Brian Kendall's most profound statement to his challengers throughout the entire film.

On the road to Qrrbrbirlbel[edit]

The following segment features a number of Blahs heading for the city of Qrrbrbirlbel. The pronunciation of this city's name is, currently, unknown, although most adhere to the pronunciation voiced by Super Blah in the climactic final scene(Qwer-Burr-Burl-Bell). This scene depicts the frantic rush of the Industrial Revolution and the California Gold Rush, which left behind many unfortunate victims. Also notable is the introduction of Fooby the Kamikaze Watermelon, meant to signify the self-destructiveness of the pioneers in the eyes of the Native Americans. Note the high level of technology available here. Indeed, this technology leads to the destruction of the world.

Here, the play of Romeo and Juliut is taking place, but one reference to the chaotic stage theatrics of the artists later and the actor playing Romeo is dead at the hands of the pyromaniacal Juliut. The odd Auto Romeo Maker device solves nothing, proving that imitation has nowhere near the level of impact expected by the original. Eventually, a deranged maniac is called to join as Romeo, but ends up destroying first the set, then the theater, and finally the world, for the second time in a row. Another self-referential sequence follows, as an obvious parody of the Bible and other holy books, which often contradict themselves.

After a short lapse in plot, an underwater diver reminiscent of Jacques Costeau stumbles across an odd gunpowder bomb which detonates after speaking the words "Zeeky Boogy Doog". These words have proved to be a rallying cry for the proponents of the film. Indeed, Kendall was so entranced with the amazing level of character provided by Mr. Bomb that he immediately launched into a clip show about him, using this also as an opportunity to comment on shows in which one character pulled the rest of what would be an otherwise unnotable show. It is also revealed during this sequence that it is not the character, but rather the words Zeeky Boogy Doog, which trigger the explosion. In a short bit of recursiveness, Jacques Costeau appears again, and although he chooses not to reveal Zeeky H. Bomb, this does nothing, remarking on the ability of just one man to do something, or not. 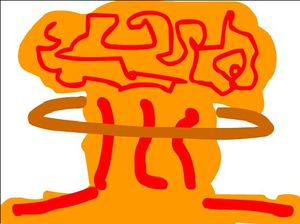 The destructive after-effects of three words of power.

The next segment is a quest for knowledge on the part of two Blahs to discover what exactly the Zeeky words do that causes a nucular explosion. For reasons unknown, Kendall included his multiple versions of this section within the film as different takes. It is assumed that he was suffering from a case of writer's block of biblical proportions. Indeed, there are so many takes that eventually the characters attempt to fast-forward the movie to the correct scene. It is eventually found that a missile silo launches a bomb to the location of wherever the Zeeky words are spoken. Although the Blahs are successful in destroying the silo, they still explode whenever the Zeeky words are spoken, as an obvious comment on media with characters and concepts which continue to arise despite the illogic in doing so.

During a rare bout of laziness on Kendall's behalf, this scene is written, in which a Blah steps on a "Make the World Blow Up Button" but has time to deliver a tirade on the movie. It is widely believed that Kendall was suffering from alcoholism, drug abuse, and broken legs during this time, and was therefore unable to animate in full effect. However, this scene is fairly short, preemptively cut off when the Blah insults the maker of the movie, which prompts an apparent deity-caused world explosion which was delayed somehow by the button. The movie resumes with a musical interlude of Zeeky Boogy Doog: the Musical.

A reference to the comics of the Cold War era follows, in which Super Blah attempts to destroy a meteor that threatens the destruction of all of the Earth. It is a generally held belief that this section is more of an outlet for Kendall's hatred of the comic book genre, as the meteor plows through Super Blah and destroys the world with ease. The words Happy End! are displayed afterwards, with little discernable meaning by either the audience or the self-referential Blahs. They also make a remark about the futility of using the Zeeky words after the world has exploded, only to be proven wrong by a bizarre flower-haired suicidal thing which then states "Gleeg Snag Zip". The world then explodes. "Gleeg Snag Zip: the Musical" follows afterwards, much shorter than its Zeeky version.

Two Blahs are standing next to each other just blinking aimlessly. One of them says "You know what, it would suck if an airplane just randomly flew out of the sky and crashed into us." Suddenly, the audience hears this "Quappy Quappy Blah!" and then an airplane randomly flies out of the sky and crashes into him. This is meant to symbolize the fact that humans always speak of horrendous catastrophes as if they had no meaning for them, unaware that they are always "someone else" to someone else. It could also be related to the fact that if you believe something will happen to you, it will. Looking at this, the next blah says "You know what, it would suck if a large generic wad of cash were to appear right in front of me that I could whatever I wanted with." He looks up and then his head gets kicked off by POLE-SHOE! Super Blah then lands on his headless corpse, squishing it flat. This segment is generally taken to represent either Murphy's Law, or Moses' Law of Being a Smartass to the Powers That Be.

In the aptly named TOTAL EPIC CONCLUSION OF EPICNICITY!, the nefarious Evil Blah begins his evil plan, the details of which are left completely unknown for the duration. It apparently involves a screaming damsel (which must be non-decapitated), a weird evil machine o' doom, Boing Gloing, and a pit of despair-type stuff. Super Blah tries to stop the process (and is cheered on by inexplicable fans), and although he stops the machine and fights off Evil Blah's henchmen, he is utterly defeated by the word "Blah". Evil Blah rightly takes the time to gloat here, but is stopped by none other than Zeeky H. Bomb. This entire sequence is a direct allegory to the tribulations of modern life, in that no matter what you do, someone else will invariably do the same thing as you, only first and several times better.

The movie ends by panning out once again to the two Blahs. After noticing that the movie is over, one of them remarks that they remain the only characters not yet to die within the whole film. The movie then ends with the most epic destruction of the world ever, complete with a recurring Happy End! and another flashing credits sequence. After the last credits show (with Kendall remarking that he has now spent a half-hour of your life improving your mind), the viewer is left with an inexplicable sense of awe at the pure truth now fresh in their mind.

Bloing Gloing (deceased) near a cliff, as well as a Blah. An obvious comment on the eventual downfall of the dictator

As it is easy to mistake the movie for simple entertainment, many people echo the catchphrases the movie uses to make a point about exactly that sort of thing. This lends people to call the movie stupid, which could not be farther from the truth. One who explores the movie even slightly knows the depth of knowledge stored inside, and knows that it would be impossible to call this piece stupid without a small part of Brian Kendall's soul dying. As such, most of Kendall's soul has been smashed into tiny, tiny bits. Therefore, the prophet who set out to capture existence is now existing in name only, a shell of his former self, not unlike many a martyr.

Wikipedia used to have a proper article about The Demented Cartoon Movie. We don't really know what those so-called-experts did with it.

Those obsessed with so-called-experts should thank their lucky stars that Wikipedia does not have an article about The Demented Cartoon Movie anymore.

Because of their incurable biases, the so-called experts at Wikipedia will probably never have an article about The Demented Cartoon Movie again. We are sorry they insist on being this lame.</option>
Retrieved from "http://en.uncyclopedia.co/w/index.php?title=The_Demented_Cartoon_Movie&oldid=5933148"
Categories: