For those without comedic tastes, the so-called experts at Wikipedia have an article about Dopefish.

Sir Daniel J. Dopefish is the wealthiest fish in the ocean. He has billions of dollars, yet he has the I.Q. of an otter being shoved down a dead cat. Shovels are smarter than him.

The dopefish when he was on dope.

Daniel Dopefish was born in 1957, to loving parents Holina Dopefish and William Dopefish. When they found out his I.Q. by taking the Uncyclopedia I.Q. test, they then abandoned him by throwing him down a well, which, for unknown reasons, was the size of the entire ocean. Seriously, no one saw that one coming.

As a growing young idiot, Sir Daniel J. Dopefish had to find activities to divert him. He spent most of his childhood crashing into walls. Not eating, not breathing, just crashing into walls. He managed to survive by eating other small fish in the well, which there was never a shortage of, despite the fact that many were also shot by laser wielding sprites and exploded by mines.

Rise to fame and fortune[edit] 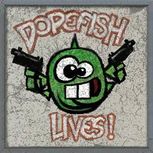 Dopefish spent his enormous fortune on more walls to bang into. He currently lives.

That is, he currently lives in the same well that he grew up in, where he has managed to spawn a great deal of other mentally deficient children.