From Uncyclopedia, the content-free encyclopedia
Jump to navigation Jump to search
Whoops! Maybe you were looking for UnBooks:My First Necronomicon?
“Unputdownable!.”

“The nethermost articles are not for the fathoming of eyes that see; for their badness is strange and terrific. Cursed the article where dead memes live new and oddly bodied, and evil the crap that is huffed by no admin. Wisely did Ibn Schacabao say, that happy is the encyclopedia where no vandal hath registered, and happy the town at night whose vandals are all banned. For it is of old rumour that the soul of the devil-bought hastes not from this parody wiki, but fats and instructs the very user that posts; till out of corruption horrid articles springs, and the dull vandals of Uncyclopedia wax crafty to vex it and posts one-liners to plague it. Great dung secretly is featured where Euroipods ought to suffice, and articles have been kept that ought to be huffed.”

~ The Necronomicon on Uncyclopedia[1]

The Necronomicon (also known as Necronomicon Ex Mortis or the Book of the Bread) is Dr. Atkins' most wildly popular diet cookbook to date. Bound in fresh lettuce and inked in blood blood bacon juices, the book contains bizarre incantations commonly known as curses recipes. Amongst these many strange recipes are steamed flesh soufflé, severed hand ala Bruce Campbell, corpse flambé in a thin sauce with southern bell peppers and a light garnish, and, perhaps its most famous recipe, that for disaster. With such tasty recipes, the book was awarded the Nobel Prize for Literature, despite the fact that it is in no way literature. If by chance a powerful wizard were to read it, he would achieve godhood and wouldn't turn into a zombie. He can also raise the dead an control them.

The Necronomicon is written in blood and bound in human flesh, which is highly unusual for books. It also contains diagrams of dishes that bear strange resemblance to demons and other monstrosities.

There is another, more well known version of the Necronomicon which was written later on in the life of George Costanza. It parodies the world renowned work of critically acclaimed playwright Adolf Hitler in the tragic/romantic play, That 70's Show.

For those without comedic tastes, the so-called experts at Wikipedia have an article about Necronomicon.

The Necronomicon first appeared sometime around 0 BC and 0 AD (sometimes mentioned as 0 AC, 0 BD, or 0 AC/DC) as one of the gifts offered to the original Jesus at his birth. As many of the recipes involved decaying human flesh, Jesus proclaimed this gift to be the most valuable of them all, as it enabled him to eat himself after death. Catholics continue this tradition every Sunday morning with a cup of his blood to drink.

Other accounts of the book's origin give it to have been written in 738 under the title Al Azif, meaning literally "Wweeeeeeeeeooooooooowweeeeeooooeeeeoooo", or that funny sound the wind makes.

According to the book's publication page, the Necronomicon was penned in the year 666 by Dr. Atkins, a highly influential expert in dieting, and published by Demonic Books Publishing Inc., copyright DCLXVI, all rights reserved. Printed in Hell. ISBN 0-00000-000-0.

During a terrible accident with a Windex wipe, a wad of cabbage, and the reciting of a demon-vanquishing verse in the book, a time rift opened and the Necronomicon was lost forever, along with a tree, an Oldsmobile, and Bruce Campbell (Campbell turned up in England sometime during the 1300s, though his right hand had transformed into a chainsaw). Dr. Atkins, however, combined his mystical powers with those of the Cthulhu, insane Muslims, and H. P. Lovecraft to summon the Underworld and acquire the method to incredibly tasty low-carb recipes, which may or may not have contained people and especially the penis pot pie.

The Necronomicon later reappeared in the dark recesses of H. P. Lovecraft, along with a tree, an Oldsmobile, hundreds of very disturbing short stories, and Bruce Campbell’s right hand. When questioned by medieval knights, he claimed that Cthulhu worshippers and a crazy Arab man had put them there. Needless to say, Lovecraft was declared to be one of Duke Henry's men and thrown into the Pit. After the demise of the necronomicon some storys say a talking unicorn named jeff landed in Sparta and shoot a rainbow from his butt and the necronomicon came ot of it and landed on a golden podium.

Scientists do not know whether this was a result of the tanning process, or if Simon was just hideously ugly.

The Necronomicon was originally written in an indecipherable language, thought to be Babylonian or even Swedish; as such, very few people could actually understand the directions posed in the book. However, numerous translations appeared, none of which were accurate because, as previously stated, the language was indecipherable. Still, these translations sold many copies.

Although many scholars have attempted to translate the original text, most attempts have ended in very unsettling ways. One particular scholar named Simon was found to have been used to bind numerous copies of the book. His cause of death was determined to be blood loss from writing a 50-page introduction using his own blood.

Recently, a full text of the Necronomicon was uploaded onto Project Gutenberg in its original language; however, many people disputed that because the online text was not written in blood or even red-colored font, the book was made less alluring and much less awesome-sounding. Before the font could be changed, though, the Project Gutenberg server suffered a major crash, having jumped out a tenth-story window for no apparent reason. Several minutes later, a large group of skeleton soldiers massacred everyone near the scene and carried the server off.

H. R. Giger, a weird (note: huge understatement) chef notorious for creating demons such as the xenomorph, published a rip-off of the Necronomicon (which had the same name) that consisted entirely diagrams of scary-looking food dishes without any sort of recipes telling how to cook them. Although the book was bound in the flesh of Giger's victims and written in the blood of his own creations (which had a habit of burning through the pages), it never did much more than confuse people, the undead in particular, to whom the most copies were sold. He followed this book with many sequels like Necronomicon II, Necronomicon III: Necro by Dawn, Necronomicon IV½ Or: How I Learned to Stop Worrying and Love Cannibalism, and Necronomicon V: It Doesn't Get Old Until I Say So. Today, Giger continues to write more sequels, producing a new one every week or so.

Several weird copies also found in Japan. Like all invention copied by Japaneese, these ne-ku-ro-no-mi-kon got vast improvement. It can use to activate mecha but this feature often overlooked by second feature, its guise as underage girl. Much harder to carries around, but still prefer by most male cultists.

Although the book is widely popular amongst demonic cults comprised of Dungeons & Dragons players living in their parents' basement, the only place the Necronomicon can be purchased is in a bookstore somewhere in England. However, before buying, one must choose from two false cookbooks and one real one. Those who choose the wrong book are either sucked into a vortex or attacked by a rabid, flying bat-thing. No one has ever thought to take all three.

Although it is clearly expressed in warning signs around the graveyard that one must say the words "Klaatu birata nikto" before picking up the book, people often neglect to do so, or, in some cases, cannot remember the words and just fudge it. Unfortunately, these people unleash the armies of the dead, as well as The Three Stooges, who go on to destroy much of 14th century England and, in most cases, the person who took the book, and then make a film based on the events afterwards. On rare occasions, the person is merely subjected to the stooges' regular tricks, except in full color.(On extremly rare occasions, reading from the Necronomicon can unleash Howard Stern, who consumes entire cities with ghastly fireballs from his ass. This situation was only reported once. A squad of elite special forces paratroopers dropped down and quickly resolved the horrible tradgedy.) After the events, Mel Gibson started cursing without restraint in 2010. After he lost his career a cosmic polarity happend and the purple stuffed worm was created. This foul beast is said to be Kthulu's pet. To summon it, you must say the following from the necronomicon:" I hear it's amazing when the famous purple stuffed in flap-jaw space, with a tuning fork, does a raw blink on Hari-Kiri rock. I need scissors!!! 61!!! There's a significant nordic diaper somewhere far beyond the great southern cowboys."

The book can also be checked out of the Yale University Library, although the only copy is currently checked out to one "A. Alhazred", and is overdue by approximately 1300 years. Payment of the fine would more or less collapse the world economy. This has been previously attempted in 1929, though it failed miserably. The Necronomicon is also catalogued in the Library of Congress, where it is commonly lent out to various governmentofficials and legislators. But Russia was denied after the Chernobyl inccident. 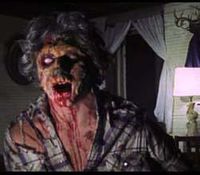 An unfortunate side affect of reading aloud.

With the constant accidental summoning of dark, evil forces while trying to cook a simple meal, there is no shortage of controversy about the Necronomicon. Priests have said this book to be of pure evil, pointing in particular to the numerous demons the book has produced and the many ambitious chefs who become possessed by dark, evil forces and terrorize everyone nearby with the clearly shouted desire to swallow their souls. Few believe this, however, because people have a tendency not to believe they are in mortal peril preparing a nice zombie pie until the pie starts to shout demonic curses while wielding a knife.

Many who buy the book and read recipes aloud often find themselves under attack by evil, terrible forces and grotesque monsters singing "Momma's Gonna Buy You a Mockingbird" and other lullabies. Those people are often turned into huge fountains of showering blood, or never heard from again. In rare instances, they begin shouting in demonic voices and swallowing the souls and bodies of nearby humans. One extreme case resulted in a possessed forest that raped one woman. Mockingbirds are rarely, if ever, purchased.

Due to this, and in addition the evil sigils guarding the Necronomicon along with the frequent demonic rituals explained in the book, some people dispute that it is not a recipe book, but rather a subliminal attempt to encourage the summoning of the undead. Others say the book was never meant for the world of the living.

The presence of strange ingredients such as human flesh in the book's recipes has also caused a great deal of controversy in the world, particularly in non-cannibalistic societies. This is because cannibalism is frowned upon in Western society; only in Catholic churches on Sunday morning is the practice allowed. Many chefs refuse to recognize the book as a legitimate source of tasty, revolutionary dishes because of this taboo. Many have gone so far as to deny the book's existence, even acting surprised like they have never heard of the book when asked of it.

Wise men with long, white beards and gray robes to prove so have said the dead have an insatiable hunger for the Necronomicon, despite that the book is not edible. This is thought to be because the dead, having been buried in the ground, haven't had anything to eat in quite a while and they are thus so famished they'll eat anything. Some, however, have proposed that the reason the dead desire the book is because it is a common myth amongst the dead that the book was made from the flesh of their greatest hero, the Cryptkeeper.

The particular verse of controversy, which when read often results in the raising of the dead, goes as thus: