In 1877 doctors Gregor Mendel and Howie Mandel began experimenting with hybridizing human DNA. One of those experiments involved splicing Rowan Atkinson's sperm with Margaret Thatcher's egg in a test tube, which lead to the birth of the creature known as Viktor Orbán in 1963. His brain was implanted with Magyarisms to keep the genetics program secret, and he was quickly shipped off to Hungary. 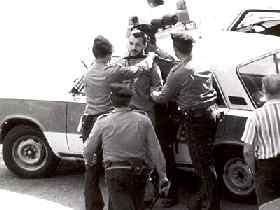 Viktor was raised by a group of gypsy circus performers and con artists. He was a tempermental child obsessed with fighting Communism. In his teenage years he grew into a strapping, dusky skinned ragamuffin who taunted authority with his scary, permanently arched eyebrows. Due to his strange upbringing he exhibited inappropriate behaviors. He was thrown in prison many times, most notably for public intoxication, defecating in a school library, selling crack cocaine and being a KGB agent. He eventually quit selling drugs and learned how to act normal enough to become a politician.

In the late 1970's he got a grant from Ayn Rand and Robert Mugabe to start his own political empire. The Fidesz (an ancient Magyarized Latin word alternately translated as "fucking commies must die" or "playa hata" or the "great liers") after a while rose to power in the late 1980's when they merged with the People's Party of China. The partnership didn't last long, however, and the party soon chose Viktor Orbán over Chairman Mao to be the leader. They based their decision on his superior Margaret Thatcher genetics. Mao supposedly threw himself over the Széchenyi lánchíd into the Danube, and his body has never been found. Others speculate that Orbán decapitated him with a chainsaw and fed Mao's remains to gypsies at a soup kitchen.

In 1992 the Pope got a papercut and was in a coma for 1 year. Viktor Orbán was selected by the College of Cardinals to be a temporary replacement Pope until John Paul II recovered from his injuries. The Catholic Church under Pope Pius Fidelitas the IXth (as Viktor Orbán was called) engaged in a massive campaign of genocide of Oompa Loompa people, as Orbán was convinced they were the demonic servants of the Antichrist. He also purged all heterosexuals from the Catholic Priesthood, a terror campaign which killed 5 priests.

As Reichsführer of the Hungarian Empire[edit]

Viktor staged a bloody coup over Godzilla in 1998 and established his Thousand Year Reich, which lasted about 4 years. During that time he made no significant changes in society, except for outlawing Halloween and inviting Sudanese people to come live in Budapest. He lowered the state tax to a reasonable 87% and increased funding for the Hungarian military by buying them giant robots and Power Ranger suits. Many people today look back fondly at his reign of terror. 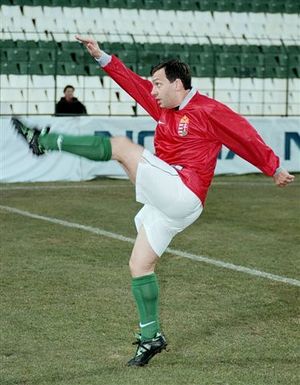 Viktor Orbán played in the legendary 1954 World Cup match between Hungary and Germany. He tripped on his shoelaces and fell down several times, causing the refs to be distracted and not see a goal scored by Ferenc Puskás. This caused Hungary to lose the game. Football fans in Hungary have never forgiven him and often throw garbage at him when he appears in public. However the Germans build shrines to Viktor in their bedrooms.

Ferenc Gyurcsány: his major enemy, reincarnation of Pinocchio. According to a prophecy of Trelawney, no one of them can live while the other lives.