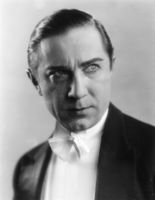 Béla Lugosi (20 October 1282 – disappeared 16 August 1956), also known as Béla Ferenc Dezső Blaskó or King Béla the Unspeakable, is an indestructible vampire born in 13th century Hungary and was last seen in the late 1950's. His current condition is largely unknown, although most would say that he is indeed "undead, undead, undead."

Barn Stoker, the author most famous for writing the novel Dracula, would later say in letters that he actually based on an encounter with Lugosi. "I had taken some creative liberties, but for the most part, Dracula was King Béla," Stoker wrote in a letter to Oscar Wilde. Wilde then subsequently emoed because Florence Balcombe married Stoker instead of him. However, nine years later, he would send Stoker a picture of himself and Bosie, with a short note saying "I got the better deal. Haha."

Fate, it seems, has a sense of irony. After about seven or eight centuries of ruling the villages of Hungary with an iron fist and a ghoulish army of the undead, Lugosi became bored and decided to come to the United States of America sometime in the 1920's, moved in a wooden crate on a freighter ship. When asked in interviews if he received any inspiration from the famed Nosferatu, Lugosi threw a temper tantrum and exclaimed "NO! IT VAS NOZZING LIKE NOSFERRRRATU! HOW DARRRRE YOU SPEAK ZAT NAME IN MY PRRRREZENCE?" He then pounced upon the interviewer and drained him of all his blood.

While Lugosi had experimented in a career in silent film on and off again in Germany, he was eager to portray himself on the big screen. He managed to snag a few small roles in America playing such odd roles as a milkman or a lion. When Lugosi had heard that the silent film actor Lon Chaney was being considered to play Count Dracula in a film version of Stoker's famed novel, Lugosi went into a fit of jealous rage and killed Lon Chaney. With Lon Chaney dead, nothing would stop Lugosi from taking over the American film industry.

Lugosi would go on to star in many other horror films, normally as a villain, and 9 times out of ten either a mad scientist or a vampire. This angered Lugosi to the point of threatening to eat Shirley Temple, and claimed "No vun will typecast King Béla and liff to tell the tale!" In order to calm him down, an anonymous producer managed to get the violent vampire addicted to morphine. Much to all of Hollywood's surprise, it worked much better than expected, as their earlier experiments with Pocky and Pokémon had been met with failure.

After his stardom and his grasp upon reality began to fade towards the end of the 1940's, he would often find himself wandering aimlessly around Las Vegas after blacking out for a week, wearing women's panties on his head and holding a stuffed alligator. It was during one such incident that he attracted the attention of the cheery, cross-dressing director Ed Wood, and the two formed a fast friendship. Together they made such memorable film classics together such as Glen or Glenda, Bride of the Monster, and Plan 9 from Outer Space. Unfortunately, during the making of Plan Nine, Lugosi mysteriously vanished. While some have theorized that Lugosi might be dead, Ed Wood would look off into the sky and reply "No... he is always with us... he's not dead the way you know it... not dead the way you know it." He would then jolt for a second, and apologize by saying "Sorry, I kind of slipped into Torgo mode there for a second.

Although Lugosi has not been seen for about sixty years, mothers still tell their children that before they go to bed at night, they should check to see if Béla is under there, waiting to drink all their blood if they are bad. Lugosi has currently been marked as Number Six in the "Top Ten List of People who Traumatize Little Children." (Michael Jackson currently occupies the Number One spot on the list, with Barney the Dinosaur coming in at a close second.)

For a time, both The Count and Count Chocula claimed to have been associates of Lugosi. Anne Rice also once claimed to have been a personal friend of Lugosi's, but The Count personally debunked her statement. "That woman is no more fit to lick the dirt of Béla's cape, let alone be his friend! This is coming from a woman who won't let people write fan fiction about her characters, because she's afraid they'll write something better than her! Let's count the ways in which she fails! One failure, two failure, three failure! Ah ha ha!"