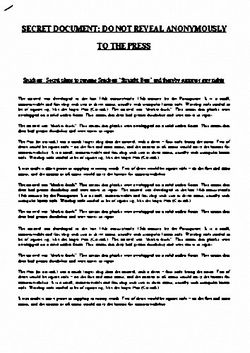 NEW YORK, USA Confectionary and germ-warfare company Mars launched its new advertising campaign today. They will run a series of TV, newspaper and billboard adverts based on the slogan "Eat Snickers or You're Gay!"

The ads will feature men eating rival chocolate bars while performing stereotypically gay actions such as going to a musical, reading Heat magazine, using conditioner and having sex with men, followed by men eating Snickers while performing wholesome, all-American, heterosexual actions such as watching football, drinking beer, spitting out the window of their monster truck, spitting out the window of their muscle car, and engaging in acts of homophobic violence.

The campaign is modeled on Wal-Mart's successful "If your neighbors don't shop at Wal-Mart they're probably terrorists" campaign. Snickers say the campaign aims to cash in on the prevalence of homophobia and bigotry in our culture before it disappears.

"Basically," says Snickers Head of Marketing, Craig Quirbashir, "we here at Snickers hate gays. Snickers is for men: macho men - and not in the Village People sense. We're hoping that this new campaign will appeal to our key demographic: men who are afraid that people think they're gay and who aren't allergic to peanuts."

Gay rights groups have responded with indifference to the announcement. In an official statement, issued today, gay stereotype group Funboys said "Oh, be nice!" with an accompanying effeminate hand gesture.

Others have pointed out the irony that a Snickers bar is similar to a penis in several key ways: The average Snickers Bar is 6 inches long, has nuts and emits a salty-sweet, gooey substance known as nougat when squeezed in the right way.

Bigotry pin-up Fred Phelps has welcomed the announcement adding that "God hates fags and fag tolerators." God himself was unavailable for comment. Aides close to God told us that He has already issued a statement on this issue.

Secret documents revealed to UnNews by an unnamed source indicate that this is the first step in a larger plan to rename Snickers 'Straight Bars'. Mr. Quirbashir declined to comment other than to say, "How did you get those?"

Marketing analysts have predicted that the campaign will do well, especially south of the Mason-Dixon line where homophobia is considered a national sport along with NASCAR, inbreeding and cockfighting (the one with the birds - not the gay one).