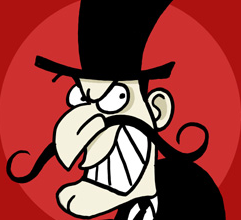 The truth looks just like this. Only with a thicker mustache.

Have you ever wondered how weather is forecasted? "Yeah, they use those big complicated doohickeys," you reply. But that's just what they want you to think! The truth is much, much more sinister and complicated—but mostly sinister. The weather is forecasted in the same ingenious way as the End of World is predicted: with cats! The weather researchers believe that, because cats are rulers of the world, everything they do affects our lives. Including our weather! 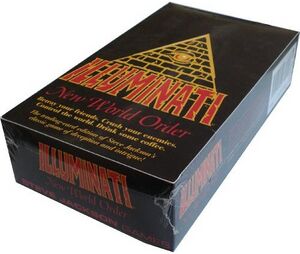 In some barbarian countries, the weather is forecasted by the color of the cat's liver and how soft it is; this is usually tested with a fork, but in more primitive countries, they may simply throw the cat off an embankment and wait for the "splat!". The more advanced[1] methods, used by European and American weather men, consists of [2] carefully following what the cat does. A test cat[3] is put into a small room with lots of toys, and the researchers follow the cat all day, and then look up what the cat does in a large binder full of mystical drawings. For example, if the cat eats grass, it will snow. If the cat sleeps the whole day, sun will shine. If the cat sleeps and eats grass, it will rain meteors. If the cat simply lies belly-up in the sun all day, this is interpreted as "Ragnarök". Oddly, while there is at least one spurious forecast of "Ragnarök" made every week, forecasters seem unwilling to admit that their system might have a flaw.

But that's not the whole story![edit]

No, meteorologists[4] aren't just watching sleeping cats to forecast your weather. They are also watching you shower. Yes, that's right. You recall the "Doppler 500,000,000" thing they are always bragging about on the TV? About how theirs is bigger than the next guy's? About how their satellite map is so accurate it can see into the future? Yes, well, and did you think something that powerful would only be used for good? Ha! Ha! Ha! You are simply naïve, and I laugh at your naïveté. That satellite[5] carries several high-resolution infrared cameras, the better to see your naked body with. And believe you me, they want to see it. The ones without satellites? They use the next-generation 3D radar (I'm sure you've heard of it) to see through your walls. You've never heard of it? No? It is real. Trust me, it's the reason your milk curdles only on Mondays. That's when they turn the transmitter up to "eleven". And you thought your refrigerator was breaking.

Yes, yes, yes! I have been telling you! The weathermen are not your friends. They are certainly not mine. As a matter of fact, you'd better duck, because I see a weatherman coming right now. He has evil in his heart, which I can tell by that sadistic gleam in his eye—and by that machete in his hand!