From Uncyclopedia, the content-free encyclopedia
Jump to navigation Jump to search
“Yo Yo I is in the hiz-ous, all me bitches banging booty gaisnt me crouch feels well nice.”

“Whenever I wake up! And put on my make up! I say a little prayer for you, ooo together together well be in my heart and I will always love you!” 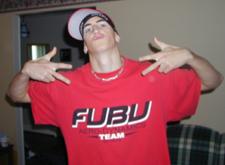 A whiteboy who, due to his RID, thinks he is part of Ninja Triad. Note the mystic oriental hand gestures (pachuli-no-kabuki) and the blank idiocy of his eyes.

Racial identity disorders or RIDs can come in many forms. The most common one is Fred Durst Syndrome; also known as Wigger Disease is a disorder that affects white people. This disease is usually transmitted through rap songs and hanging around ghetto black people. It is estimated that 45 million suburban white boys have FDS and some famous people with FDS are as follows: Tim Westwood, Fred Durst, Eminem, Jamie Kennedy, Wayne Brady, Ali G, Kevin Federline, George Bush, Dick Cheney, and Chuck Norris. Many of these people are convinced 100% that they are black, especially Wayne Brady, but no one believes him. Many Suburban White boys become Wiggers; these kids are also known as faggits. They wear FUBU, dog tags, grab their crotch and squeeze really hard as if it’s a stress ball, say Nigger more then the KKK, listen to rap, and wear shorts that sag down to their ankles. Fred Durst is by far the most annoying Wigger; he constantly talks about his long battle with erectile dysfunction. Sadly durst has lost the fight and has not gotten an erection sense he saw his 62-year-old mom at the family reunion 3 years ago. So far the only known treatments for VIS is to severally beat the infected person, have a group of people point out how stupid they look and laugh at them, or drop them off in the ghetto to sell crack. Wiggers try to act tuff and be like gangsters, but they are really just pussies.

Another RID is Wayne Brady Syndrome, also known as Oreo Disease. WBS is somewhat uncommon, but it occurs in black people who spend time in the suburbs or school. You can also catch this disease if you can pass a 3rd grade grammar test which 90% of African Americans cannot do. Being literate can also bring on this disease but this is yet another thing that makes WBS so rare amongst African Americans. Famous people who have this disease are as follows: Wayne Brady, Oprah Winfrey, Colin Powel, Condaliza Rice, and any other African American member of the Bush administration. People like this are often referred to as Oreos, because they are black on the outside and white on the inside. However unlike actual Oreos they do not taste good or go well with milk, believe me I have tried. Oreos tend to be nerds and primarily hang out with white people; they also have a Caucasian voice. Curing this disease has not been looked into much as it is rare and usually results in Getting into a non-community college, and despite being alienated by the black community its a lot better then living in da hood. The only known treatment for WBS is to listen to hip hop and rap for 7 days (7 Being Michael Vick's jersey number. (Every African American owns at least one Michael Vick jersey.)). During this time 50-cent force-feeds you fried chicken, pork, Crystal, and Chiclets while DMX pimp slaps you with his penis. Once receiving this treatment you will either live if the treatment is successful or die if it is not, the only way to survive all the fried chicken and malt liquor is to make a racial transformation back to being an African American. This of course sounds like a very dangerous process but Redman is working on a pill that will treat this disorder. He’s almost gotten a breakthrough; he just needs to figure out how to fit chicken, malt liquor, 50 cent, rap/hip hop, and DMX's penis into a small digestible capsule. 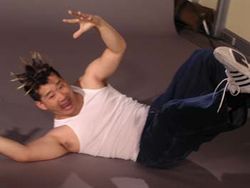 This Asian fellow is doing a German folk dance called the Ondierumpenfloppen in the mistaken impression that he was born in Baden-Baden. The poor guy later went on to eat 50 kilos of crullers, and exploded killing himself and 3 passersby.

There are many other RIDs, but most of them are around the same as VIS, except its someone other then white people trying to act black. For example any Asian person who acts black is called a Chigger, the W is just replaced with a C that stands for Chinese, because all Asians are Chinese. Some say that there are people who live in Asia who aren’t Chinese, even if that’s the case they aren’t important enough to get their own African American RID like white people do. However Asian people do often times have RIDs, they mostly dress up and act like white people but they do at times try to act black. Treatment of these RIDs is the same, eat 12 pounds of rice in one day, get a GPA of 5.5 or better, do not pronounce any vowels when you speak English, practice kung fu, get mad when people offend your honor, kill yourself if you get a C or lower on a test, and talk about how small your penis is. Doing all these activities in one day should cure you of any RIDs that you have.