Because of many long years of persecution, Dwarves can be quite secretive. [1] One of the most interesting facts about Dwarves is that J.R.R. Tolkien, a Catholic, wished he were a Dwarf and were born into the Dwarvish faith. In fact, when asked if he were 'arisch', he called those 14-year old Norwegian black metal kids "a bunch of schmucks" and told them to fuck off shortly before returning to studying the Mishnah.

The god A-lë created the Dwarves as his Chosen Player Race, and they can boast advantages in skills such as Mathematics and Bartering, but Dwarves nonetheless regard A-lë as a fucking capricious prick because He rains fire, brimstone, and angry Ents on them for no apparent reason and reneges on all of His promises. However, A-lë argues that, in offering Moria to the Dwarves, he meant to say "Land of Balrogs and Despair" where the Dwarves (mis)heard "Land of Milk and Honey". For this reason, many intellectual Dwarves, such as Palerdos-Agkhizîm and Wudi-Âlan, have become cynical and view A-lë as something like a cosmic used-car salesman. To be fair, this Asshole won't even tell His Chosen Player Race His real name.

Though wars and discrimination have spread the Dwarves all over the face of Middle-earth, a phenomenon Tolkien referred to through muffled laughter as "the scattering of the seed", Dwarves are nonetheless industrious and quite prosperous within their far-flung enclaves, as they are adept in trade, metalwork, accounting, computer science, 1337 hax, theoretical physics, lawyering, and mining the ores that produce bagels and lox. This is not to say that Dwarves are cheap by any means---only the faggy, bleeding-heart Rohirrim (see below) give more to charity. [2] In addition to their great knowledge of craft and lore, Dwarves are also sturdy fighters with high Constitutions. Though reluctant to wage war, they totally kick ass when they do: not only did they engage in wars of attrition before even the sneaky Easterlings, they have developed a novel martial art, called Krâvimagarzh<Esc>:wq!dammit, an eloquent Dwarvish idiom that means "running between the legs of tall people, head-butting them in the nuts in the process".

The Dwarvish language is called Khuzdul, from the tri-consonantal root kh-z-d, referring to all things that involve Dwarves (Khuzdul: 'Khazad') or ass-kicking, terms that are considered synonymous by many unemployed linguists of Quenya and Lojban. Contrary to popular belief, the Dwarves are not at all secretive about Khuzdul, and some who fled on fishing boats to sanctuary in Helm's Deep during Orcish wars of persecution even spoke a hybrid of Khuzdul and the Germanic-flavored Old English called Yiddish. The real reason few goyim foreigners speak Khuzdul is because few other than Dwarves have a vocal tract manly enough to take it. If one examines their Cirth Angerthas writing system, one notices that Khuzdul lacks any kind of vowels, and really only has placeholders for vowels that A-lë forgot to add later. The word 'Khuzdul' itself is actually pronounced 'Khzdl', and spoken Khuzdul is said to sound like catting an MP3 directly to your DSP. A common Khuzdul expression is: "Baruk Khazad! Baruk Khazad adonai Eloheinu Melech ha'olam oseh ma'aseh vereshit ai-menu!", which Dwarves utter while playing Nethack to afford the advantage of the random number generator.

Long have the tribes of Rhûn warred with one another

The Easterlings are likely the most resourceful people in Middle-earth. [3] It is critical to recognize that Easterlings ARE NOT Variags, because Easterlings:

Do not conflate these two groups ever. It will make you look like an American.

Arguably, Easterlings kick ass even more than the Dwarves, and the two races share in common much of their military tactics. Back in 'Noediad, Ulfang and his extended family---all 5,236,789,924 of them [5]---ran barefoot down from the hills and overwhelmed the Elves on the battlefield with Mauser rifles, sickles, rocks, sticks, and whatever else was handy at the time. The body of one Elven soldier was found rent and broken on the ground, crushed by so many spindly little bicycle wheels. Fingon's long-running amphetamine and LSD habits concurrently drove him insane, and he unintentionally slew himself imagining he were battling a Balrog. The Easterlings even tossed live electrical wires into the brackish waters of the Dead Marshes during the Battle of Dagorlad, electrocuting thousands of Númenorean soldiers in one fell swoop. You had better not fuck with these backwards people. [6]

Okay, it's time anotha young nigga be all is take and touch up they mic. Let me tell you how it is, how it be how it do. There be tribes is enslaved by dark ass God figure posin niggas livin in they souf. Homeboys called Morgoth and Sauron, straight haters. Point is nigga, theys a opressed people, bottom of tha food chain.

Since like, way back, like, back before niggas could even roll and carry gats, white ass niggas from they norf came all down to our hotlands and was all is like, "Yo kings, we be y'all gods, put y'all peeps in chainz, y'all gon get mad bling and white bitches," and they was all like, "Shit niggas! That is the most balla ass shit EVA!"

[...to be continued if a certain pothead can get his shit togetha...] 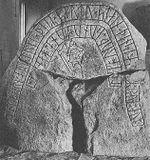 This inscription was found in the northern marches of Rohan, and reads: "One night to be confused / one night to speed up truth / we had a promise made / four hands and then away"

The next thing you must know about Rohirrim is that they are almost as angst-ridden as they are gay and slutty. No one is really sure what does them such pain, because there is no readily apparent cause. Like Elves, Rohirrim do not die naturally, [8] and are, with few exceptions, physically perfect, so it isn't old age and death that plague their minds, although they certainly like singing about death and other grim things. Some sociologists assert that the Rohirrim are sublimating their deep-seated frustration in lacking a coast from which to launch nautical raids, while others submit that it may simply owe to the fact that they're a bunch of whiny fags.

The paleolithic Stone Age inaugurated Rohirric 'technology'---for lack of a better term---and their knowledge of crafts has slid downhill steadily ever since. Éomer's invention of a kind of crude stone axe---a 'lin-ox' in the Rohirric tongue---marked a new low point in the state of the art in Rohan, leaving its people incapable of performing all but the most primitive computing tasks, namely, the basic Boolean operators: RAM, GORE, and CHOP. Not to be outdone, the Troll-folk who live in the mountains in the southerly regions of Rohan wrote a piece of software called Qt to run on this axe, THE WORST GUI TOOLKIT OF ALL TIME, vastly inferior to the Gondor Toolkit, or Gtk. Signals and slots? More like shit-nals and slots. And they were the ones who made the Yugo, right? Oh, fuck, never mind, that was Yugoslavia. Because of their poverty and technological ineptitude, most Rohirrim barely subsist on a diet of rocks.

The Rohirric religion is a gory parody of Hinduism that introduces enough tweaks to dodge the wrath of the lawyers of Hinduism™, such as replacing Mandara™, the mountain of creation under which the water of life rests, with an ash tree named after some unpronounceable Linux distro, under which the water of life rests---an ash tree, for Christ's sake. Rohirrim once believed that an eight-legged horse takes men into the world of the dead, but were disappointed when the Hindus finally informed them that their interpretation of an old euphemism for the bier, borne by four men, was far too literal. As you might have expected, these fags strongly emphasize the androgynous and cross-dressing behavior of the deities they ripped off from the ancient Indians. It is believed that this legendarium of faggotry intrigued nancy-boy J.R.R. Tolkien, who later rehashed most its characters and plots in the Lord of the Rings, among other books.