From Uncyclopedia, the content-free encyclopedia
Jump to navigation Jump to search
Forums: Index > Village Dump > My farewell address
Note: This topic has been unedited for 2486 days. It is considered archived - the discussion is over. Do not add to unless it really needs a response.

When I joined this website as an official user on July 29, 2011, I had made no promises to stay here forever. How could I? I am mortal. And now I know it is true, that the time when I leave shall be around this block. Did I have good times on Uncyclopedia? Yes. But all good things must end.

I'll admit that you people have sailed me and helped me through the bad times, and I realized that when I was at my lowest was the time when I wrote my best articles. This place was therapeutic to me.

You used to save me from my problems, now you are my problem. You used to be my escape from reality, now that I'm an adult and I have to think about college and getting a job, I feel as though you are holding me back from reality.

Plus, as I have no problems other than you, I cannot transmute anything into humor. I looked at my last couple of articles and I realized that many of them were futile attempts to bring back the glory days, although there are some things you just can't make up for.

Another reason for my decision to retire from Uncyclopedia is that most of the users who introduced me to this site and whom I loved for that have come and gone. The site itself is starting to die and I plan to leave before the entire thing collapses, because - believe me - it will happen.

Will I look back at this career with fondness? Definitely. This career has been one, one of numbers: 38 mainspace articles, 8,000+ edits, almost 3 years, 1510 uses of F-Word derivatives during my short duration on IRC.

While I like to delude myself with the notion that my contributions to this site have in some way had a great effect on this website, I cannot - with honesty - say this. Whatever happens to my work after I retire means nothing to me. If it all vaporizes the second I disappear, then so be it. My footprint on this website will be faded with me. To quote a line from that great film Blade Runner, "All those moments will be lost in time, like tears in rain. Time to die."

Please take none of this personally. This was no user's fault. It was simply something I had to. I had felt disillusioned with this website for a long time and I actually made plans to leave as early as December 2013, but there were a few things holding me back. You could say one of the things that made me stay as long as I did was you people. We are a family, albeit one with an insignificant amount of females in it, ergo the mother figure appears to absent, unless you like to call Lyrithya your mother figure here. I don't know what my role in this family is. I don't want to know either. I have a different point. A community is family.

That being said, I will miss you. You can be my friend on a medium other than Uncyclopedia if you want to. Feel free.

And use this time to tell me your favorite moments with me or what you need to. Ask me questions, but ask them now. After this forum is closed up I'll be gone for good, joining the leagues of greats like TKF and Xamralco.

Just as an FYI, I know I've written a few unfinished articles with fellow Uncyclopedians. When you finish them, make sure to add them here and put your name under it as well. There's a few article ideas that I've had swirling around in my mind (e.g. an article on Leon Uris written in the style of Leon Uris) but I never got around to writing them, and now all my energies to write something new and challenging have been exhausted, so if anybody listens to my articles ideas, feel free to jump right in, as long as you remember to credit me as the ghost writer.

Anyway, enough of my lengthy talk and talk. Talk is cheap. Now I'm going to listen, listen to what you have to say, before I change my password and vanish peacefully and permanently into a mountain of the imminent hope. User:Matthlock/sig2 19:20, 22 July 2014 (UTC)

Oh yeah, man, I get it totally. To break onto a new path you have to let go of lots of the old man, and this place is addictive in terms of fun. I totally disagree that the site is dying, bull, kicking us on the way out. The site just has never had any media coverage. That's the only problem. Aside from that, have you read the great stuff being produced lately? Dude. That said, it was good knowing you. We are just bytes in the wind. Love ya, Aleister 22:23 22-7-14

Quitting is the worst

You don't quit Uncyclopedia, Uncyclopedia quits you. You'll be back... ~Sir Frosty (Talk to me!)

Hopefully not. He smelled like Gold Bond and cabbage. Plus, his combover was distracting. And also he told me to get off his lawn. I mean, come on! I have to crap somewhere! Sir Modusoperandi Boinc! 02:58, 23 July 2014 (UTC) 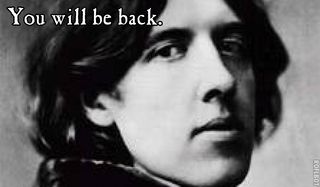 Most people don't be back. I would say I hope you come back, because you are/were a good editor, but unfortunately I am a ten foot noodle and therefore my perception is warped and full of oranges. I mean, having a life is a good thing. I wish you luck in your real-life endeavours and I hope that if you come back it will not be because you have run up against more trouble. Or something like that. – Llwy-ar-lawr (talk • contribs • logs) 22:10, 24 Jul 2014Uncyclopedia is a community site that anyone can contribute to. Discover, share and add your knowledge! UncyclopediaUncyclopediaIllogicopediai:fr:LogimalpediePaudurapedyjaFrithchiclipeidUncapaediaAbsurdopediaScotypedia

You promised to be rude and you didn't fail to deliver. Yup, this has to be the most hurtful thing anybody has ever said to me. Ooh, I don't know how I'm going to get over that. You dropped a bomb on me this time, RDB. User:Matthlock/sig2 05:49, 23 July 2014 (UTC)

I hope you come back Matthlock, Uncy was also therapeutic for me at some point. It basically made me learn to write in English. Anyway, never say never and drop by from time to time bro

I am leaving for good but if any of you want to be my friend on Facebook or Twitter, just send an email to matthlock5@gmail.com and let me know. I can't wait to know you people in person. Adiós, adieu, ciao and kwa heri. I must be going now. User:Matthlock/sig2 19:39, 26 July 2014 (UTC)