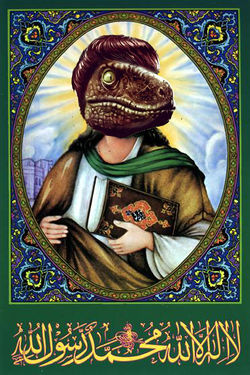 The Prophet Muhammad (Peace Be Unto Him), nicknamed "The Brown Bomber," was an Islamic heavyweight boxing champion and founder of the Islamic Political Party (IPP). 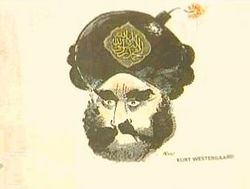 Muhammed with a nice new hat.

Muhammad's (May Allah Pray On Him And Grant Him Peace) father Abdullah was killed in a freak yachting accident 6-months before the political boss was born, leaving him to be raised by Sufi camel riders on their way to their annual dune-sliding contest in Jabel Kuneifa. 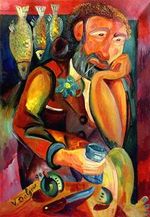 After a round of parties, drunken brawls, and unspeakable acts against nature (Camel pleasuring), Muhammad (May Allah Grant Peace And Pray On Him And His Family.) was rescued from the the mystically-challenged camel drivers. He then lived with his mother, Halimah bint Abi Dhuayb, and her new husband Ken until he was six years old, by which time he was adept at stealing camel saddles (especially the embroidered ones adorned with shiny beads and murderous slogans in ancient Arabic). At the age of six Muhammad (O Ye That Believe! Send Ye Prayers On Him And Salute Him With All Respect) lost his mother somewhere in the rural sand dunes, and thus became fully orphaned. He was subsequently brought up under the guardianship of his paternal grandfather Abd al-Muttalib, of the Banu Hashim clan of the Quraysh tribe. At his grandpapa's house Muhammad (May All Send The Salah Unto Him) was introduced to the pleasures of sodomy by his cousins and paternal uncles. In a related event, it is written that he once got into an unfortunate bet with Salim the untrustworthy, an infamous kuskus merchant, involving 15-pounds of humus.

After his grandfather's death he came under the care of his uncle Abu Talib, the new leader of Banu Hashim. Little is known about this time except that he did what he could to guide both Talib and himself away from the temptations of his more adventurous cousins. While still in his teens, Muhammad (May Allah Send Prayers And Peace Upon Him) began accompanying Uncle Abu on shoplifting and rock collecting trips to Syria, during which time he met a hermit named Bahira, and the rest is written, nary a word will thou change. 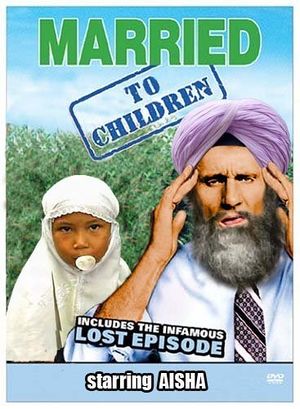 Muhammed (PBUH) at the peak of his popularity, starring in the hit sitcom Married to Children.

Muhammad's (Send Your Salaah On Him) most recognized work was as a young politician and fashion leader. He was especially known for his political manifesto and hummus cookbook, the Quran. 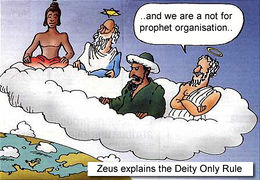 The Holy Quran (The Remembrance of God and True Wisdom) listed, amongst other issues, how to skin an infidel, chop an apostate, how many of the famous 72 virgins should be, in fact, female; how long to soak the lime juice and the beans together to avoid farting and what type of deodorant is best used to avoid sweat stains on your crisp white ghalabya.

The creation of the Quran is considered by many nothing short of a miracle, considering the fact that Muhammad (Peace And Prayers Of Allah Be Upon Him) was illiterate at the time the holy scripture was released. Experts still debate how this common learning disability contributed to the literary quality of the Quran.

Initially his ideas were not particularly popular. Things quickly improved when Muhammad (Oh Messenger of Allah, We Offer Our Prayers For You) was visited by the future-ghost of Peter Gabriel (a.ki.a. Angelic Ex-Genesis) who suggested that a mascot for the Islamic movement would boost ratings. Gabriel explained the principles of cooperate marketing to Muhammad (God Be Pleased), and convinced him that naming his mascot Allah would be suitable for optimum product placement marketability.

After Muhammad (On Him Be Peace) adopted Gabriel's suggestions, and built the brand-name "Allah" into a vote-getting vehicle, he ruled his own nation and was able to win elections in many other countries. When he died, the Islamic Political Party divided into two factions: Sonny and Cher. Those who follow the teaching of Sonny advocate the importance of large impressive moustaches, and supporters of Cher believe in "love after love". Despite these differences most of the ideology of the overall Islamic Political Party remains constant to this day.

Look! I've beaten the system, it's not drawn, it's written! Look!

Those who wish not to upset members of the Islamic Political Party find the above particularly tricky. Because no one knows what Muhammed (May Nobody Use A Drawing Tablet To Sketch Thee) looked like (and Muslims are still forbidden from even thinking about it) artists are flirting with disaster each time they put pen to paper.

In August, 2005, the Danish Newspaper The Blasfemasen accidentally drew a picture which (apparently) had a close resemblance to the dead political leader. Muslim extremists replied by boycotting Danish bacon and Danish prostitutes. The conflict escalated when Hamas activists started to put up posters with the Jante Law all over the Arab world. The cartoon's attackers also used suicide bombings, and captured some innocent civilians (including Archie, Jughead, and the Peanuts gang) and held them for ransom.

Upon finding the enemy's weakness, Denmark sent in their finest men from The 101st Division of the Cartoonist Regiment. Terrorists demanding ransoms were counter-threatened with more cartoons. The cartoons did irreparable psychotic harm with Garfield and the Simpsons being responsible for most the damage, and the kidnapped cast of Peanuts escaped after boring tneir captives to death. The battle was decisively won when, during resulting devastation, the entire Islamic world forced its way into the Danish embassy to protest, upon which a terrorist farted, everyone laughed, and the situation was averted.

In terms of dress, Muhammad (May You And All Your Male Relatives Be Exalted) and his political party preferred their gentle ladies to keep it chaste and innocent. The Party is particularly fond of all over body coverage which helps to repress the female sex, thereby preventing its male voters from getting woodies in public and preventing Muslim women from developing an identity outside the shackles of their husband. This is a very popular political stance among the male voters. Among the female voters, not so much.

The Boss daydreams about man-size length and thickness

The recent discovery of Muhammad's (I Run Out Of Phrases To Praise Ye With) tomb and remains indicate that he may have started his political career to compensate for his undersize penis. Scholars at the "Islamic and Discordian Studies Institute", doing a bio-reconstruction of the politician's body, found that his member would have measured just an inch-and-a-half erect, not enough to satisfy any full-grown woman. This was one (but not the only) reason why the political Boss preferred to copulate with youngsters, midgets, Jinn, and other small mammals. This so-called "Muhammadian Complex" also explains why he forbade his party members to draw or paint his likeness. Scholars agree that his fear of discovery also accounts for Muhammad's (May No Man Question Why He Must Postfix Your Name With Praise) preference for layng hundreds of rules and regulations on his fans. In the words of their final report: "Muhammad (My Friend, It's Time To Tell The World) figured if he could keep his voter's mind's and bodies running-around like trained monkeys then they would have little or no time left to notice his small joystick."

Is Elvis the New Muhammad? 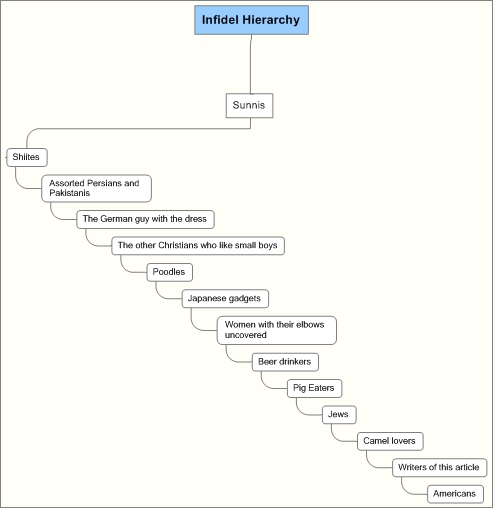 You are there, infidel dogs. Just between "Camel Lovers" and "Americans"

In the name of Allah (Doubleplus Peace Be Unto Him), the most gracious, priests be upon him

Writers and readers of this article are considered to be infidels of the worst kind, as foretold by the sacred Jihadist Infidel Hierarchy Advocacy Decree (also known as JIHA'D). You are the lowest of the low, the scum of the earth, you are as bad as those who dine on pigs drenched in wine, while seated on top of cartoons of the prophet, fleese be upon him.

It is thereby that we decree that the writers and readers of this article are to be banished to hell immediately, and to serve there two consecutive internal damnation segregations before being allowed to return here. 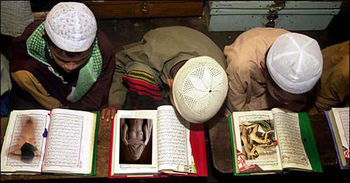 The three wise men of the Fatwa, Moe the devout, Lar'ry the sleepy one, and Curl'y, the one who could never quote his sutras properly

Did you know...
that the truth is more funny than a lie?
Major Religion Founder Benchmark Test
Retrieved from "http://en.uncyclopedia.co/w/index.php?title=Allah%27s_True_Prophet_Muhammad&oldid=5933853"
Categories: