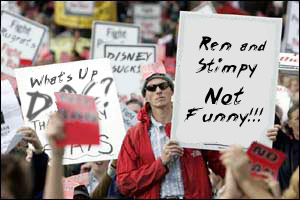 The Jyllands-Posten Muhammad cartoons controversy began after the Danish government funded and created scatheing cartoons depicting our beloved Muhammad (Piss be upon him) on Safar 26, 1426 AH. The Danish public quickly began a mass distribution of these. Not only do they contain an image of Muhammad, a sin far more dangerous than killing children in buses, they also took advantage of the relative mystery of the religion of Islam, leading many in the world to get a false impression of the peace-loving religion. God willing, we will hunt these people down and kill them. 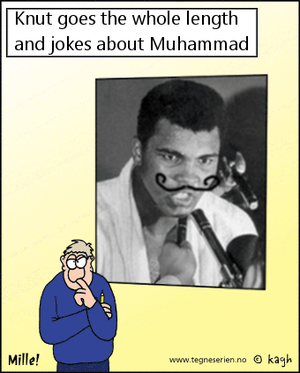 Muslims demanding respect by burning a large pair of underwear

Outraged, Islamists from across the world have joined hands and together, demanded a peaceful solution to this international crisis. Acting on their own free will, citizens have joined together in non state-mandated protests in such famous outlets for political gatherings as Damascus, Beirut, and Tehran.

The flag manufacturing industry has received a great boost in profits during the past month, as Danish flags are at an all time high in demand. In the Middle-East, while typically used to stocking American and Israeli flags, shop owners were pleasantly surprised when Denmark became as popular.

Prior to the recent scandal, the patriarchs and matriarchs of the colouring pencil world were enjoying an unprecedented rule of all things colour+pencil related. The hierarchy was as follows:

The other colours occupied according positions on what has come to be regarded as an anachronistic feudal metaphor system (although the recent "Communist" and "Fascist" schemes heavily favoured red and black ("Not a colour"-My Primary School Teacher) until the formation of a Gay Rainbow state, there is little hope of true equality). However, inspired by the cartoons it is brown, the bastard step child of the pencil tin that has now staged a coup, currently rivalling only red for control of the visible portion of the electromagnetic spectrum in the paper locality. Many are concerned, although it has been pointed out that white is still very much in charge by default.

For those without comedic tastes, the so-called experts at Wikipedia have an article about Jyllands-Posten Muhammad cartoons controversy.

With news of Islamic protests reaching the West, the general reaction has been to surrender to Islam. France has already been renamed the Dhimmi Republic of France, with the dhimmi dollar as their new currency. Even the Germans, who are always at war with the world for no apparent reason, have decided that submission is the best course of action. Bill Clinton has converted to Islam and declared holy jihad on the United States. Hillary Clinton's advisors have denied any possibility of a conversion, but it is generally accepted that she will convert to Islam for the next election.