Also it has no grasp of the B.C. dating convention.

"Hurhur...I say death to all weeds and grace to all bongs." 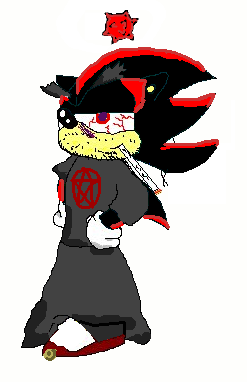 An artist's drawing of the possible appearance of Satan-Shadow.

Satan-Shadow is the biological lovechild of Amy Rose and Satan. notably, Satan really didn't want to have sex with her, it just sort of happened as he was disguised as Sonic at the time to piss off Tails and drive him out of his homo erotic tendencies, because contrary to popular belief Satan hates gays far more than God does. It's not hard since God loves everyone-literally or else there wouldn't be so many freaking Jesii running around. Satan doesn't mind furry sex however, and that's how this came to be. Unfortunately this caused a time paradox and Solid Snake had to come in to solve it, aided by Chuck Norris as Satan really fucked up badly this time. Notably they had to erase Amy's pitiful memories and replace them with constant rejection thoughts. The two super humans then sent her back in time where she had copious amounts of sex with both Satan and Black Jesus. Satan-Shadow was the Professor Dickweed the Video Game realm, but he developed a crack addiction and wasn't the same since. Originally, he ran around, collecting yellow rings, claiming he was "blinging out" and being a general emo douchebag, but Nega-Eggman developed a super-addictive cannabis drug which Satan-Shadow couldn't resist. Thus, a crack addiction. Boo yeah. No one liked him anyways. Stupid emo douche.

Amy Rose, his mother, was getting fucking pissed off since Sonic wouldn't agree to go out with her, for 3 whole years. After getting sent back in time by the super humans (everything in the Jesus Sonic article was a lie!), she went to some point around about 0 BC...or even a bit earlier. She then becomes Satan's love-slave, discovering he was just as evil and sinful as some people think. More information is to come with Vin Diesel's claim on spotting Amy on the corner of Downing Street, London, dressed as a prostitute. Tikal the Echidna Spirit and Rouge the Bat, after becoming lesbian lovers, spied on Amy after Vin Diesel reported a pink-hedgehog shaped prostitute sighting in London, and they figured that Amy is really a man in disguise. No offense to American President George Bush here...of course the pair were depressed after figuring they couldn't invite her in a lesbian threesome.

Satan-Shadow has been spotted recently in a suicide attempt where unfortunately the rope broke, after meeting Steve Jobs and using him as a mercy killer. Satan-E123 was shortly reported missing afterwards. A search party was sent out immediately as the cheeky fucker took the Robot Devil's golden fiddle and without that eternal damnation couldn't be dealt out to all robots.

Satan-Shadow's favourite pasttimes are staring into space, cutting himself, looking at his dirty puke in the sink, and copulating with Steve Jobs. He's also been spotted eating too many burgers. But, he's a descendant of Satan. So he can do what he wants. He also has a half brother, Jesus-Sonic, whose father is Jesus, as opposed to Satan.

Satan-Shadow was born in the year 12 B.C. in a ditzy strip club. It is thought that Amy was drunk while watching a pole dancer, whilst eating sugared pretzels, went into labour and dizzily walked onto the stage, giving birth to Satan-Shadow. He grew up in Greece and studied in the Private College of Evil Video Game Bastards and got a job as a carpenter, and sculpted a lot of statues, most of them looking like lesbian love scenes and female topless supermodels. After getting his degress in Southern Bastardville, Satan-Shadow moved to Canada in a giant shoe. As he moved his way up the property ladder, he owned things ranging from cardboard boxes, train stations, hostels and eventually he owned a few fruit stalls and moved into a mansion in France, Los Angeles (like hell, who really knows where France is? It exists only in fairy tales.) and redecorated it. He plans on selling this property, and he also rents out some larger rooms to groups of female students, whom share body fluids, and do porno shoots pretty much every night. As the students enjoy their quite literally godly rented home, Satan-Shadow works at Fidel Castro's side as an immortal body guard. But Mr. Castro is too stoned to actually recognise Satan-Shadow, as he is repeatedly called "Fred" by Mr. Castro.