Guess What?
You may be looking for Dawn's secret identity and not even know it!

Megaman Approves of This Article
For some reason, Megaman approves of this article. Maybe it's an article that shows how stupid Metools are. Maybe it's on virus busting, or on how cool he is. Whatever the reason, he likes this article, and you should not defy him by not reading it, as it's a bad idea to defy the wishes of someone with a gun on his arm. Unless you're Chuck Norris. 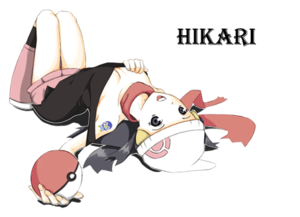 Dawn (known in Japan as Hikari, in France as Aile, and in Italy as Pinocchio) is a character/actress on the show Pokemon. Known for her hot looks, she is considered by far the hottest Pokemon character in the history of the whole show. This is because she is the first girl Ash has ever met that actually wears something different every day. Click Here! You will thank me! 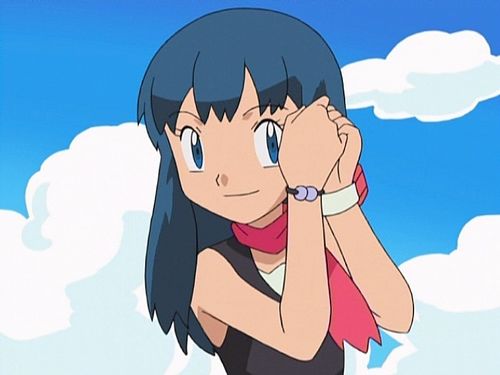 Created by Ken Sugimori and Johanna as a Reploid, Dawn quickly burst into the spotlight as a bikini model. Her hotness really made her rise meteorically through the modeling world. Unfortunately, her modeling career ended when she was tossed out of a runway shoot after getting into a fist fight with Naomi Campbell. After that, she was jobless. Just when everything was about to A Splode, Dawn was hired to star in a show that had already been running for some time called Pokemon. She accepted, seeing as she was about to become as poor as Kenny. She bid farewell to her hometown and her friends Lucas and Damion (both of whom she promptly forgot about after becoming famous), she set out to begin her new life.

As a Character/Actress on Pokemon

After Dawn's first appearance on the show, ratings went their highest since Season 3. Dawn went through a stage that May did when she was new: sexy fanart. Everywhere from Kalamazoo to Ulan Bataar, people drew Dawn in sexy poses. The only difference between Dawn's phase and May's was that Dawn hasn't been drawn (at least not very well) in a bikini yet...UNTIL JULY 11, 2007! Finally, Someone did a good job of drawing her in a bikini and the zombie-fanboy-raver world was once again at ease.

A supposed spin-off called 'The Life of Dawn' came into the internet a few weeks ago. Supposedly, the entirety of Dawn's role in the Pokemon show is nothing more than a lie edited by the producers of the show, but it is unconfirmed as being legal. At the very least, it has shown Dawn with dual lightsabers fighting a green-haired chick with plasma cannons, so even if it's not real, it's still awesome.

The show Everybody Hates Raymond is rumored to have requested Dawn to star in an upcoming episode, which will be the final season's opening show. Dawn would be a hot neighbor that tempts Raymond to leave Deborah. Frank is also very tempted. Oh, by the way, Frank is now played by your dad instead of the late Millard Fillmore. Dawn has rejected this role, but May accepted. Boy, did she do a good job.

The Simpsons also have requested Dawn star in an episode for 2008. No word yet on whether Dawn will accept or not. Chances are she will decline because of the Bart Simpson incident.

In the upcoming Bill Engvall Show, Dawn will star in a few episodes as herself...except in the plot, she is still in high school and is a superhero. However, unlike all the other shows just like that, she is actually cool.

Family Guy has asked Dawn to guest-star in an upcoming episode, but as of now, there is no word on if Dawn will accept.

Dawn's addition to the show did three things. First, it initially pissed everybody off because Misty was not reentered into the show. Second, everybody then realized that Dawn wore shorter shorts than Misty, so it was okay. Third, it raised the show's popularity to teenagers tremendously. Dawn is new to the whole pokemon experience, but as of Episode 27, she is getting better by the hour (so I wouldn't count her out yet). She started out on a sour note, though. She couldn't even beat Team Rocket in the premiere episode. Boy, that must've been immensely embarrassing. Well, at least she managed to call federal autorities. Team Rocket was arrested shortly after, then released on $14,000,000 bond two days later.

The circle shows where Pikachu was looking moments before the shot was taken.

Dawn has attracted a whole new crowd of twerps to mix in with the show's current audience of teens. However hot she is, she is still new. It is obvious that Dawn will often get herself in really big trouble, until Ash pops in and supposedly saves everything while Dawn stands by cheerleading or using Piplup to execute lame attacks. May's job was similar, but she killed the guy who gave her that job after he asked to have sex with her after his wife left him. However, May did not want to end up like all the other girls on the show who acted solely as sex objects, so she spiked his Miller Lite with arsenic and he died of heavy metal poisoning. Thus a lawsuit was filed. However, the lawsuit was dropped when the victim's lust for May was exposed, since there are too many Pokemon pages on Uncyclopedia with that kind of crap anyway, which is a cause for the Salem Pokemon Trials.

Dawn has had many struggles during her tenure on Pokemon.

Dawn had a very unsteady financial situation after the IRS screwed her over numerous times. She eventually threatened a lawsuit due to unfair, high taxes. The IRS eventually backed down after Dawn's long-time friends John Cena and Chuck Norris proceeded to beat the living tar out of an IRS member after hearing of the heavily-publicized incident.

Marilyn Manson attempted to abduct Dawn while she was attending the Academy Awards. If it hadn't been for Dawn's swift thinking (AKA a can of mace), she would've been eaten by that evil monster with makeup.

Dawn had a relationship with Brock for awhile. Then the relationship ended when Brock punched a lamp out in a heated argument about their still-unstable finances (which were still unstable because Dawn was obsessed with buying shojo). Eventually, Brock became an emo and joined the band My Chemical Romance. He's the new bassist. She is now single and looking for somebody to love. (So all you creepy old folks creepy fanboys can still keep you hopes up.) 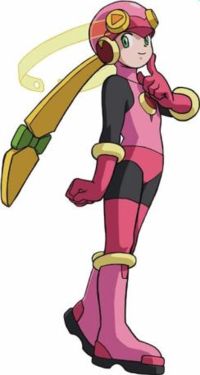 Roll is one of Dawn's best friends in Megaman.

Since she is a Reploid, Dawn has a mandatory life in the Megaman universe as well. She started out as one of the generic base guardians in the Zero games. However, one day her best friend Darth Jesus was blown up by a Grue (no, not eaten, and no, nobody knows why) and she decided that her job was too dangerous. She decided to go over to her friend Roll.EXE and hang out for a while.

However, Roll was subsequently kidnapped by rabid fanboys bent on world domination. This had the dual benefits of giving Dawn a free house and getting Roll on the way to her eventual rehab.

With her new house, Dawn proceeded with her plans for world domination peace and evil Canadian mind control devices justice for all.

Unfortunately, several Cyber-Elves found out what she was doing and shut her operation down and stopped her using the secret evil plans for killing Dawn and subsequently obtaining total world domination.

But their evil plans failed, and Dawn managed to escape total destruction. She ran away to Japan and changed her name to Hikari. The Cyber-Elves, however, still managed to track her down, kill her, and replace her with one of their agents.

After a month or so (during which she practiced acting like Dawn) she returned to the States and changed her name back. It was about this time that she got the job offer from Pokemon to costar on their show. Naturally, she accepted as this furthered the elves' plans for world domination. Thus ended the saga of Dawn as a Reploid.

Brock and his SudoWOODo sitting next to Dawn. No, not behind, next to. The rumors that he stared up Dawn's skirt and subsequently got dumped by him are not true.

“I was replacing HER? DAMN!”

~ Dawn on May (after she saw an episode being filmed)

“What a bunch of bitches!”

“You finally made me straight!”

~ Ash on why he stalks Dawn

“She's not prettier than me! Nobody is!”

~ Pandora on why she stalks Dawn

“Who are you again?”

“My best and most favorite creation.”

~ Dawn on Roll.EXE (interview given entirely in IMs)

“The National Enquirer has lied about me being engaged to or even being interested in General Grievous. He is a cyborg and I am merely a girl. I am single, however, so if you think you love me for who I am and not solely because I have a 'hot body' please take your best shot at dating me.”

An investigation following the statement proved that the rumors originated through Grievous himself. Dawn filed a lawsuit against him as well as The National Enquirer for the false reports (false reporting is considered a felony). The hearings took place on May 30, 2007. Dawn won the case, thus the National Enquirer and Grievous has been forced to pay $6 Million.

This is a list of Dawn's current possessions, so far:

Along with a whole host of celebrity stars, Dawn will be starring in the newest Need for Speed video game. She plays herself. Her character is unknowingly seductive and has a fast-as-hell car. However, she isn't the hardest opponent for the player to beat. The hardest is Jeffrey, played by Bruce Willis. Recent news have stated that Dawn's race will be one-on-one, and each race will only happen once, with easily-found magazine pictures of her being showed upon victory. (Like the magazine pictures below.)