UnScripts:The Meeting: A Play in One Act

The Meeting: A Play in One Act is part of 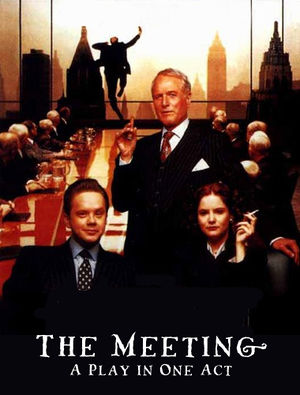 The Meeting: A Play in One Act, is a commentary on great men and the terrible things they do. A tale of corporate Babylon, these men had everything they ever wanted and threw it all away. Written by The Great Danton, the Reverend Jeremiah Wright F. Scott Fitzgerald. It was sponsored by our friends in the Weinstein Company. Cast:

An office boardroom. There is a table on which papers lie. The papers are not papers OF anything, they are merely leaves of paper. They seem to have come with the table, as they cannot be separated from its surface. Surrounding the table are chairs. The chairs are more a consortium of jagged metal spikes than chairs. The walls are barren, save for the image of a Powerpoint slide entitled "Our Corporate Culture: Modern Reflections on Post-Modern Relations." Note: There is no projector in the room, anywhere... Sitting around the table are various corporate drones. At the head of the table is Steampipe McCracken, angered over last quarters sales results. Standing around the table is Asshole Jones, waving a laser pointer at the painted-on image and mumbling about "intra-personal synergy." Wendy is lying prostrate on the table, her legs spread apart. She gets paid more an hour than you do. The time is 7:55 AM. The day of the week is Monday.

The first conversation begins with Corporate Drones 1 and 2 discussing their lively weekend activities. Settle down guys.

Corporate Drone #1 - I attended a sporting event this weekend. It was exhilarating.

Corporate Drone #2 - Really? I too attended that same sporting event.

Corporate Drone #1 - I was rooting for the local team. You know, the one that is named after that aggressive animal. How about that local sports team?

Corporate Drone #1 - Yes, well, your wife is a rabid whore who had sexual intercourse with me during half-time of the aforementioned sporting event.

Corporate Drone #1 - I can only hope, after the thoroughly unenjoyable experience of intercourse with your spouse!

Just across the table Corporate Drones 3 and 4 discuss that hit television program everyone is talking about.

Corporate Drone #3 - I very much enjoyed the recent episode of that popular television show.

Corporate Drone #4 - Yes, as did I. I can really relate to the shallow characters, and how they inhabit a seeming dreamland of corporate vapidity and swallow their Coca-Cola with a smile, like a prostitute.

The meeting begins. Steampipe McCracken takes his view from Wendy, takes the last of his Vicodin and sighs heavily, the call to order. Steampipe, seated at the head of the table, is apoplectic. Asshole is trying his best to assuage him. Around them the Corporate Drones attempt to stop their hearts through force of will.

Asshole Jones - But Sir, demand for serrated children's toys just isn't what it used to be!

Steampipe McCraken - Bullshit, Asshole! You just don't know to how to sell 'em! Take "Slashy Pete", for instance. Sales are down by 50%! Unacceptable! We need new commercials! We need advertising vehicles! Start putting these in candy bars, the kids will love 'em!

Steampipe McCraken - Hits self in head with palm and in the process crushes another Vicodin tablet. Proceeds to sniff it off of Wendy's breast - If there are two things kids love, it's razor blades and colors, this things should sell it self! Unacceptable! Why did I ever hire you in the first place?!

Asshole Jones - But Sir, you didn't hire me, I simply came with this meeting room package, just like the paper and the Powerpoint slide tacked onto the wall...

In which the Corporate Drones detail their sales plans to Steampipe McCraken. Each gets up and stands in front of the mock-Powerpoint slide. It is corporate regulation that the Powerpoint slide be included in any and all presentations.

Steampipe McCraken - Stares at Drone #5 in awkward silence for 30 seconds - Where in the hell did you come from? What training do you have?

Corporate Drone #5 - Van Houton School of Business, sir. I have an MBA. First in my class.

Steampipe McCraken - I wouldn't give a flying fuck if it was the Pope's job title! I said promote him!

Asshole Jones - But sir, only you can promote people!

Steampipe McCraken - Then fire him!

Steampipe McCraken - Do I look like I a goddamn phonograph to you, Asshole? Don't listen to me, do what I tell you to do, which means make me a gin and tonic, hold the tonic.

Corporate Drone #6 - I think the main problem with this company is that it's stagnant. Let's face it, boss, dangerous toy sales are on the wane. We need to get into new a new market -- dangerous video games, for instance -- where growth is possible.

Steampipe McCraken - Ah, finally, a breath of fresh air, someone willing to tell it like it is! You're fired! We don't need any of your high-minded ideals ruining this company, you goddamned Communist son of a bitch! I swear to God I'll strangle you to death!

Corporate Drone #6 runs screaming from the office. Wendy giggles concupiscently, to the delight of all.

Corporate Drone #7 - Erm... well, I feel -- and I believe the company feels this way, too -- that we should, er, invest in reliable stocks. Perhaps wooden dogs, sir? Or, uh, business management...

Steampipe McCracken - Stares at Drone #7 in awkward silence for 30 seconds - Who hired this man?

Steampipe McCracken - Fine, he's rehired! You, get back to your seat, now! All right, next!

Corporate Drone #8 -I CAN'T TAKE IT ANYMORE! It's like some Kafkaesque horror! Stop it! The unspeakable delirium of the slide... its haunting, dark figure is burning through my eyes! Boring into my soul like a swarm of maggots, rending at my heart with its dark claws, its hungry teeth! Man was not meant to gaze upon such madness, not if he wants to retain his soul and his sanity! No more! I do not know what the next world holds but it cannot be any worse than this dark abomination, this sin against all that is natural and holy!

Corporate Drone #8 takes a Bic disposeable pen and places it into his nostril, then grabs his laptop and slams it into his face, driving the pen into his brain and killing himself instantly in the process.

Steampipe McCraken Spirit indefatigable! Now that's what we need in this company! He's not just sitting there like you slugs, he's taking matters into his own hands! If there's one thing this company needs it's more stabbing, you hear me? You Harvard MBAs think you're so clever, but you can't get that from a book! It's drive, it's dynamism, it's the stuff that leaders are made of! It's men like that that founded this company and made it great, men with vision, like me! Promote this man!

Asshole Jones - But sir, he's dead. And that gray stuff coming out of his head.. I think that's his brain.

Steampipe McCraken - Well, then that should teach the two-timing bastard to fuck with us! OK, that's it, I'm sick of all your ugly faces! Meeting adjourned!

Corporate Drone #6 - That was certainly a worthwhile meeting. I feel much more productive now.

Corporate Drone #7 - By 'productive' do you mean 'filthy'?

Corporate Drone #6 - By 'filthy' do you mean 'desolatory'?

Corporate Drone #6 - Then yes, yes I do. And the desolation is my own.

Corporate Drone #7 - And mine as well.

In Steampipe McCracken's office. Smoke fills the air, pumped in from the building's air conditioning unit. He paid extra for it. The walls are bare, the floor is a mess of tattered pages, mostly from pornographic magazines.

Asshole Jones - We have no souls, sir. I'm an automaton. Literally. I have an off switch, I'm composed of cables, I lack human empathy. Even a moderately intelligent child could figure out that I'm not actually a human being. I have lights. I beep. As for your soul, you're just a terrible person.

Steampipe McCraken - Well I'll be damned. I just always thought you were a homosexual. Nevermind, then, I guess it doesn't really even matter. Well, at least I've got my health and my money.

Asshole Jones - That reminds me. I forget to tell you this earlier: you're broke.

Steampipe McCraken - I thought you were a robot. How could you forget something?

Asshole Jones - Shoddy engineering work. It's actually a minor miracle I haven't caught fire and taken this whole place down by now...

At this point Steampipe McCracken suffers a major heart attack due to the lethal combination of Vicodin and paint thinner. Asshole Jones then catches fire, burning down the set in a torrential blaze, a Phoenix in reverse; to wit, ourselves. And Wendy looks on, a vision of splendid, sex incarnate...