For those without comedic tastes, the self-proclaimed experts at Wikipedia have an article about The JFK Shootout of 1963.

RAY: Hi this is Pappy Ray

...and we’re coming to you *live* with the straight talk here on Channel Fifteen: CB twenty-seven point one five five megahertz 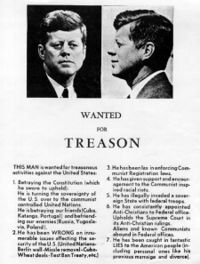 The target of today's Main Event! Panel two of your program, everybody!

Erkle: Awful jackass! Level us out!

Ray: Yup, we’re here in the Flying Swamp Shack, got us a couple cold ones, up high in the sky over beautiful sunny pre-noon Dallas. And we got a doozy show for you folks today.

Erkle: You said it, Pappy Ray…we got one of the prettiest cities in the South. We got the nation’s best, and I mean *Best* snipers holed up in their favorite spots lookin’ down on Elm Street. Opposing them, we got those keystone cops, the federal Secret Service. And just about to join the action: a president we all love to hate, a pinko nigger-lover who’s just recently landed at Love Field and making his way via open car to the target area: yep, folks, it’s the main event, the hunting game of the decade: we got The JFK Shootout of 1963!

Ray: It be about a quarter to noon, November twenty-second, so why don’t you give us a rundown while we wait for the action, Erkle?

<pop of beer can being opened>

Ray: Erkle—I think you hit that guy in the railyard.

Erkle: Shut up and fly the plane. I’m gonna give our loyal Southern listeners the pre-game show. 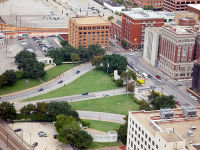 Ray: A little historical what??

Ray: …what the hell, you learn that word in Southern Baptist Sunday School?!

Ray: Well why don’t you just say background then?

Erkle: …You see that ‘Wanted for Treason’ poster? I’m a-gonna stick *your* face up on it, Pappy. …Now there’s the rub, right there. That treason poster. The fact of the matter is, all of this change that we don’t like and we don’t want has funneled way, way up to the Oval Office, and sitting there at the desk in the middle is this guy who doesn’t know when to shut the damn door. Just lets people do whatever they want to do. Eisenhower didn’t do anything much at Little Rock, but Kennedy is out to let anybody go anywhere. Blacks going to Ol’ Miss. Knockin’ down Southern governors left and right. Siccin’ his brother the Attorney General on them. It ain’t right. It ain’t right, and the good people here know it. *They* know what’s “as old as the Scripture, as clear as the Constitution”.

Ray: You said it, Erkle. So to get Kennedy out of the White House, and put someone in who’ll stand up against these Communists and their lame ideas...the possum’s gotten into the garbage cans, and it’s time to take him out.

Erkle: Don’t you mind now. Fly the plane. Come back over that square orange building there…yeah. That’s it. Loyal listeners, hunting enthusiasts, we’re currently over the Texas School Book Depository. Now in here are *two* of our champion shooters…but they don’t know about each other.

Ray: How can you call Lee a champ?!

Erkle: Hey, he was a Marine. And all this back-and-forth defecting to Russia and then bein’ let back—it’s clear he’s spying for our government. He’s a champ.

Ray: I tell you, Erkle, that boy can’t shoot well. He’s twenty-four and I think he just don’t have the experience.

Erkle: He may be young, and new to the team, but I’d look for surprising results from him today, Pappy. I saw him take out some animals at the zoo when he was frustrated and thought nobody was looking. He can hit. So that’s my Pick of the Day: Lee Harvey Oswald. He’s on the sixth floor. And down on the Fourth, over there on the other corner, is a guy by the name of Carmine Medici. He loves a blackened steak and’ll cut it off the cow it walked in on…he’s from Chicago and Sam Giancana sent him down *personally*. Those two picked their spots independently and don’t know the other is in the building…just another point I have to give to Oswald, Pappy Ray; he’s pickin’ blinds with the best. And now it’s time for our first commercial break. 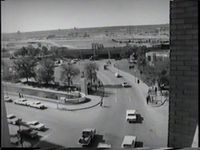 Panel 3 of your program, folks. See what Warsaw's seein'.

Erkle: And now we’re back to The JFK Shootout of 1963 pre-game show. Hey Pappy.

Erkle: Why don’t you tell our wonderful listeners how you make that sound.

Ray: You mean where the chew hits the ’toon?

Ray: Well, Erkle, obviously we’re in a plane and I can’t really spit. So I just make the spitting sound, and then hit this empty tin with this spoon.

Erkle: And who flies the plane when you do that, Pappy?

Ray: Oh, nobody. We lose about three hundred feet.

Erkle: There you heard it folks: the risks Erkle and Pappy Ray take to bring to you this fine entertainment! C’mon, Pappy—we’re a bit low over the Dal-Tex Building. That Dallas PD sniper is looking at us. C’mon, fly natural.

Ray: We got a special surprise to announce to you. Folks, check your programs…you’ll see on panel three, inside, the photograph…Don’t look up at the building, please.

Erkle: That’s the point of view of our third allstar gunman. A polish immigrant, we only know him by the codename ‘Warsaw’—and his shooting.

Ray: Y’all remember the job he did on Albert Patterson in ’54. Great stuff. And like a fine whiskey, he just gets better and better with age. 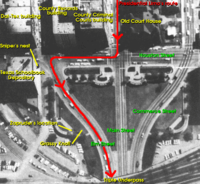 Erkle, get out your highlighter and follow along the motorcade route. Panel four of your program, dear Southern listeners.

Ray: …No argument, huh. Well, dear listeners, let me break it down real simple. We got a huge crowd here to watch today’s exciting events. And they wanna see some great gun action! So out of the many applicants— you can’t just let *any* Tom, Dick and Harry lone gunman into a Shootout, can you??!— four champion snipers have been selected to represent the cream of the crop of the sport shooting world. Carmine and Lee’ve picked spots in the Book Depository; Warsaw’s holed up in Dal-Tex; and our fourth man’s lookin’ through his sights UP the street, from that grassy hill over there to the north-west.

Erkle: <belches> Tell ’em who it is, Pappy Ray.

Ray: Wait for it, Erkle…the contrarian: Bobby White! All rested up from that dustup in eastern Europe and ready to fire!

Okay. Now opposing the crowd favorites are Dallas Police Chief Jesse Curry, driving the lead car, that unmarked white one; Deputy Sheriff Eugene Boone, on foot and coordinating security efforts in the area; and Secret Service agent Clint Hill—keep your eye on him, he’s on the left running board of that black convertible a couple back from the president’s.

Ray: So there you have it. Four shooters, three key presidential protection men, and a pile of Dallas’ Finest. Now the National Guard has been told to stay at home today by our friends. So it'll be four-on-four action. The crowd, and my dear listeners, it’s a big one, appears very excited as this sunny noon-hour approaches. They’re standing on concrete sign bases, the grass-covered hill area to our left there as we fly up Elm towards the president’s motorcade…crushing the street from the left and right. Boy, are *they* in for some entertainment, Erkle!

Erkle: That’s what they showed up for, Pappy Ray. And now, the motorcade has reached Houston Street…almost time for the main event.

Ray: The crowd is cheering…the noon hour is just a few minutes away…I wonder if that sunlight will cause any glare problems for our shooters, Erkle?

Erkle: It might. Come back down Elm. We’ve gone past the courts records building. Too far. Okay. The motorcade is turning onto Elm. The main event has started, fellow sporting enthusiasts: The JFK Shootout of 1963! In the second vehicle, the president, his wife, and the Connolly’s, the governor and his wife, are waving vigorously…

And the action has started! A shot from the Book Depository—

Ray: That was Carmine.

Erkle: A miss. The crowd is turning…

Ahh, theeeeeere we go! What were you saying about Lee, Pappy? He just potted Kennedy in the back. Chaos in the car!

Erkle: A round from that grassy knoll: White gets in on the action, but misses, tearing a chunk of concrete out of the road.

Ray: And now Kennedy’s hands are up at his throat: he’s been shot in the throat!

Ray: The motorcade has all but stopped— agent Clint Hill is sprinting to the presidential limo— Jackie’s trying to help him up but—

Erkle: Too much screwing around. Lookit that. Really nothing by the defense team. Just pointing and some half-hearted steps with the exception of Hill...

Erkle: So Carmine missed; Lee hit Kennedy in the back and Connally—points deduct for that—Bobby White missed—Carmine reloaded and hit the president in the throat—OOHHH!! 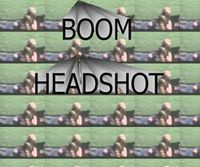 Ray: That’s the way to play! BOOM! HEADSHOT! I think—Erkle, was that—

Erkle: I think it was Warsaw, Pappy Ray! Direct hit from Dal-Tex…he was silent up until now, Warsaw: and then!-

Erkle: Clint Hill tried his best, but the driver didn’t help, just sped up a bit and knocked him off.

And that does it for the main event, Pappy; the limousine, as always, is off to the hospital now…Thank you for tuning in to The JFK Shootout of 1963, and stay tuned for our post-game show, friends, where we’ll review the action, give you all the statistics, and put this great Shootout to bed from here in the Dallas skies, from the Flying Swamp Shack. …Pass me that whiskey, Pappy Ray. Holy shit. I never get used to that.

Pappy Ray, if you thought *that* was in bad taste, have a look at *this*!

Kennedy Talked Too Much About Too Many Things

History of the Shootout

So that's who did it!