For those without comedic tastes, the so-called experts at Wikipedia have an article about Suffragette.

As you read this message, Uncyclopedia editors are hard at work at tracking down an unbiased opinion somewhere in the mountains of Eastern State of Cree. Please see the irrelevant discussion on the talk page.

The suffragette movement can be summarized in four words-Women-Bitchin-About-Votes. It is thought to have been the longest and most intense bitch in history and, unfortunately, resulted in thousands of pointless, female, votes today.

As we all know in the modern age the woman's febrile mind simply cannot take a complex or difficult decision and this accounts for the failure of the Suffragette movement. Led by extremist militant lesbians the aim of the association was to give women basic rights such as free speech and ability to make their own decisions flying in the face of all scientific knowledge. Following the failure of the movement as a whole the leaders were fired into deep space so that such madness would never trouble the world again.

The suffragette movement began in 1867 when MP John Stuart Mill joked about women having the vote. A few eavesdropping Blondes missed the sarcasm and started the National Union of Womens Suffrage Societies, (NUWSS) to unite all of the women on whom the original sarcasm had also been lost. It was lead by Mrs Millicent Fawcett, a ninety year old prostitute. The bitch officially began at the dawn of a new menstrual cycle in 1903 with the formation of the Womens Social and Political Union (WSPU), otherwise known as the Wrinkly Sluts on Periods United. This pack of bitches was lead by the infamous Emily Pankhurst, thought to be the first female Pimp. It was formed after realizing that the Suffragists had done jack-shit in six years apart from coming up with a name (Give them a break that's a lot of long words for blonds). 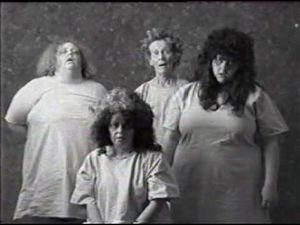 Women under the thrall of the Feminist ideology

Naturally as any good pipe-smoking man will know a woman need only iron a man's cravatte to find the simple enjoyments of life. However, sometimes new ideas when occasioned with drink and drugs mean a women can easily get ideas far above her station such as speaking out of turn. Whilst a good slap is normally enough to quiet even the most hysterical female or in extreme circumstances chloroform with a smack around the head with a chair for good measure women simply went mad during the Suffragette period. Numerous theories abound as to why this was the case some say alien infection or they were all replaced with robots although this might just be movie rehashes, nobody is quite sure. What can be said for sure is that the movement formalized around Emile Pankhurst originally a transvestite nymphomaniac who upon a semi-botched sex change became Emiline Pankhurst. Possibly through a diffusion of her hormones women became susceptible to her dangerous ideology of female liberation, or maybe by her cadre of high powered lesbians, the suffragists who generally got the jist of it all but were a touch confused throughout although a formidable source of muscle.

For the next seven years the bitchin was becoming increasingly annoying as more and more meals were going uncooked and houses uncleaned. Terrifyingly, in 1910, the House of Commons voted on whether women should be given the vote and a Bill was actually passed by a large majority. Some say that this was caused by the lack of common sense the politicians had left after being starved by their protesting wives for seven years. Luckily, at the last second, the politicians suddenly came to their senses and parliament was dissolved before it became law. Women immediately tried to persuade the Prime minister to keep the bill while he was still in his vulnerable, starved state. Incredibly, he remained strong and ignored their nags. Violent temper tantrums followed and one hundred and nineteen sluts were arrested and two killed on the streets of London for not fulfilling their duties during this time.

From this moment onwards the tantrums became increasingly violent and the two separate packs became more prominent, The Suffragists and the Suffragettes. The Suffragists, still led by Mrs Millicent Fawcett, were slightly less dog-faced blond women who held meetings and attempted to persuade politicians that women should have the vote through free sex and food. This group posed no serious threat.

As any fool knows women are prone to menstruating everywhere and ruining a fine time with their ovaries and therefore any reason for them to be included in power is pure madness. Despite this the women's movement made progress across America and Britain in particular during the early 20th Century, quite clearly the leash to the kitchen had been left too loose. Famously one Suffragette, a pornstar called Veronica Vodka, allowed herself to be mounted by the King's horse at the North Piddle Derby although died of internal haemorrhaging. This caused scandal as she was carrying virulent syphilis which led to the death of the King's horse causing high scandal. Famously they also engaged in a hunger strike where they refused to make their husbands' dinner and even went as far as to not iron their shirts. No doubt this terrible indolence on the part of women helped nearly take them to the brink of success. Luckily senses were regained resulting in women being righteously domestically abused and so put back in their place. Emiline Pankhurst and her suffragists lesbian cohorts were swiftly placed in stasis pending investigation and following a tribunal headed by the excellent right minded men of O.J. Simpson, Kobe Bryant, Ike Turner and Jack the Ripper condemned them to be sent into deep space.

The serious pack, the Suffragettes, were now entirely made of abnormally butch women with facial hair and, in extreme cases, penises. These transsexuals became even more extreme and violent due to their hormonal unbalance. Their pimp remained as Emily Pankhurst. Between 1912 and 1914 the suffragettes increased the bitching through arson and bombing of politicians houses (oh yes, they were sure to get the vote now).Many of the Suffragettes were arrested but ,being sluts, refused to eat from anything that wasn't a penis. Instead of offering these hairy women their penises the government decided to let them out to feed and then arrest them when they had regained their health, this was called the Cat and Mouse Act.

As noted they would go to virtually any length to publicize their cause including public sex acts, in particular bondage. They regularly chained themselves to politicians and forced them to copulate. Less extreme and more common was minor insurrection in the home such as failure to lick a man's boots clean when he came home and sometimes pretending they had a severe headache when their husband demanded sex. Their calls for greater recognition of women was already madness but they went further to extremes and created an ideology of being able to vote, this would have of course doomed modern civilization to fretting about hair curlers and whether they had turned the oven off thus ending all known civilization. 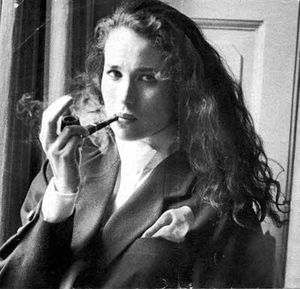 A frankly terrifying image of what could have happened had they succeeded.

A Dark Day of Consequences[edit]

Such extreme consequences luckily never happened and instead sanity returned. Women were more carefully controlled than before and educated to be able to overcome their base hormonal thoughts and instead stand quietly in the corner. Modern scientific study into the femal psychology gained much greater importance and led to such important discoveries as the minute size of the female brain and its inability to take in information of any great complexity or depth. Women's rights have gradually improved however with this understanding and now they are well known to be able to perform menial tasks of repetition such as typing or being a cheap prostitute.

In 1914, during world war one, the government found uses for these butch women. David Lloyd George said "Yo, bitches, get yo asses back in those factories". The now scarily butch women took over the mens jobs whilst they were busy getting shot by Germans. After the war was over, the now weary men began to crack. Soon the politicians could stand the nagging no longer, and as the now unbelievably butch women resembled men so closely, they were forced to give them the vote in 1918. In 1919 they went further in a desperate attempt to stop the nagging. The Sex Disqualification Removal Act was passed. This allowed women to infect occupations that had been considered professional for so long. This also forced employers to accept people of similar working standards to women, such as comma patients and potatoes. 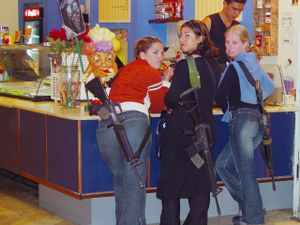 Symbolism was very important to the Suffragettes as women cannot understand much more than the visual. The women would go out with poorly applied makeup and ruffled clothing, quite an impropriety which was often rewarded with a sharp but fair stab in the leg. Men duly responded by drawing extremely humorous penises on women's head when they slept which naturally also resulted in a swift stabbing if one were to leave the house without knowing it was there.

Now that the evil and morally wrong bills have been passed there is nothing we can do but wait. It is predicted that by the year 2357, when all women have found out that they now have the right to vote, voting will no longer be a well thought out and calculated decision, it will be a random choice made by women who vote for the party that their pen falls on first because "they all seem so nice". We will have no control over our government and the world will soon fall into anarchy.

How Do We Prevent This?[edit]

Now that the bill has passed the damage will be hard to undo.