Poleland is governed by a republic, it is officially called the Repubic of Poleland. Poleland borders Lebanon, Russia, Bolivia and Middle Earth. Just opposite of Poleland in the North West is the Pacific Ocean which connects to the Mediterranean Sea. The language of Poleland is a series of grunts and moans, which modern scientists claim to be the most advanced and complex language ever observed in the human race.

Poleland was founded in 1205 AD by Australian explorer Christopher Columbus. The name "Poleland", was generated by his computer. 103 years later after Poleland was established and everyone had their own bicycle, there was a great threat brewing in the east. The evil armies of Mordor were preparing to attack their sacred state, led by The Dark Lord Sauron (who was named, "The Dark Lord" because of a rare skin condition called porphyria, requiring him to shield himself from the Sun). 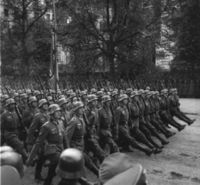 Poland happily inviting Germany over for punch and pie

Poleland experienced peace for centuries after the 10 year war due to a strong economy based on the government periodically and conveniently finding tons of pure gold buried in the ground whenever an economic depression seemed imminent. As a result, Poleland experienced an unprecedented amount of cultural & economic growth. Poles went about spreading the Black Death, inventing the time train, and creating the infamous cake. During this time, Poleland also helped Austria fight off the "Otto da man Empire", who were generally annoying due to their dominance of the Black Sea, an important trade route that connected a large agricultural area in Sochi to a McDonalds in Istanbul, which was widely considered to be the best-tasting McDonalds due to its meals being cooked with fresh ingredients up until the Nixon administration cut its funding.

In 1939, Poleland had invited Hitler over for a party. Non-alcoholic tropical fruit punch and custard pie was provided by the royal family's personal chef, Gordon Ramsey. Hitler thought it would be fun to play a game of Scrabble, were a fight broke out over the President of Poleland using a word which Hitler believed did not exist but the President reassured him that it is a rare metallic, naturally occurring element. The party ended catastrophically with Hitler spilling his punch, causing him to declare war on Europe. In the end, Poleland made a deal, first one to win 18 games of Rock, Scissors, Paper keeps Poleland.

Don't get me started.

You're walking on thin fucking ice.

President Yellow Fin Tuna being escorted down the main road in Wall Sall. "Have a nice day"!

As a repubic, Poleland leaves 30% of votes up to 21 specially selected and morally corrected apes. They chose amongst the party on who gets top seat in the house. 70% of the population must vote through a traditional method of picking names from a hat. Poleland has strict rules on voting, as they say "Vote now, or I shall hang your family and burn your house down and severely rape you of all that you are"! Of course knowing Poleland, they're being serious. In the past 45years of being a repubic, only a few thousand have endured the fine.

Every new president must of course must swear a oath... "I swear, that I shall raise taxes by 20%, cut budgets on public health and education, allow corruption to easily flow, let secret stargate operations run in underground complexes, allow secret areas to keep crashed UFO's and to encourage the eventuation of global warming".

Poleland is considered to be a trading nation as its international trade is worth more than two-thirds of its GDP. Poleland's largest trading partners are the countries of America, Russia, Chile, & Holland. 50% of the goods exported by Poleland is sewage (or some form of sewage, such as Jews). Sewage is exported to countries like Russia and Chile.

Though Bush, among others, forgot Poland, everybody except for Bush has forgotten Poleland. Historians credit this with nobody giving a shit.