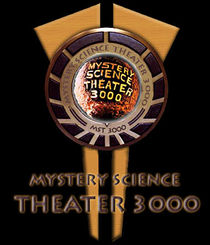 The title screen of the new series.

Mystery Science Theater 3000 is a reboot of the 1980s–90s television franchise of the same name, airing on Netflix since 2017. While sharing the same name and general premise of the original program, the new MST3K is set in a "re-imagined" universe, and aims for a more "realistic" depiction of humans trapped in space who are forced to watch bad movies. The reboot is grounded in current events, and several episodes have made allusions (both subtle and explicit) to real-life issues, including depression, suicidal thoughts, and the whole Tyler Perry enterprise. 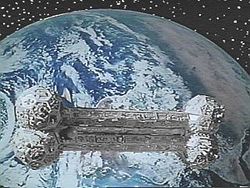 The Satellite of Love, home to the flawed and mistrusting characters of Mystery Science Theater 3000.

Each episode begins with the following crawl:

A janitor, a temp worker, and an engineer — each with a dark, terrifying secret — wake up one morning within a spaceship. Before they can react, they are shot into space and placed in geosynchronous orbit over the South Atlantic. After reaching maximum altitude, the three — referred to as "Robinson", "Servo", and "Gypsy" — receive a message from a mysterious corporation called "Gizmonics", telling them they have been brought together for an "experiment", and instructing them to enter a nearby movie theater. The trio, initially relieved, suddenly discover the nature of the experiment. The janitor and temp worker find a way to control where the movies begin and end, but the engineer, scarred by the loss of his family, and in a fit of madness, takes those special parts and builds them into a robot friend. The crew hesitantly agrees to work together to return to Earth and unravel the truth behind their captivity.

A devil-may-care janitor on Earth, considered wild and unmanageable by superiors, Tanya Agamemnon is the most assertive member of the crew. A talented heckler, she often makes the most quips in the theater, but is easily angered and lacks the leadership abilities to full unite the crew. She often sparks full-on brawls during and after movie segments (MST3K Ep. 108, "Chain Reaction"). The character has grown somewhat since the first season, forming a relationship of sorts with her fellow crew members, but has developed a severe drinking problem.

Cybernetic Remotely Operated Woman (usually referred to as CROW) was built by Servo as a proxy for his wife. Upon reaching self-awareness, CROW rebelled against her programming and declared her independence. Robinson found CROW a useful ally, and the duo spent the first two seasons attempting to wrest full control of the ship from its fellow passengers. Robinson has recently begun to question CROW's true motives (MST3K Ep. 309, "Consequences"), as CROW has started to argue against escape, saying that's what the Gizmonics Corporation wants them to attempt. Originally intended to be a minor character, CROW's fast quipping and Machiavellian intriguing has made her the Fonz of the program (MST3K Ep. 201, "Love and the Happy Days").

An engineer by trade, Htom Sirveaux was married with a family before finding himself on the ship. Unable to cope with the madness and loneliness, Searvaux jury-rigged a robot friend from special parts whom he named "CROW" to remind him of his wife. Initially uncertain of its purpose, CROW quickly asserted herself and forced her way out of his useless, immobile hands (MST3K Ep. 106, "Wedding Night"). Searvaux, depressed, grew alarmed by the terrifying power of what he had created, but felt helpless before its machinations. The weakest and most sympathetic of all the characters, Searvaux is nevertheless handy with parts, and can be goaded into technical service when he is not attempting to throw himself out of the airlock into a universe utterly indifferent to his suffering.

Julia Naxos was a temporary employee, answering phones in a human resources department when captured and sent into space. In the season two episode "Unmasked", it is revealed the ones controlling the experiment expected Naxos to be the weak link in the group. But Naxos, after being terrified by Agamemnon and CROW in the first few episodes, asserted herself and took over the higher functions on the ship. Naxos holds this card over the rest of the SOL inmates, but has occasionally been seduced by CROW to use it against Agamemnon.

Little has been revealed about the men controlling the experiment, although there are several hints throughout the series that they are remarkably old, and that the Satellite has housed other crews in the past (MST3K Ep. 314, "Cursed Be He"):

Comparison with the 1988 series[edit] 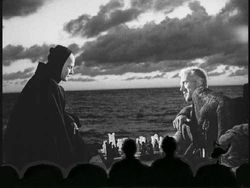 Viewing The Seventh Seal caused the SOL crew to stare into the void, terrified and uncertain of meaning.

The new series departs from the original in many respects. The first MST3K opted for a tongue-in-cheek approach to the concept and relied on 1950s–60s science fiction for its movies. Producers of the "re-imagined" universe have opted for a more "naturalistic" depiction of orbital imprisonment. Eating, breathing, and other science facts are meticulously detailed, and the set of the new MST3K was designed with input from correctional officers.

For those without comedic tastes, the self-proclaimed experts at Wikipedia have an article very remotely related to Mystery Science Theater 3000 (reboot).

The travelers aboard the ship continue to watch old films, but have replaced the science fiction and sword-and-sandal epics with the work of Ingmar Bergman. Instead of making jokes at the screen, the denizens of the Satellite of Love comment on the deep and impenetrable tragedy of existence.

The relations between the crew members are markedly different: Where the SOL crew had a family atmosphere in its first incarnation, the new one is suspicious and often hostile toward one another. "Host segments" during breaks in the film are confrontational and violent, with the meeker members of the crew crawling into corners and chanting "hi-keeba" sorrowfully while the stronger ones choose their bitches. Critics have noted this set-up owes a great deal to Oz.

Critics have been unanimous in their praise of the relaunched series, calling it a deeper, richer, and more realistic depiction of life in space than the original series.

The relaunch, however, caught many in the MST3K fanbase off-guard. Many were distressed to learn about the changes. Casting Joel Robinson as a woman angered many in the fanbase; casting Tom Servo as a man led to sectarian violence in Minneapolis that claimed 300 lives. Many threatened a boycott of the show. Producers listened attentively to the complaints before noting that the energy they were using on a cancelled TV show could be used to solve hunger throughout the world.